At this point, Batman stories are still camp  , and in the vein of the hugely popular Batman TV show. But this is one of the last such stories, as Batman will soon become a more serious, darker character.

The Masquerader himself isn’t that campy. But the story’s basics are firmly tied to Silver AgeSuper-hero comics from the late 1950s to the early 1970s Batman. This makes it difficult for the Masquerader to have existed post-Crisis on Infinite Earths.

(Difficult but not impossible. Especially if you adopt the Grant Morrison view that there was a strange, brief era early in Batman’s career that echoes Silver Age sci-fi weirdness).

Sam Tweed is an adept tailor.

He seemed to be in adequate shape and familiar with basic handgun operation.

During his Masquerader plot, he used some speciality fabrics and materials. But these likely were researched specifically for this occasion. Since the late 1960s Batman costume seems made of ordinary fabric, without the terribly expensive speciality materials seen in later versions.

As the Masquerader, Tweed used :

The Masquerader was also assisted by a gang of brawny, capable toughs. 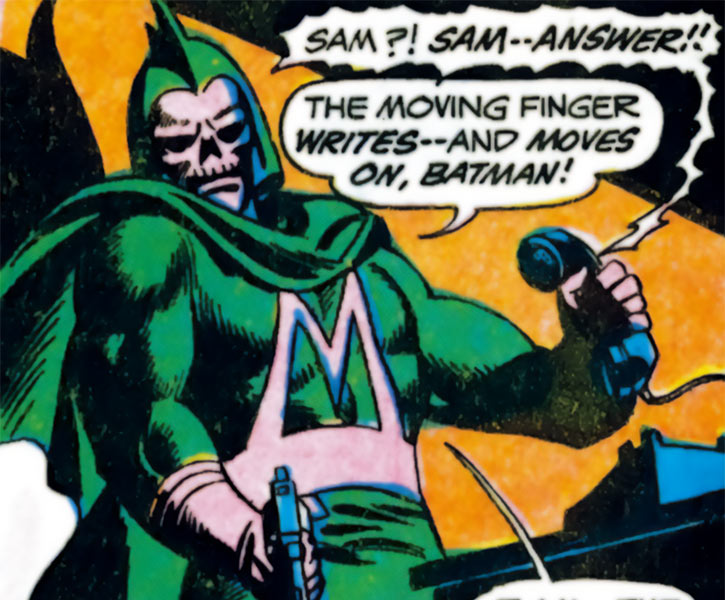 Labouring in the shadows, Sam Tweed was Batman (Bruce Wayne)’s tailor. He was the one making his distinctive costumes. Tweed would take orders over the phone, and deposit them at Commissioner Gordon’s precinct house.

(Back then, Batman was a close ally of the Gotham City Police Department. He was even given free rein to investigate special cases.)

But Tweed grew jealous, and weary of providing garments for others to shine in.

He thus came up with a strange plan to eliminate Batman. From there he could take over as Gotham’s newest master of crime !

To fit the part he tailored a scary, embiggening costume for himself. This was the Masquerader persona.

As the Masquerader, Tweed did the usual thing – sending clues to Gordon to lure Batman to crime scenes.

His gang would then focus on ruining Batman’s costume. Then the Masquerader would escape, using the fact that he seemed too large to fit his prepared escape route.

Once the Batman ran out of costumes, Tweed sent a booby-trapped replacement costume.

As the Masquerader, he also pretended to have found and murdered Sam Tweed. Because Tweed’s name was on the label found on shredded parts of the Batman costume. 🙀

This trick was to force Batman and Robin (Richard Grayson) to split, by giving them two urgent leads.

The Masquerader then confronted Batman under a large, ceiling-mounted infrared lamp. This heated and dried Batman’s booby-trapped costume, incapacitating him.

However, Batman managed to produce a pen laser from his utility belt, and shoot it at the ceiling. This activated the sprinklers, rehydrating his costume.

From there Wayne easily defeated Tweed, who was never seen again. 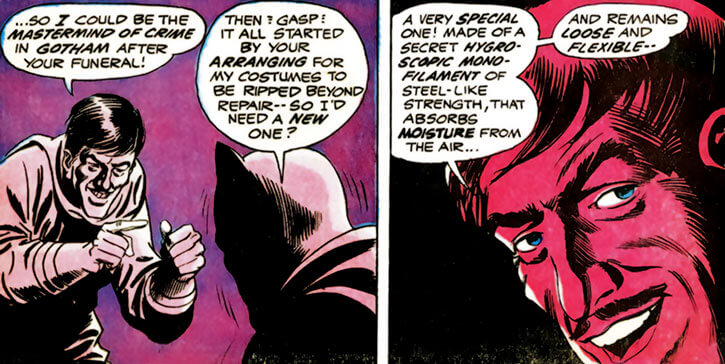 Overconfident, overdramatic jealous jerk who thinks that he’s all that.

The Masquerader costume might also have APs of Lightning Immunity. 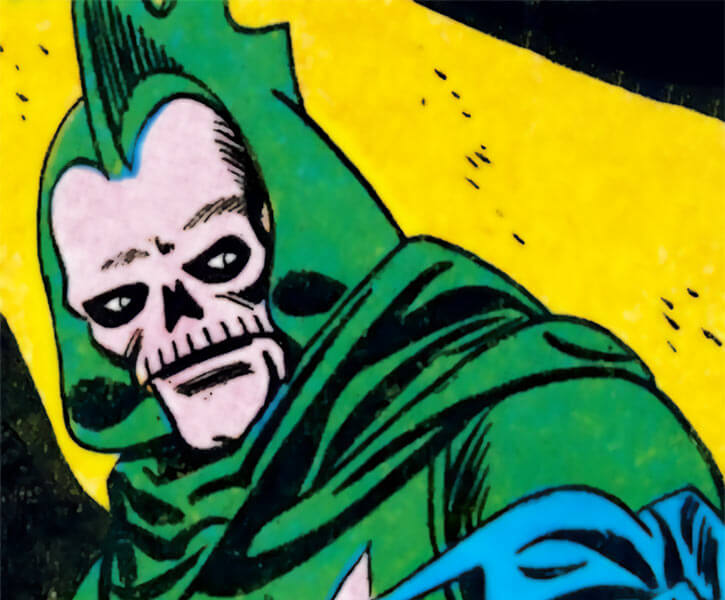 Lost in a masquerade

The Masquerader’s gang were pretty tough guys. They could reliably hit Batman and damage his costume. They generally held their own against the Dynamic Duo. How to model that ?

The booby-trapped costume, once dried by the infrared lamp, started reducing Batman’s DEX and STR, then do Physical Attacks against him.

There isn’t much material to analyse. But the proposed Numb Power should work, though it did Killing Combat. Batman was almost entirely immobilised and powerless within four or five Phases.

This uses our usual method of giving minor characters only the scores they need for the story.

Were it a 1980s Mayfair Games sourcebook, the Masquerader would likely have higher Attributes just because he wears a costume. If you prefer this approach, just grab a stats block for a comparable character from Mayfair’s Batman Sourcebook.

No Growth for the Masquerader costume, since the effects were almost purely cosmetic. And the protective capabilities were beyond what one AP of Growth grants.

The costume might offer protection against more attacks. Here we stick, as usual, with what was demonstrated.