It is firmly based on popular swashbuckler serials, films and novels such as those written by or inspired by Alexandre Dumas  or Paul Féval . Plus a helping of Zorro.

Over the decades it became a sprawling historical graphic novel set during the early 1600s with lots of adventure, swordfights, melodrama, court intrigue, etc.. It also occasionally doubles as an History manual.

It is also noted for the portrayal of its heroine, Ariane de Troïl, which was slightly ahead of its time.

It started as Masquerouge, a simple capes-and-rapiers comic published in working class children’s comics anthology Pif Gadget  in 1978. The authors arced back to this story during the 1980s, publishing a series of graphic novels as a prequel then sequel to Masquerouge.

This series, Les sept vies de l‘Epervier is much more detailed. Especially when it comes to characterisation and historical research. Further series of graphic novels in the same universe and with the same cast followed.

About the WORG translation

Masquerouge means “redmask”, but I indulged in a fancy translation. ”Damasque” is a pun on the adjective “damask” (“coloured like a rose”), which also calls to mind the Damascus steel  used in high-quality swords, the rose as a symbol of romantism — and quadruples as a wink toward well-known swashbucklers Fanfan the Tulip  and the Scarlet Pimpernel.

Oh, and it’s also a cognate of “Lady” (“dame” or “dama” in some Romance languages, and it radiated into other European languages from there).

If the fancy letter in heroine Ariane de Troïl’s last name throws you off, just imagine it’s written “de Troyl”. That makes no difference within the range of common English vowels.

This profile covers a fair bit of ground. It doesn’t feel too long since said ground is varied, but we’ve still split it in two halves for smartphone readers. The second half is there.

Ariane is a swashbuckling heroine, and thus :

She is also considerably stronger, faster, more charismatic, more dexterous and more intelligent than most of her contemporaries assume.

She is trained both in old-fashioned, Middle Ages-style knightly skills and in then-modern fencing. The latter seems to have a strong Italian influence, as she favours a rapier/dagger combo. But it is a French-style rapier, lighter and shorter than the typical Italian scherma sword .

Ariane is also a skilled cutpurse, and fairly stealthy. She has a lot of practice at kicking her male opponents in the crotch. And she is a good archer (a skill which may have been taught by Gabriel de Troïl when Ariane was a tween).

The comics and graphic novels follow a common swashbuckling genre convention. Namely, ordinary opponents such as city guards and low-rent mercenary swordsmen can easily be defeated by superior fencers, even when they come in packs.

Damasque’s pet sparrowhawk  has been described by onlookers as being “as big as an eagle”. This is clearly exaggeration. Still, its talons are vicious and it is an expert at fly-by raking faces, quite possibly taking out eyes.

When it’s not perched on Damasque’s shoulder or falconer’s glove, it is flying high and keeping an eye on her. Damasque doesn’t need to keep it hooded. 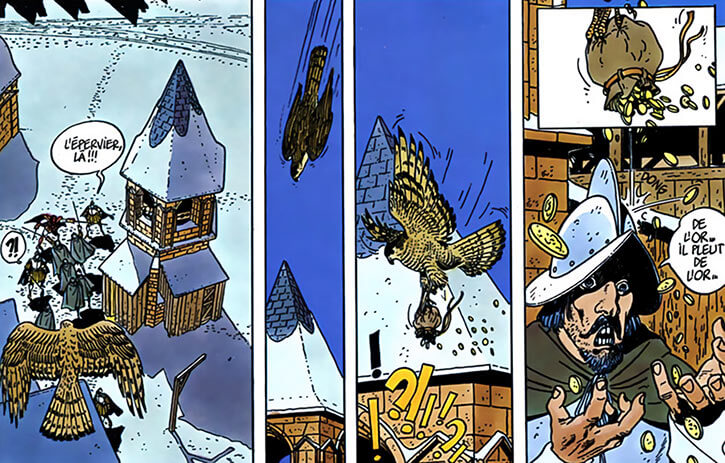 There’s something supernatural to how well the sparrowhawk can follow Damasque’s commands. It behaves much like a smart dog, in the sense that it will even react to yelled commands.

In fact it sometimes understands commands it was never taught, such as a screamed order to abort its attack. Like a dog, it will spontaneously attack to defend its mistress.

Examples of even more complex stunts are :

Given the role of “Merlin” and the crone (see below), the pet sparrowhawk may well be supernatural.

The de Troïl fictional lineage is minor nobility. It hails from the mountains of Auvergne , in South-Central France.

During the XVIIth century they were fervent Catholics. This was an important characteristic during the bloody French Wars of Religion  (1562-1598) between the Protestants and the Catholics.

The young knight Yvon de Troïl was sent to Paris by his father. His mission was to encourage the King of France, who favoured appeasement, to wage yet more massacres against Protestants. 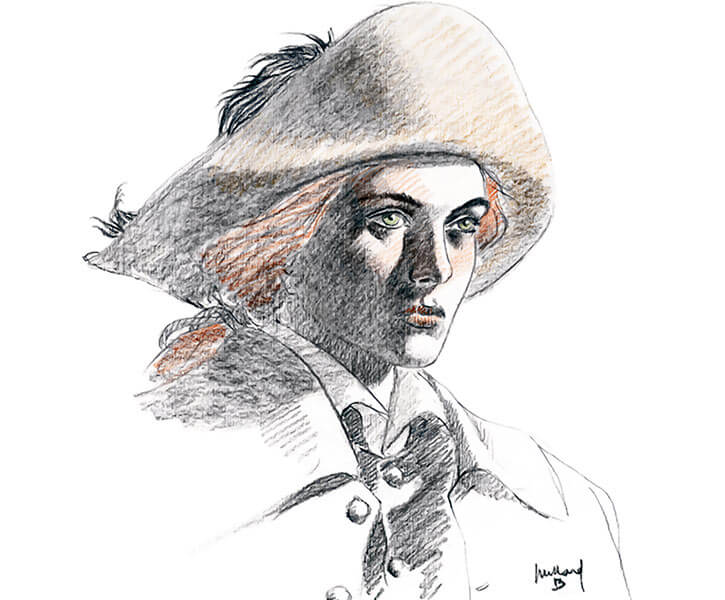 Ariane de Troïl as an adult.

As de Coligny failed to reveal himself as a demon upon dying, Yvon realised that his fanatical father had lied to him. Refusing to claim the “honour” of the kill, he displeased the King.

Yvon then randomly ran into Walter Raleigh , an English emissary in Paris. This soon led to meeting Henry, King of Navarre (the future Henry IV of France) and Queen Margaret. Raleigh and de Navarre hammered out a deal, and the young de Troïl thus became an agent of Henry.

(Walter Raleigh is the historical spy, explorer and general troubleshooter. He indeed lived in France for several years at that point. His biography during these years is nearly blank, allowing for the artistic licence of his involvement with Yvon de Troïl).

Yvon de Troïl is known to have been part of Raleigh’s travels in Southern America (and most famously his quest for El Dorado). But the details of these remain unrevealed. Though he eventually came back to Auvergne, the events of the St. Bartholomew left him a firm anti-clericalist.

Yvon’s younger brother Gabriel was a captain in the French military. He was renowned for his extraordinary swordsmanship. During his service, he became an acquaintance of three musketeers who would later achieve fame .

An habitual seducer, he became the lover of his sister-in-law, Blanche de Troïl. This may have begun whilst Yvon was away on his travels. She became pregnant in early 1601. But the lovers felt crushed by shame over their betrayal of Yvon.

On the verge of giving birth, Blanche thought that the temperamental Yvon was going to kill her. She ran away in a panic. She was killed when she stepped onto a frozen lake. However, Blanche survived long enough to give birth and protect her baby girl, whom Yvon and Gabriel found in time. 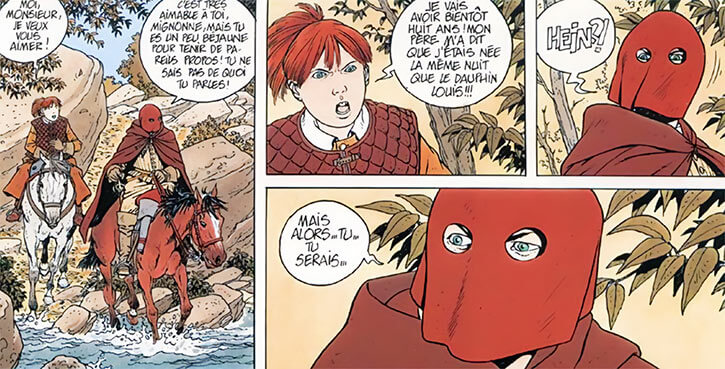 Ariane de Troïl at age 8, and Gabriel as the Sparrowhawk.

Ironically, Yvon came to think he had unjustly suspected his wife and brother, and that no adultery had taken place. However, he forbade everyone to ever talk about Blanche. Her son Guillemot and her daughter Ariane thus grew up without knowing anything about their mother.

Devastated, Gabriel considered his life to be over. But a blind crone convinced him to dedicate his existence to a just cause instead. She also gifted him a sparrowhawk, a symbol of courage, light and justice.

Gabriel de Troïl became a red-masked activist and outlaw fighting for the people. Commoners named this local Robin Hood figure “the Sparrowhawk” after the bird accompanying him.

Leonard the Glib-Tongued is an apparently immortal street artist and prophet. Among other things, Leonard claims to be the secret master behind at least part of French history. He has heavily implied that he is Merlin the Enchanter.

Leonard looked the same in a story set in 1554 and in stories set during the 1620s. He seems to have had a specific interest in ensuring, across several generations, that Henry of Navarre would become King of France.

During the XVIth century Leonard was accompanied by a pretty young woman of highly variable appearance. She served as his assistant as part of his street theatre act. Though she may be a Vivian/Nimue figure, she was apparently a mortal apprentice whom the self-proclaimed Merlin taught in sorcery.

Like Leonard, she knows the future. Both can also apparently summon and empower the spirits of the dead, as ghosts, and provoke hallucinations.

What’s in a bird

The blind crone is apparently the same woman, albeit decades later. She seems to be conducting parts of Leonard’s master plan. In particular she claimed that she is raising seven sparrowhawks, who will act as champions of justice and rebellion. 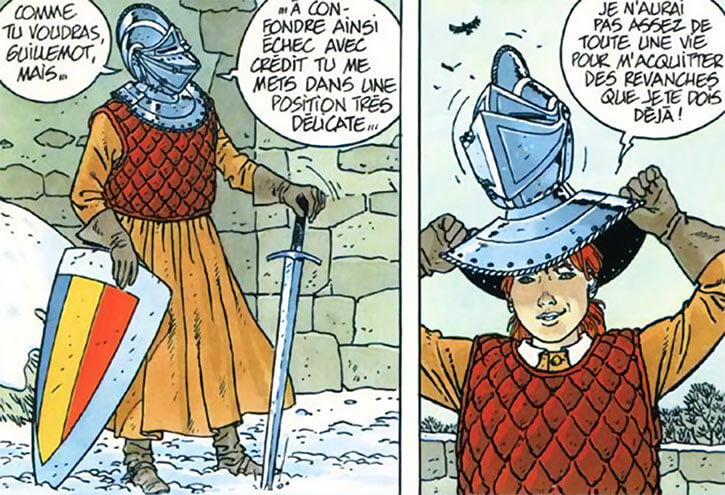 She is usually accompanied by a owl (symbol of secrets and wisdom) and a black goat (symbol of sorcery and Satan). The crone was apparently slain in 1625 by a crowd accusing her of witchery. But she had already recruited and trained a successor.

The crone all but stated that she served the Devil. Most of Leonard’s close associates think that he is the Devil as well as Merlin. This Devil, though, is more a figure of freedom and rebellion than of evil.

The “seven sparrowhawks” are in chronological order :

Ariane was born on the 27th of September, 1601. That was the same day as Louis, son of Yvon de Troïl’s master Henry IV. Yvon raised her in the same way as her brother – up to and including training in obsolete chivalry skills. Such as lancing and broadsword-and-shield fighting.

Ariane was fascinated by the Sparrowhawk. But she didn’t suspect that it was actually her father Gabriel. She even briefly met him when she was 8.

Ariane developed a romantic girlhood fixation on the red-masked Sparrowhawk. She crafted herself a makeshift mask out of a pumpkin. During a second chance encounter, she helped him escape after he attacked the castle of an abusive local nobleman.

The Sparrowhawk’s interest in Ariane led Yvon to realise that the masked vigilante was Gabriel. Therefore, Ariane was probably Gabriel’s daughter after all. Yvon secretly confronted the martially superior Gabriel in what was essentially a suicide attempt. But Gabriel refused to kill him and fled.

Ariane now routinely rode out to meet the Sparrowhawk. He became her friend but did not have the heart to tell her about Blanche – or that he was her father.

As the Sparrowhawk kept defeating his foes, it was decided that he was in league with Satan. Hyronimus the Persecutor, a fanatical witchhunter, was thus summoned. The inquisitor and the men-at-arms of local nobles invaded the castle of the de Troïls.

When it became clear that little Ariane would be tortured as a witch, old Yvon went berserk. He unexpectedly broke his bonds and slew most of the rabble in his castle. Ariane fled, found Hyronimus and shot him in the back. But the former Jesuit had already vanquished the Sparrowhawk and cleft away his left arm.

Gabriel reconciled with Yvon on the spot. However, for Yvon’s and Ariane’s sake he lied to his brother. He swore to him that Blanche had never betrayed him and that Ariane was Yvon’s daughter. Gabriel then left for Paris.

Though Gabriel intended to abandon his role as the masked man of justice, he first confronted the boy-king Louis. He encouraged Louis to be a fair and just ruler upholding the welfare of the commoners. Though the masked man was captured and lost an eye, the intervention had a strong effect on the 9-year-old Louis XIII .

Ariane was determined to see a new Sparrowhawk take the place of the fallen one. She captured a baby sparrowhawk in its nest and tamed it. She also crafted a red cloak and mask resembling the Sparrowhawk’s.

Despite her martial talents she assumed that, being a girl, she couldn’t be a warrior. Instead, she convinced Guillemot to become the Sparrowhawk. However, both were but in their early teens at that point. Thus, it was mostly play-acting.

Furthermore, she considered that Guillemot wouldn’t be ready until he could defeat her while sparring. And she simply was better.

Though eager to please his little sister and to prove his manhood, Guillemot was a failure as the new red-masked vigilante. He would have been caught in an ambush had his kid sister not bailed him out. Guillemot was killed in action a few days later.

While struggling against enemies of the Sparrowhawk, Ariane was raped by Germain Grandpin. Grandpin was a friend of Gabriel de Troïl who mistook her for some expendable commoner girl.

On the next day, Yvon de Troïl hung himself. He could no longer bear the nightmares and hallucinations about Blanche he had endured for more than 15 years.

The remainder of the entry — the rest of the History, the quotes, the characterisation, the stats, etc. — is in the next chapter. 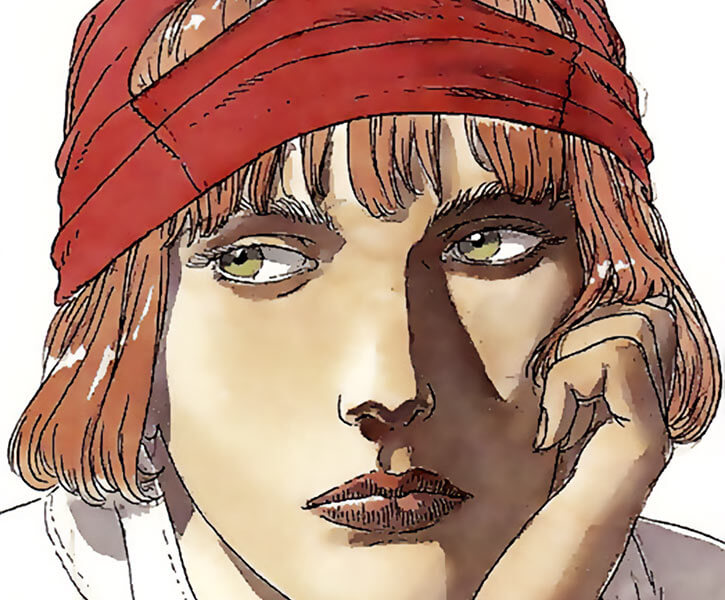 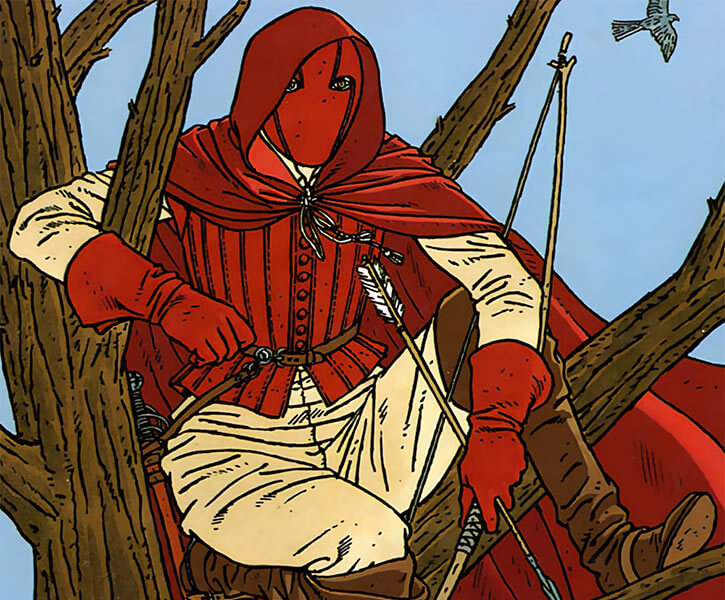 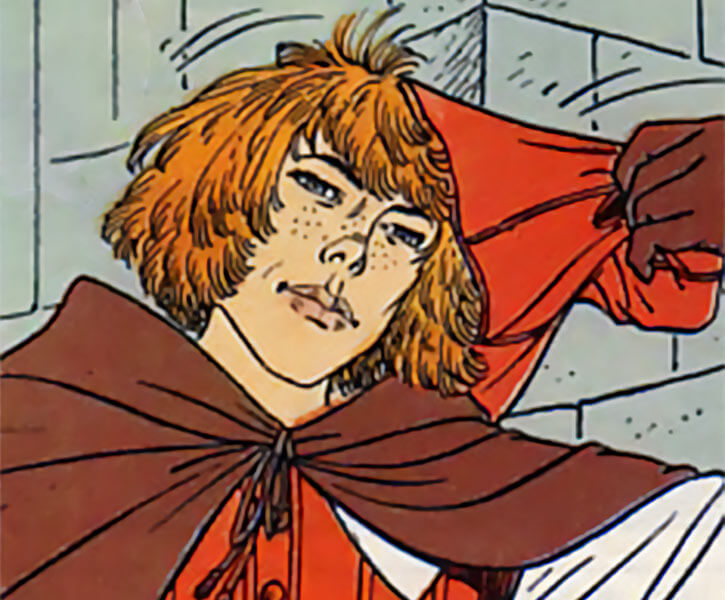 Ariane in her teens : 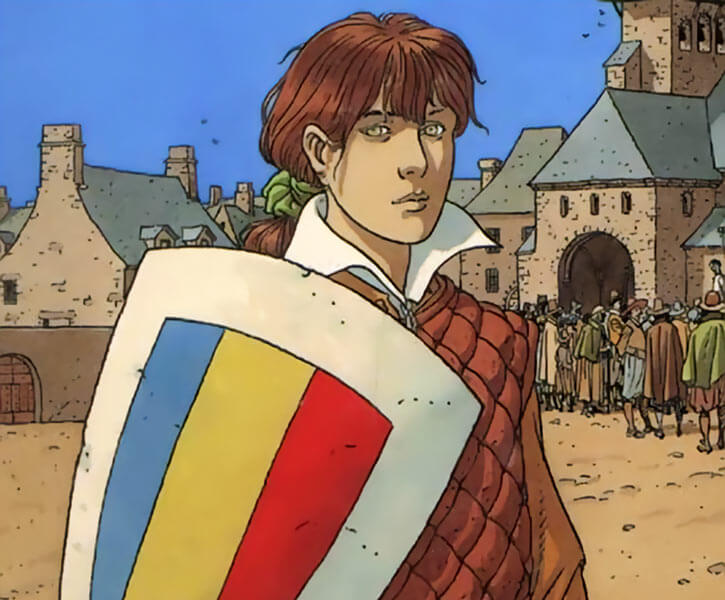 Gabriel de Troïl as the Sparrowhawk : 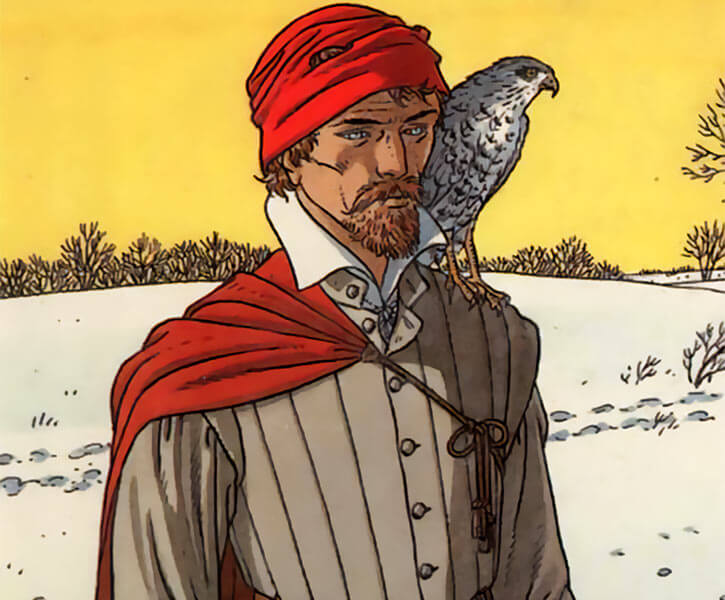