Mass Effect (ME1) is a landmark video game. But it dates back from 2007. That was a long time ago.

If you have a gaming PC, it is possible to dramatically improve stuff. It’s free, and it’s essentially a remaster.

I’m sure you can do something equivalent with Wine, with an AMD GPU, etc.. But I can’t cover this in a detailed, tested manner.

It is now obsolete. A remaster of the game has been issued, which means that 1/ a lot of this stuff no longer is necessary and 2/ specific tweaking guides now exist for the Mass Effect Legendary edition.

So we mostly keep this article around out of cheap personal nostalgia. Though I suppose that, somewhere, there are people that have the old ME games on PC but can’t/won’t buy the remastered trilogy.

And perhaps there is someone, somewhere who’s interested in how this type of modding was done back during the 2010s. Who knows.

Some good news. This guide isn’t a 500+ files Bethesda-style modathon.

More good news. The ME1 modding tools have been streamlined over the years, to accommodate the sheer percentage of people who don’t RTFM.

However, this guide involves a fair few tools and concepts. It’s not “push button, game falls out”.

Writeups.org isn’t normally a video gaming site. We have a mass of Mass Effect articles, but they are RPG character profiles.

However, taking high-quality screenshots of the characters often means a lot of technical tinkering. I’m thus doing Mass Effect tinkering as I prepare to revise our 2012-ish profiles. So why not publish my notes.

So now we have the basic, vanilla Mass Effect. Hooray. Woot.

Because of reasons, the changes have to be made in two (2) distinct steps :

If you want a broad view of what exists, you can check the all-time popular mods on the Nexus  . Just remembers that at this stage we don’t want graphics stuff such as C3Anderson’s MEIUTM, CreeperLava’s ALOT, Ottemis’ textures, etc.. These’ll come later.

A simple tool to handle the first step is the ME3Tweaks mod manager (download link)  . Despite the name, it can handle the entire Mass Effect trilogy – ME1, ME2, ME3.

When you install it, the first action it’ll have you take is a backup of your vanilla ME1 files. This is especially useful if redownloading about 8 gigs is a problem for you. Plus, when modding games, backups are always good.

For each mod you want to install, you’ll have to :

A simple example in one picture : 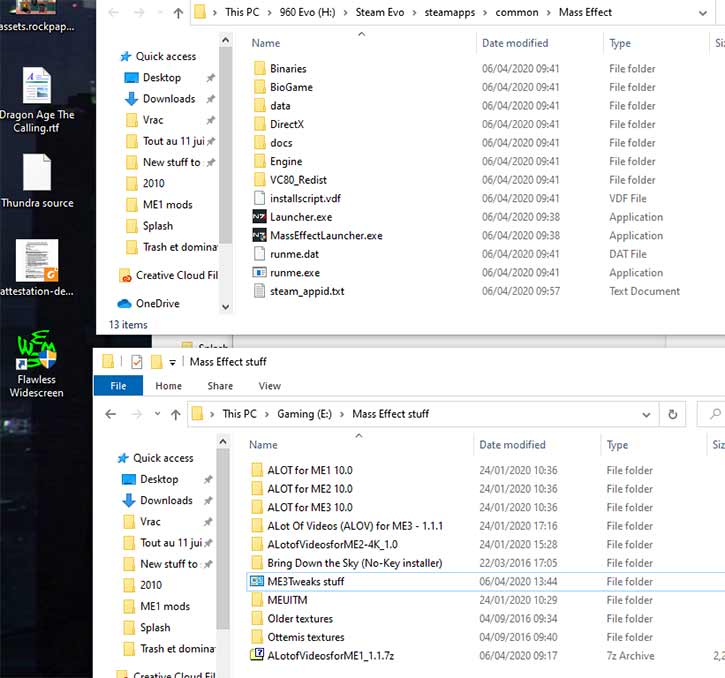 I have a folder where I store the tools and resources — Gaming (E:) → Mass Effect stuff. It’s on a large but old and slow hard drive.

On the side — my desktop — you can see Flawless Widescreen, which we’ll discuss later.

Suggested mods that go with ME3Tweaks

Suggested mods that are installed in other ways

No intro movies  . This one skips the corporate logos crap when launching the game. Drag and drop into CookedPC\movies as explained in the description.

Mass Effect overwritten  . Fixes a bunch of niggling inconsistencies in the texts. Drop the uncompressed DLC_XMEOw folder in Mass Effect\DLC. Then make an edit to the autoload, as explained in the posts for the mod  .

If you have an ultrawide display, jump ahead to the discussion of such near the end of this article. Then come back here on you have installed the software and mod.

If you have no idea what vignettes are, the Vignette Remover mod  explains it all.

Still, you *probably* don’t care. The ME1 vignette is primarily an issue when doing very specific kinds of screenshots, called tiledshots. Otherwise, most people don’t even notice they exist.

There are various cheat/tweaks/saves mods. I’ve skipped those since this article is long enough as is.

I don’t play with a controller so I’ve also skipped those. For lack of concrete experience.

Cut Content unlocker  is just extra guns and armour. And a good chunk are also restored by ME1 Recalibrated.

I haven’t tested Expanded Character Creator  since my Shep’s appearance is already set. Look at the mod’s Images tab to see what it can do. It does what used to require Gibbed software knowledge.

There are also pre-made Shepardses. If you’re utterly terrible with the character creator.

Once upon a time, making the Mass Effect .exe large-address aware was critical. But the MEUITM installer (below) handles that now.

Do a check now

So that’s all of five mods, plus perhaps stuff you decided to add.

Launch the game (from Steam or Origin) and verify that everything’s going well. We’ll also do a backup soon.

We’re going to use just two resources. These are MEUITM and ALOT. As you may have noticed, these are the two most popular ME1 mods.

Again, make sure you’re done with the other mods before you roll out these two.

Get the big files

We’re going to do the both of them in a single installer. It’s safer and simpler.

First, download the bigger files. Said big files can also be downloaded as torrents. If you can, get them as torrents.

FWIW, my own MEUITM choices are :

But while everything downloads you have time to decide what options you’ll install.

(Remember, we already did the A Lot of Videos mod.)

Note the green “configure” text in the MEUITM section, which some people miss. That’s what you click on to pick the options.

Installing and checking all those textures and lights and shadows and whatnots will take a while. There are several gigs of those, after all. Go do push ups, maybe ?

Do a check now

Launch the game (from Steam or Origin) and verify that everything’s going well. Just to be sure.

Yes, the “splash” picture at launch is now different. It’s the MEUITM one.

Also, do notes that these mods change the textures, not the *meshes*. The objects and character models still are somewhat low-poly by 2020 standards. But the details, the lighting, the shadows, the texture depth, etc. all were overhauled.

The opening cinematic, with our custom Shepard, in 2160p.

I pushed the image quality at the clear expanse of framerate, to test textures/lighting/shadows.

There are two kinds – the control panel and the driver injection.

A “full output dynamic range” means a greater range of colours on the screen. This usually means a more vivid image.

If you want to watch YouTube videos about it, here you go .

Here we’re going for an aggressive setup. Since the game is 13+ years old and we’re assuming a recent GPU. Launch the profile inspector, type “mass” in the “Profiles:” menu (upper left) and select Mass Effect. 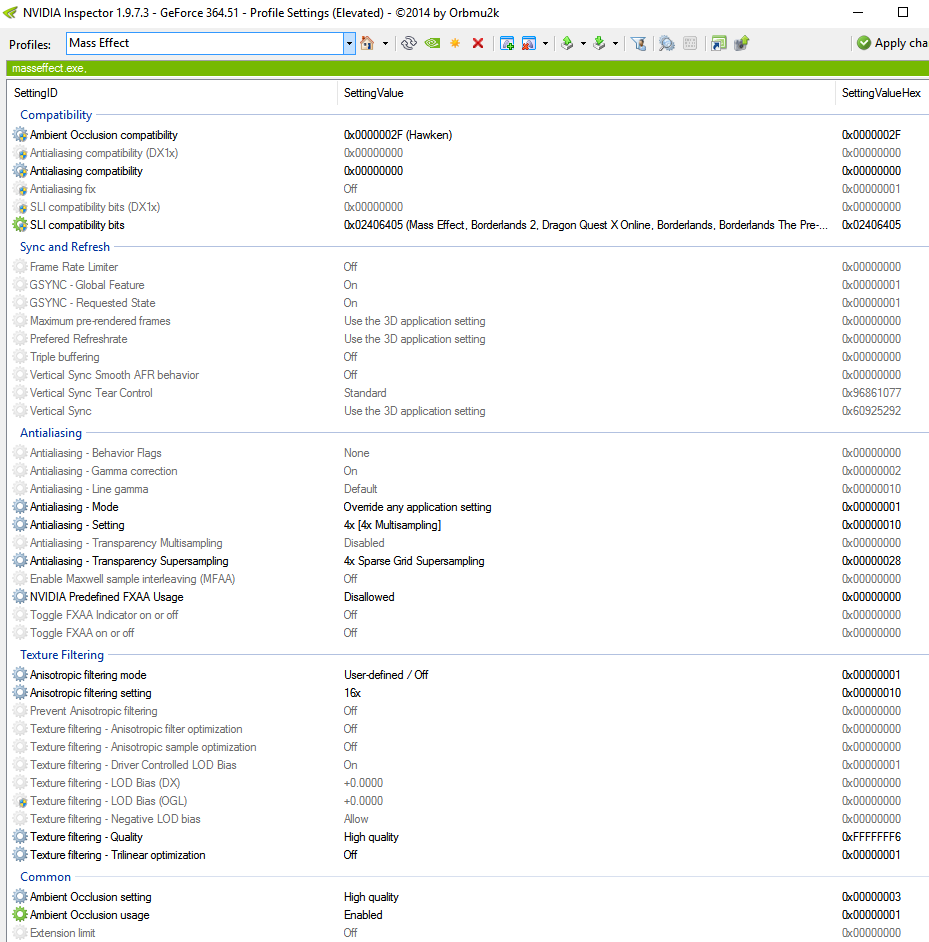 There are multiple possibilities to do anti-aliasing in our stack :

Here we’re doing the Nvidia drivers thing. This means that you can turn off anti-aliasing in Mass Effect, and do not need SMAA injection in ReShade.

In the same vein you can set the aniso to “Point” in the Mass Effect menus, since the Nvidia drivers are handling that. And you don’t need a ReShade-based ambient occlusion shader.

I have seen old (like, early 2010s) reports of Mass Effect running into issues with Nvidia drivers anti-aliasing. I’d never experienced this and this has presumably been fixed since. But if you do get the issue, SMAA via ReShade is a good alternative.

If the FPS isn’t that great, you may need to lower the antialising to 2x Multisampling / 2x Supersampling (the two multipliers must always match).

The .ini files and the game saves

A lot of software uses .ini files. This is where you write preferences that the program reads when it initiates (when it starts). Hence the name.

There’s a long tradition of messing with these ill-documented parameters to change and improve video games. In many cases, results are readily noticeable.

ME1 stores its .ini files as user documents. So the location is C:\Users\(user name goes there)\Documents\Bioware\Mass Effect\Configs — assuming that Windows lives on the C: drive.

Monkeying with ME1 inis

MEIUTM/ALOT already comes with many BIOEngine.ini edits. These handle a lot of fiddly but visible changes.

To go further, the handiest resource is ArJed’s mod on the Nexus  . Pick the MEUITM-compatible version. It is extensively documented – read the ReadMe.

Note that many of the proposed changes are resources-hungry. For instance, the game’ll keep drawing full polys for distant objects. The readme explains what are the most resources-hungry ones, so you can tone them down if the game is running too slow.

(Doing *everything* — textures, driver forcing, full-on .ini changes, etc. — will likely result in observable slowdown unless you’re on a GeForce 2080 or somesuch. Again, if you change the .ini to even more aggressive settings than MEUITM and ALOT, do read the manual.)

Make *backups* of your modified .ini files once you’re finished. They are weird cases where the game reverts them for… reasons. And redoing everything is a pain.

Likewise, if you ever uninstall and reinstall Mass Effect, the saves in C:\Users\(user name goes there)\Documents\Bioware\Mass Effect\Save will likely get deleted. BACK THEM UP !

Furthermore, the game has a certain enthusiasm about overwriting config files. Setting bioengine and bioinput to read-only (right click on the config file to edit its properties) may be necessary if that keeps happening.

Reshade  is a set of graphics tweaking tools, mostly for games. It injects stuff that manipulates pictures (“shaders”) between the game’s engine and your monitor.

Installing ReShade is NOT necessary in this setup. Or even important.

Like most tools so far, ReShade has been extensively idiot-proofed.

So, \steamapps\common\Mass Effect\Binaries now has extra resources such as a d3d9.dll, a folder with ReShade shaders, and a ReShade.ini file. And when you start Mass Effect, you’ll see some text in the upper left corner saying that ReShade is on and how to open its menu.

ReShade is quite flexible. When in Mass Effect, you can always hit “Home” and switch on and off every single effect to see how it impacts the game’s look.

If you like this stuff, the Nexus mods page for Mass Effect has a number of other ReShade presets you can explore. Some are crispers, some are bloomy, some are subdued, some are vivid…

To keep it simple, I’d suggest the methods above :

If you *really* like this stuff, you can also experiment with ReShade while in-game, changing the parameters for the effect to be more to your liking.

People with a widescreen display

*If* you use a ultrawide screen, install :

Otherwise, a bunch of buttons and menus will be pushed off-screen. This is a common issue with older games and ultrawide displays.

All the instructions are on the mod’s page.

Do note that this means that you need to launch Flawless Widescreen, *then* Mass Effect.

I’m doing screenshots for writeups.org, which implies modifications. But I doubt most people care about these.

The general idea is to add keybinds to turn the flying camera on/off, to hide the scaleforms (that’s the user interface), and to take tiledshots. This mod  has some discussion of this.

Over the course of this guide we’ve been through a lot of very well-made resources that are completely free.

Most are the product of thousands of hours from volunteers who code tools, parse data files, paint textures (and normals and whatnots), study game engines and their parameters, understand arcane stuff such as rasterized light spaces or shaders injection, etc..

So when interacting with mods and tool authors donate if you can, and don’t be a jerk.