A typical albeit very powerful brick  in most respects. But Massacre had a special ability that set him apart. He could “read” other people (in DC Heroes RPG terms, Detect), predicting what they were about to do (allowing use of Precognition and his Powered Skills). Superman speculated that Massacre was reading nerve impulses, though this was not directly confirmed.

Whatever the mechanism, Massacre could only discern what physical actions they were about to take. He could not sense their actual intentions, read their thoughts, or necessarily predict what exact effect they were attempting to accomplish.

For example, Massacre could sense that Superman was about to fire a blast of heat vision and even determine the direction of the blast quickly enough to raise his shields or duck out of the path of the beams. But he could not predict that Superman would use a trick shot with his heat vision to hit him from behind.

By transforming himself into energy, Massacre was able to fly quickly enough to travel across interstellar distances in short periods of time. Massacre was intangible in his energy form and thus effectively invulnerable to most forms of physical attack, though he was in turn incapable of affecting physical objects in this state.

Massacre’s origins are unrevealed. He made a name for himself throughout the galaxy by traveling from place to place among the stars, engaging pretty much everyone he encountered. Warriors were slaughtered as a test of Massacre’s abilities, innocents were slaughtered for the sheer joy of it.

Massacre was followed by a skimmer, a salvage gatherer who picked up items from the wreckage left behind by Massacre’s battles. The skimmer sold the items he acquired for profit, which he shared with Massacre.

The Earth hero Auron encountered Massacre just after the cosmic thug had killed the entire crew of a Virago cruiser near the stellar formation known as the Dog-Star Clusters. Outraged by this pointless attack, Auron fought Massacre.

Massacre found Auron more challenging than any of his previous opponents, since he could not read Auron. Nevertheless, Massacre’s superior strength and durability allowed him to prevail over Auron.

The badly beaten Auron was found by Superman, who was lost in deep space at the time. The two of them teamed up and tracked Massacre down at the site of yet another slaughter. In the ensuing battle, Massacre killed Auron and pledged to battle Superman again in the hero’s “natural habitat” — Earth — before flying away.

Months later, Massacre learned the location of Earth and flew there. His skimmer followed dutifully behind him. Massacre flew from place to place across the world, interrogating innocent people regarding Superman’s whereabouts and then killing them. He quickly zeroed in on Metropolis and renewed his battle with the Man of Steel. 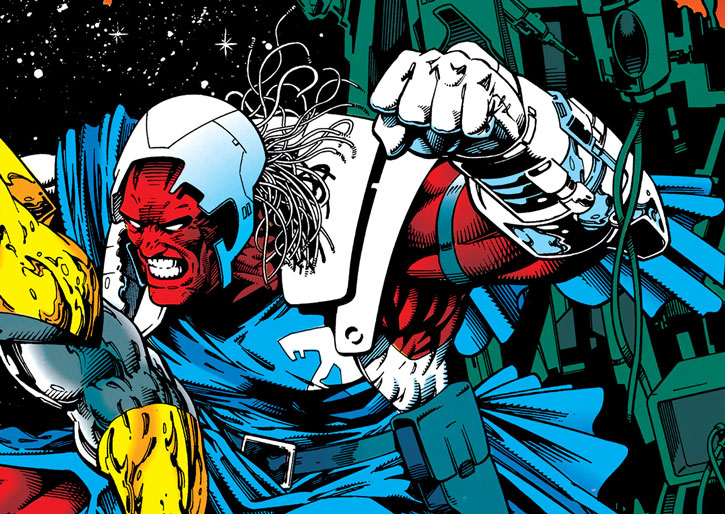 To his friends’ horror, Superman was again badly outmatched by Massacre. The killer struck Superman time and again with impunity while easily avoiding his opponent’s attacks. Once Superman realized the nature and limitations of Massacre’s abilities, he was able to quickly turn the tables on the brute, battering him unconscious.

Massacre regained consciousness in a few moments, only to discover his skimmer had been fatally injured by the collateral damage of his battle with Superman. Massacre agreed to end the battle in exchange for being allowed to take the skimmer away to a xeno-med unit that could heal his injuries. After flying away, Massacre simply ditched the skimmer’s body in space.

His motive apparently had more to do with not wanting his property — the skimmer — to die in an enemy’s possession. Massacre also delighted in the idea that his skimmer’s death would make his next battle with Superman more personal.

Superman and Massacre next met when they were both imprisoned by the Tribunal, a group of cosmic law enforcers. Superman was being tried for the deaths of his race because it was an ancestor of his, Kem-L, who had created the genetic affliction that prevented other Kryptonians from leaving their homeworld. The Tribunal considered descendants responsible for their precedents’ acts.

Massacre was being held for the many murders he’d committed in his acts of violence.

Massacre took the opportunity to attack Superman, but their bonds negated their powers, so neither combatant was able to get the advantage before the guards broke up the fight. Shortly thereafter, the Tribunal sentenced Massacre to death. They allowed a large group of the friends and families of Massacre’s victims to mob the helplessly restrained villain.

Though Massacre was seemingly a lifeless corpse in the wake of that attack, he appeared again sometime later as a servant of Maxima as her army moved through Earth’s solar system. Green Lantern and Superman intercepted the group fearing they were an invasion force.

Maxima’s forces were in fact fleeing Imperiex. But impatience, stubbornness, and misunderstanding resulted in a fight between them and the two heroes. Superman asked Maxima how Massacre had survived during the battle. Maxima tauntingly responded by noting that she had once attended Superman’s funeral yet he was also alive and well.

Massacre returned at Maxima’s side when an alien Alliance came to Earth to make a stand against Imperiex there. Though the Alliance itself provided valuable aid to Earth’s heroes in finally overcoming Imperiex, Massacre himself did not make a significant individual contribution.

Massacre is a large, well-muscled, crimson-skinned male humanoid. His “hair” consists of shoulder-length locks of thick, rough-textured, gray cords growing out of his head over the same area that hair grows over the cranium of a human being; whether these cords are individual growths or braids of smaller hair filaments is difficult to determine.

His teeth look like that of a human being as well, except for slightly enlarged canines.

In his early career, Massacre wore heavy black knee-high boots, a blue toga with silver shoulder pads, a silver helm that left his face exposed, and silver bracers with blaster attached to them. His hair flowed out loosely from underneath his helm.

In more recent encounters, after he entered Maxima’s service, Massacre’s boots were silver and he eschewed the toga for black pants with a silver belt and a gray metal harness on his upper torso, though he retained the blaster bracers. In this garb, Massacre wore his hair in a queue.

A brute with a love for violence, Massacre seeks out any opportunity for a good fight. He takes jobs primarily for the resulting opportunities to engage in mayhem, with concerns for money being a distant second. Massacre valued the skimmer that worked with him, but only as one might appreciate a useful pet. Massacre took a particular delight in battling challenging opponents.

When he was captured by the Tribunal and about to be killed by his victims’ relatives, his courage faltered when he realized he was going to die while bound and unable to fight back.

When Massacre reappeared in Maxima’s service, he still showed a delight in battle and engaged in his usual braggadocio. But his primary motivation was protecting and serving Maxima.

It is possible that Maxima contributed to Massacre’s survival of the Tribunal’s death sentence and Massacre’s subsequent service is rooted in a sense of obligation. Massacre would undoubtedly have respected Maxima’s martial nature as well.

Massacre speaks in a semi-formal manner and even sounds somewhat polite when he is not mocking an opponent.

Massacre: “By the blood, that’s a well-earned kill ! I’ve fought stronger, but never anyone so unreadable ! Yes — you were a worthy foe, alien !”
Auron: “Am… a worthy foe …still…”
Massacre: “No, alien — I must insist on past tense !” (Dispatches Auron with a final kick)

“Giving up ? That isn’t like you, Man of Steel ! Or are you trying to figure out how I always stay one step ahead of you ? Come one, Superman — Make a move ! Try to surprise me !”

“My mistress demands free passage. You must not delay her.”

(Facing Green Lantern) “You are hardly worth the effort. I’ve fought the strongest men in the galaxy !”

Massacring the rules: How Massacre’s Powers work together

At the beginning of each combat Phase, Massacre activates his Detect Power.

If Detect is successful, Massacre can choose to use his Precognition during the Declare Actions step of the phase, as noted above in Bonuses and Limitations.

This does constitute a Dice Action, so if he does use Precognition, this only leaves Massacre with a single Automatic Action left for the phase. He usually uses it for a defensive measure such as raising his Force Shield or moving away from an opponent with Flight.

Due to the fact that Precognition counts as Massacre’s Dice Action for the phase, he seldom uses it. Instead, he typically relies Detect in conjunction with the Powered Skills described below (which require Detect to be used successfully) when battling his opponents.

Massacre did not have his Connection to Maxima, or his rocket-boots, prior to entering her service.

This write-up assumes Superman only has a Dex of 10 and rarely substitutes Superspeed for Dex. If using Superman’s official Mayfair stats, increase each of Massacre’s Powered Skills by 5 APs. 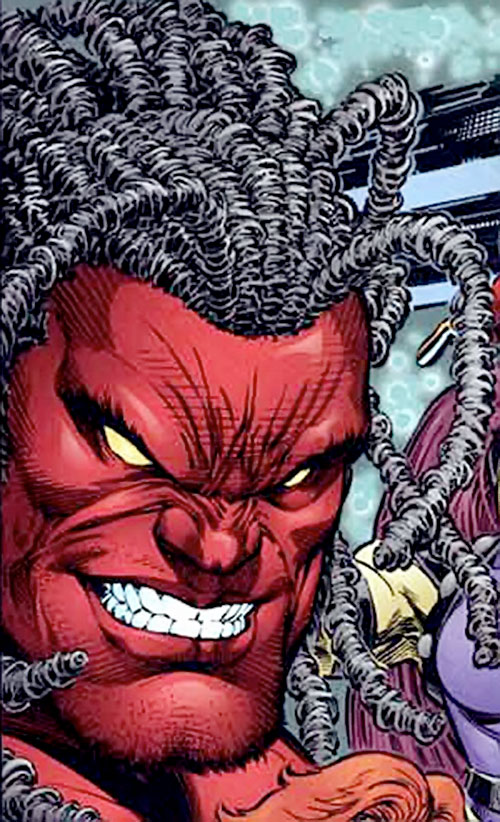 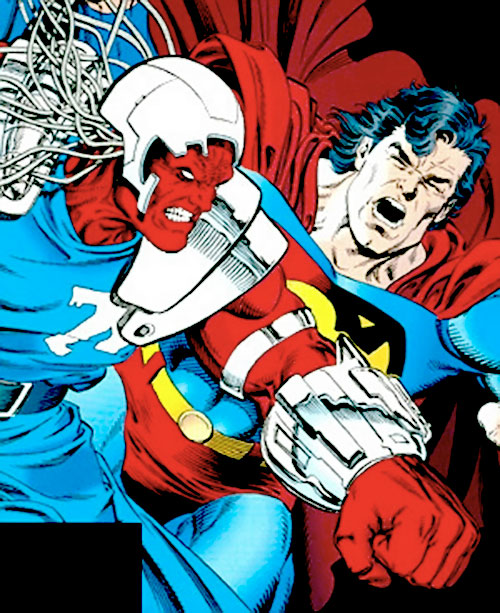 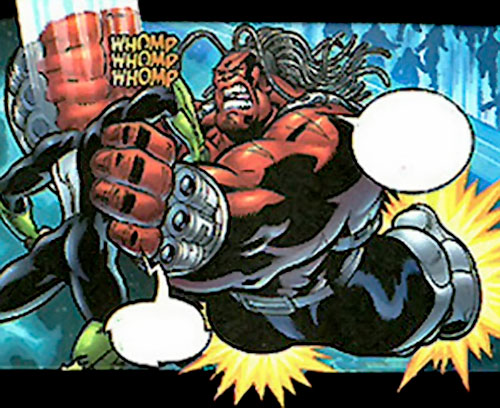