The Master Jailer is the greatest prison designer and one of the greatest escape artists of the 20th Century. Unfortunately, the events which shaped him into such an individual have also made him a formidable opponent of Superman, and his jails and traps are powerful enough to trap even the Man of Steel.

As he has no powers and rarely uses devices to enhance his own capacities, the Master Jailer rarely confronts his foes directly. He prefers to surprise and ensnare his victim in a trap with all of the prisoner’s limitations, vulnerabilities or apparent lack of skills in mind.

Draper will use advanced weaponry if necessary, but he will not indulge in extended firefights. The Master Jailer’s traps are always intricate, but they are not fool-proof. His prisoners have yet to circumvent him, but they usually take advantage of some surprise element of which Draper is unaware.

Carl “Moosie” Draper was a pudgy, somewhat homely child. He was a peer of Clark Kent at Smallville High.

Although Carl was not too bright, he had a knack for designing and figuring out traps. He also suffered from a crush on Lana Lang. When Carl and Lana’s class was caught in a cave-in during a school outing, he found a way out and returned to the group, only to be upstaged when Superboy saved the class.

Still crazy about Lana, Draper followed her career after she graduated. He also undertook a regimen of physical exercise, plastic surgery, and study in order to, in his words, escape the prison that Nature made of his body.

He became a master architect and locksmith. Time and again he tried to prove himself superior to Superman and to win the attention of Lana Lang. He believed that by designing a prison to permanently hold Superman’s archfoes, he would earn Lana’s affection.

Draper was upstaged again when Superman stationed the prison 20,000 feet in the air with anti-gravity mechanisms and sealed it with an impenetrable dome. To revenge himself, Draper created the identity of the Master Jailer. Kidnapping Lana, he captured and trapped Superman in the supposedly inescapable “Eternity Trap”.

Yet no prison, even his own, could hold Draper. Since his escape, he has hired himself out to a group that wanted Supergirl out of the way, but she managed to escape two of his traps. He has also resorted to robbery to finance his traps, which he views as not only functional but artistic.

Carl Draper aka the Master Jailer was in great physical shape.

As the Master Jailer he wore a full-body costume concealing his identity. The costume is grey and white in color; metal bands around the lower legs, lower arms and the forehead, a pair of keys dangling from a belt and a central piece that looks like a prison door.

Draper is, in some ways, the typical Superman foe. He is a man with no natural powers, but he has scientific skills and a motif. He also suffers from mental problems.

Draper’s psyche still bears the scars of his childhood. His love of Lana Lang seems to have been transferred to expressing artistry through his traps. Thus, he has made no further romantic overtures, although he still will involve her in all his plans to impress her.

Lana is a sore point of his, and he’s likely to react violently if she is mentioned. His hatred is not aimed at society per se, but at heroes like Superman who upstage him as he was upstaged by Superboy as a child.

Draper is very proud of his accomplishments. He will boast about his great creations, but only while being in the Master Jailer guise. Draper is an intelligent man and a genius inventor. Unfortunately, he is driven by a need to assert himself, and although not really evil, he will not care if people die as he performs his “exhibitions”.

He feels that he could easily be a new Houdini  or with the Nobel Prize with his inventions. He’s probably right, but we’ll probably never find out.

He is very bitter about having had his triumphs overshadowed by other happenstances and the more noticeable actions of superheroes. The Master Jailer is likely to show up when Superman is around, or to prove his genius by jailing a known super villain. He will prove his intellect at every opportunity by trickery, boasts and engineering feats.

As such, he could have many roles in a game. Good or bad, and his lack of morals would eventually show up.

“By tapping the stored energy in the power-packs I’ve harnessed Metallo’s Kryptonite-radiation, the Skull’s electrical energy and the Parasite’s power-siphoning ability ! And I’ve used a combination of all three power to make Superman the prisoner of — the Master Jailer !”

“You are now deep inside Mount Olympus, Superman — and you are my prisoner — in the most ingenious prison ever devised !”

“Who is the greater champion of justice ? The more formidable crusader ? Who is more deserving of your respect, eh ? That Super-Cheat… or the only man who’s every truly outsmarted him ? Me — the Master Jailer!” 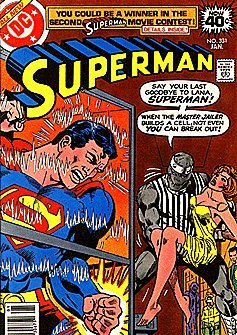 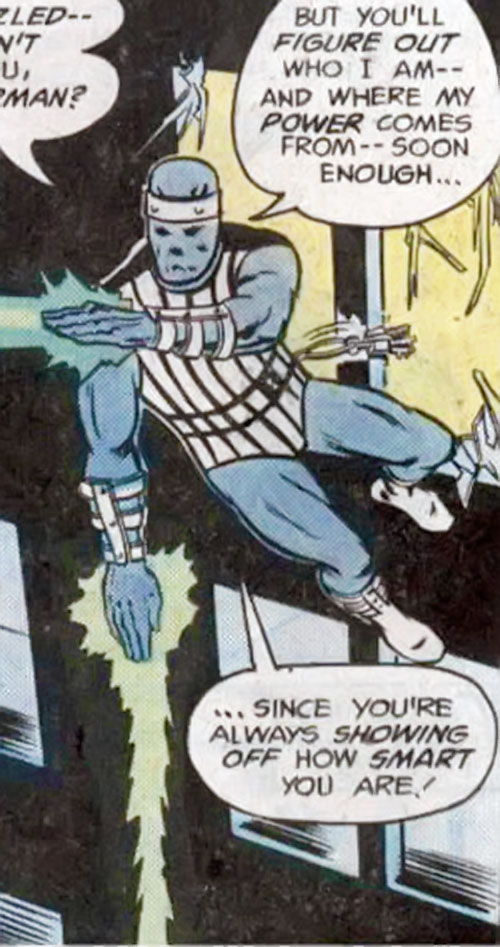 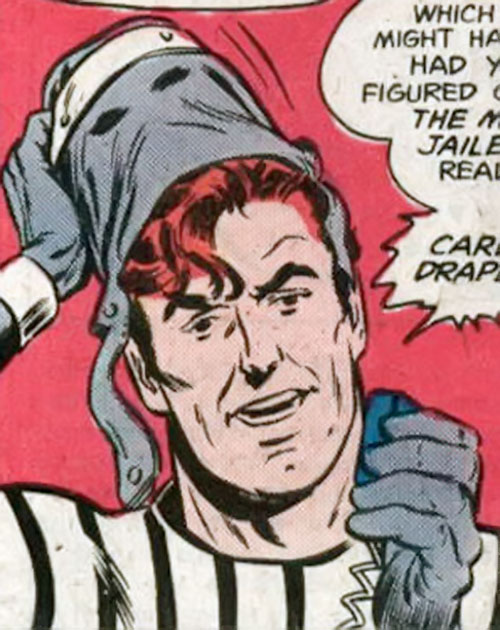