“Known to the world as Earl Everett, society playboy, he is known to the Naval Intelligence Department as Excello, because with his mental wizardry and remarkable physical feats he excels all others in solving plots against the U.S. government.”

Master Mind (two words) Excello was an obscure Golden Age  character. He appeared twice in 1940s in comics by Timely, the ancestor of Marvel Comics.

Then he was essentially forgotten. Until Greg Pak  brought him back as part of Amadeus Cho’s origin sequence.

This profile only covers the 1940 vintage material.

For unrevealed reasons, Excello has astounding physical power. His brawling ability is amazing and his strength is superhuman. The latter allows him to :

He also demonstrated incredible agility. Excello once leapt on the back of a passing speeding car without the passengers noticing it, and once leapt from the wing of a low-flying airplane onto a car.

Oddly enough, Excello can easily be knocked out by surprise attacks. The good old truncheon to the head from behind works fine, of course. But even a person suddenly punching without him expecting it is likely to KO the Master Mind.

On a more intellectual level, seems proficient with an incredible array of skills. The master Mind apparently built his secret gadgets (see the game stats for those) himself, can pilot most if not all vehicles, etc.. He seems to be both a chemist and an electrical engineer, through that is presumably but a part of his skills.

The Master Mind’s “mental wizardry” gives him extra-sensory perceptions (ESP), and may explain his physical might. The narration calls “visualisation”. Examples of “visualisation” include :

He also has high-level connections all through the US Navy . Enough to have them unhesitatingly shell whatever he tells them to target over his pocket transmitter.

Master Mind Excello once foiled a nefarious plot against America involving foreign saboteurs placing bombs in key water dams. He then proceeded to stop Russian terrorists from blowing up trains. Those dang foreigners !

Although Mystic Comics promised that Excello, the Master Mind, would unravel another intriguing plot against the government, he never appeared again. Who can you trust ?

The last illustration is Chris Weston’s take for The Twelve, rather than vintage art. So it’s a more modern view of the concept, but still stepped into the 1940s.

He’s very confident. Which makes sense given how he overwhelms the opposition.

“It’s time to act now ! My secret chemical SF44 will burn right through this iron door !”

“But you made one mistake, Marko !” (takes off his disguise) “You see, I am not Kadash ! Your plan can never be carried out !”

“The rats – they’re going to blow up another subway ! I’ve got to work fast !”

“A deep breath will snap these cords.”

He’s an invincible, all-knowing wish fulfillment character. Therefore, I statted with a broad brush and highballed attributes so he can win at everything. 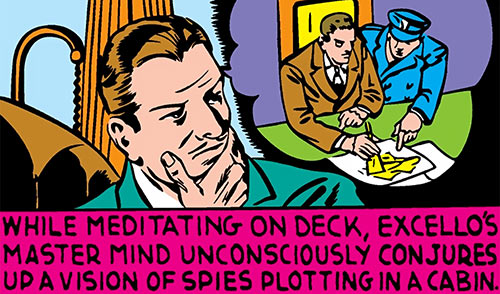 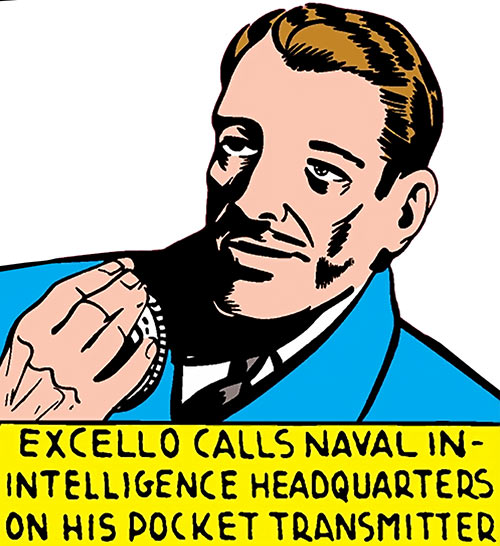 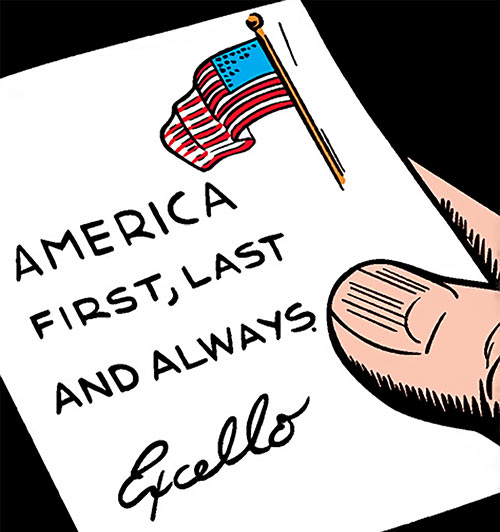 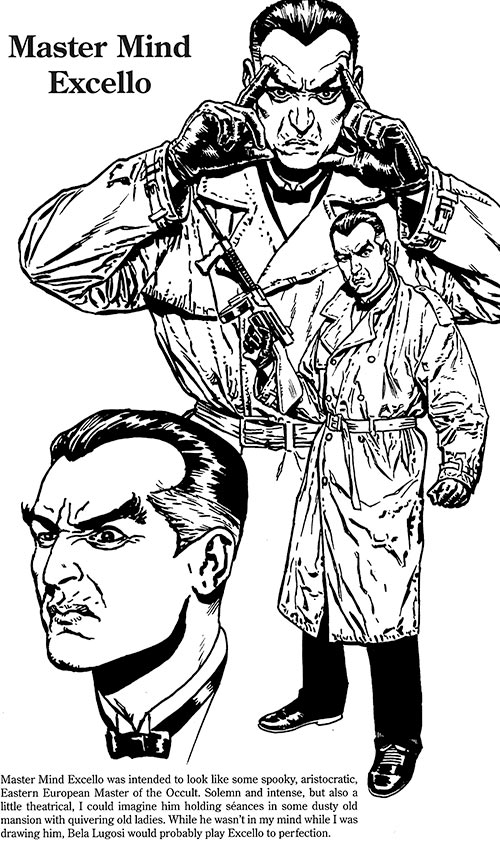