Master Mold possesses all the powers and abilities of the early Sentinel models. As such he can fly, blast with a wide variety of weapons, communicate via radios and even regenerate. Additionally Lang equipped it with the ability to put victims to sleep with high frequency sounds as well as control minds.

Lang’s brain waves give it all of Lang’s scientific knowledge including the ability to create new robots and an expertise in the field of genetics. Dr. Lang was an intelligent man who is now being completely emulated by Master Mold. Master Mold is also both stronger and tougher than any previous Sentinel due to constant upgrades.

A most important and useful ability is the ability to recreate a new body for itself from metal debris once the old body has been destroyed. Lang’s memories and the recreational ability are linked to the Brain Module which is being stored in a much protected area of Master Mold. This means it has serial immortality as long as the Brain Module is functioning.

After Larry Trask, creator of the first Sentinels, was killed, the ownership of the sentinels officially fell under the United States government. Meanwhile, a federal investigation on mutants was being carried out by a Dr. Steven Lang. Lang was a fanatical mutants hater and got hold of Trask’s notes on how to create Sentinels.

Lang managed to get funding from the Hellfire Club under false premises for a project to build Sentinels and a large space station. Lang’s plan was to kill every mutant he came upon. However, the space station and the Sentinels were destroyed in combat with the mutant group the X-Men.

During the battle, Lang was turned into a ’mindless vegetable‘, but his brain engrams had been stored. The engrams were automatically programmed into a creation of Lang called the Master Mold. The Master Mold was a special 30 feet tall Sentinel that Lang had programmed to destroy the 12 most powerful mutants in the world.

The Master Mold believed itself to be the real Lang trapped inside a robotic body. In all instances, it thought and reacted like Lang would have done.

When the space station blew up Master Mold survived and built himself a new space station upon an asteroid. He then captured the Angel and the Iceman and brought them, accidentally together with the Hulk who he had fought earlier, to the new base.

The prisoners escaped. The Hulk began ripping the Master Mold to pieces. Master Mold blew up the space station and himself with it. But before doing so the prisoners successfully escaped back to Earth.

Master Mold’s Brain Module had however survived and landed off the coast of Alaska. There it built itself a new body, in time, from sunken ships.

He then detected the presence of Cyclops, one of the 12, in the vicinity and proceeded to destroy him. Cyclops managed to get Master Mold to fire its energy beams while between some large gas storage tanks. The resulting explosion destroyed Master Mold, but its Brain Module survived.

Next the Master Mold appeared on Muir Island and managed to get mental control over Moira MacTaggert. Mold forced her to create the Retribution Virus which would kill any mutant after taking their powers away.

The X-Men Cyclops and Banshee managed to free Moira from the mental domination. But the virus had already broken loose.

All mutants on the island were infected by the virus. They were soon defeated by Mold’s servant robots and his special assistant the sentinel Conscience. But Master Mold soon found out that the virus had mutated so that it would also kill humans.

He reasoned that, if released onto the Earth, the virus would kill all mutants, yet a small number of humans would survive. Mold planned to watch over these survivors to make sure no mutants were ever born again.

But Conscience, who also had been programmed with Lang’s brain engrams but was emotional, reasoned that it was not right to kill almost all humans just to kill all mutants. It thus destroyed both itself and Master Mold. Moira MacTaggert then managed to produce a cure for the virus. Thus, Cyclops and Banshee were cured from all effects.

Master Mold is similar in appearance to most Sentinel models, particularly the earlier models. It is a very huge robot equipped with the standard sentinel weapons and some upgrading of its own.

Its reconstructed limbs appear humanoid in structure but look far more primitive in built than the standard sentinels limbs. The head, however, strongly resembles that of a standard sentinel unit.

The fingers and other appendages, for example, look like giant lifting cranes and the feet appear to be giant pistons. Its entire body simply looks like it was put together from very big parts from other machinery, which it actually is. Its body language is naturally very mechanical and it might very easily be mistaken for a giant non-standard sentinel.

Its coloring is entirely in blank metallic tones.

Master Mold is a mixture of the personality of Dr. Steven Lang and as programmed. Lang was a fanatical mutant hater and would go very far to kill them all. His programming, which tells it to destroy all mutants, overrides any programmed human regrets rendering it a completely dedicated engine of destruction.

Thus, Master Mold would go to any length to kill all mutants in the world, even kill most humans if it would help his cause. Mold is, after Lang, a very cunning robot capable of tactics and the creation of new robots.

It is, however, completely unable to realize that it is only programmed with Lang’s brain engrams. It thus believes itself to be the real Lang trapped within a robotic body. It usually stresses that it is really Dr. Steven Lang to any adversary that wonders who it is.

Master Mold also has a list of primary targets; this lists consists of the 12 most powerful mutants in the world and having to choose targets these would always be his preferred targets. Cyclops is one of the acknowledged on that list.

Clearly the mixture of human mind within a powerful robotic body is a dangerous combination. The sense of entrapment in this body increases its fanatical hatred for mutants to really unhealthy levels and it will continue as long as it possibly can with its agenda.

Master Mold is a very powerful mutant hunting robot. As such it has no real place in the DC Universe where mutants are very rare. If it were to be programmed to hunt down any metahuman it could be useable in a hero campaign. The creator of Master Mold could still be Dr. Steven Lang, working for one of the different DC agendas dedicated to studies/control of metahuman activity.

Lang would probably work well as a scientist at the ’Institute for Metahuman Studies’. The original Sentinels might have been a plan by a paranoid government to be used in case the metahuman population ever went renegade.

Equipment:
Brain Module of Resurrection [BODY 20, Recall: 08, Regeneration: 08, Lightning: 09, Boni: Hardened Defenses, Miniaturization, Regeneration power is able to create a new body, with the previous attributes, powers and skills, when the old body has been completely destroyed, giving it serial immortality, although this effect takes months to accomplish, Limitations: Lightning has a Range of Touch only, Regeneration Power requires metal in close vicinity to function properly, Note: This object is kept inside the head of Master Mold and will activate only whenever its physical body is completely destroyed to bring it back to function again; once active it will strike back at anyone touching it by its lightning field]. 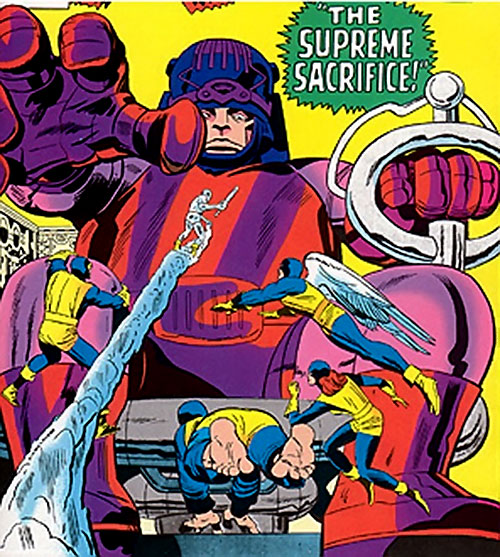