The Master is a formidable terrorist mastermind. He built a fearsome international network. He could orchestrate such complicated operations as the Marvel universe equivalent of the 09/11/01 attacks. Or dropping of cluster bombs three hundred miles within American airspace, followed by the military takeover of the small town.

He has enough resources to outfit and train his men to a degree comparable to an American elite regiment. And to seed advanced technology which was eventually bought by S.H.I.E.L.D.

He is also a top-notch demolition specialist and guerrilla warrior, and a master martial artist. He almost had a fighting chance against Captain America (Steve Rogers) himself. His body seems very resistant to pain due to its medical condition – resistant enough to have Cap doubting of the humanity of the Master.

In some ways, he’s the terrorist equivalent of a lesser Batman or a Punisher.

The man who would become the Master was born in an unknown part of the world during the Cold War, the son of a impoverished peasant couple. Although his parents had little interest toward politics or comprehension of the deadly conflict raging across the planet, they were suspected of having ties with Communists.

One day pro-West paramilitaries paid with American money and using American guns came to their home. They put it to the torch and shot both adults. Their son was very badly burned, but managed to survive.

There is of course no way to tell where the Master is from. Similar scenes happened thousands of time throughout the world, and the Master is too badly burned to determine even his skin colour. He rven morbidly challenged Captain America to deduct the country he was from, to have him acknowledge the consequences of the war against the “Empire of Evil”.

Ashes of the Cold War

The Master of the Assassins dedicated his live to destroying the United States, apparently with a weakness for poetic justice. As his organization is the direct equivalent of Al Qaeda, we can assume analogs for operations by this network in the real world were conducted in the Marvel Universe.

He also built his organization to closely resemble the historical Assassins – a particularly efficient and feared ancient terrorist organization.

Like his historical predecessor, the Old Man in the Mountain, he called his central headquarter Alamut. He also made his men forget any fear from death. But it was not done via hashish and lies about the Muslim Paradise. He instead gave them electronic dog tags, which he said would give them serial immortality. But only the Master’s tag did that.

The Master of Assassins burst on the world scene on 09/11/01. Hijacked passenger airplanes crashed into the World Trade Center and the Pentagon, with the same consequences as in the real world.

Days later, another daring operation took place. Terrorist leader Faycal al Tariq and a group of Assassins airdropped tripwire-triggered cluster bombs over the small American town of Centerville. They then took military control of the city – whose main job provider was a bomb-making plant.

Faycal al Tariq had a TV crew broadcast his only demand. To have Captain America come to him before he would trigger the network of explosives and blast the town, further increasing an already significant body count.

As al Tariq exposed the reasons for his act of bloodthirsty terror, Captain America led a one-man invasion of Centerville. He ran flawlessly through the tight minefield that covered the streets and took out nests of Assassins trying to kill him.

With but seconds to spare, Cap burst into the church where most of the hostages were held (it was a Sunday morning). He knocked the detonator out of Faycal al Tariq’s hand, preventing the carnage.

Al Tariq dropped dead in front of a live camera crew on world TV, apparently from Cap’s last desperate blow. Cap would later the death had been cause by the well-timed use of the assassin’s electronic dog tag.

With al Tariq’s blood on his hands, Cap then publicly unmasked. He told the world it was not America who had killed the terrorist leader but one man – Steve Rogers. He stated that the consequences for that failure were to befall on one man, not the entire nation for which he fought.

Cap went in semi-retirement for several months after 09/11/01 and Centerville. He refused to join S.H.I.E.L.D. troops in Afghanistan. On the next fourth of July, however, he was ambushed and attacked by a heavily-armed group of Assassins.

Although they failed, Cap came to understand the role played by their electronic dog tags. He immediately traced their manufacturer in Germany. In doing so, he unknowingly bypassed a web of deceitful clues the Master of Assassins had weaved to keep Cap chasing shadows.

The Master had chosen the exact city where the company was headquartered with care, too – Dresden . Cap set foot there with a heavy heart.

The company H.Q. had been wired with explosives by the Master himself. But Cap narrowly survived the explosion and collapsing building. When the Master came to confirm his kill, he and Cap fought for a while, with Cap eventually gaining the upper hand as a German SWAT team arrived.

He was too busily angrily denying his opponent’s jab at America’s history to notice the “SWAT team” was wearing the signature electronic dog tags. He was knocked out by surprise by the Assassins.

When Cap came back to consciousness, the Master dismissed his men for a mano-a-mano rematch with Cap. Captain America also won this fight. But given the Master’s serial invulnerability and ability to commit suicide with his dog tags, it is unlikely he was captured.

The Master is terribly burned – his whole head and an unknown percentage of his body, giving him a barely human appearance.

Since his tags can transfer his consciousness, he presumably has clones, including undamaged ones. But the reasons for “wearing” a body as badly burned as his original while fighting Cap are obvious.

The Master is a brilliant strategist. He has built a fearsome power base, and manoeuvres it like a master chess player.

He, of course, consider Captain America to be his greatest nemesis, and desired to confront him in single physical and ideological combat.

He wanted both to clobber Cap and make him admit the terrible evils perpetrated by the US thorough the world through the decades. The Master obviously consider himself the avenger of those dead, rather than being fixated on the destruction of the US for ideological or religious reasons.

The Master is a calm, controlled man with a low-key sarcastic wit. Yet he seems a bit too confident and too possessed by his mission.

“What’s wrong, American ? You *were* expecting a monster, weren’t you ?”

“I thought you were a master strategist… You should ask yourself – what made me what I am ?”

Drawbacks:
Strange Appearance, MIA toward the destruction of the US.

The Assassins are trained on the level of good, experienced shock troops or SWAT team. They have a military discipline, use military tactics and are fully equipped. They are also totally loyal to their master, and are convinced that upon death, their electronic dog tags will transfer their consciousness to another body.

Although Captain America was too much for them to handle, they could actually be a deadly threat for a lesser hero. 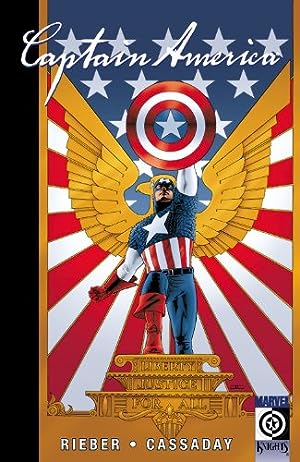 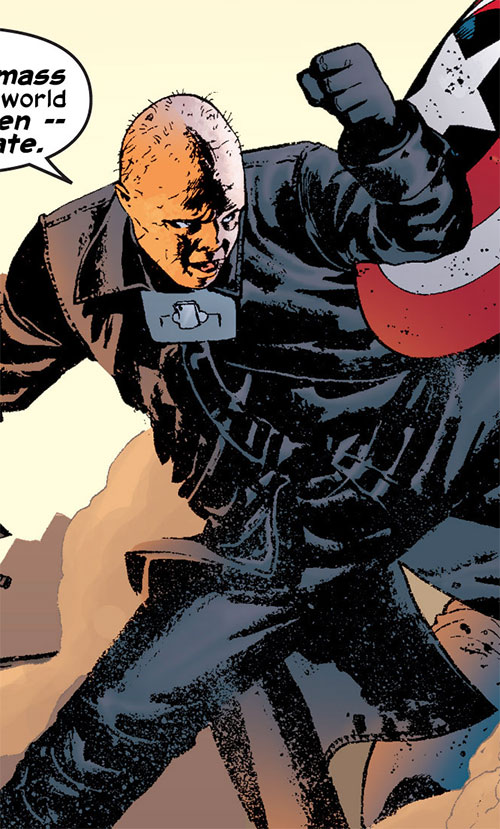