The Master appeared in an early, 1993 story arc in Freex. Freex was one of the early books of the Ultraverse super-hero line launch, but it is presumably pretty obscure nowadays.

Howbeit the Master of the Hunt has an archetypal quality, drawing from Wild Hunt aesthetics. He could thus be used in quite a few settings with little or no change.

The Master of the Hunt and the Bloodhounds are product of genetic engineering. The Master can rip steel with his fingers and has superior agility and speed. He also mentioned having heightened senses, but this remained undemonstrated.

It looks like the Master has spend some time hunting ultras. He has clear experience in fighting them. He also knows other players in that competitive field, like the Dark Angel.

He said that to create his Bloodhound followers, Biotex “combined man and dog and technology […] with heightened senses and iron limbs ! Steel jaws and acid teeth !”.

16 years ago, a new virus was discovered. An artificial virus called Wetware. A cell-sized machine that replicated itself and transformed the infected body. These wetware cells were able to turn humans into ultras.

Nobody knew where wetware came from, but everybody wanted to control it.

Biotex Labs tried to investigate it, but an insane nurse (later called “Wetware Mary”, to reference the historical Mary Mallon ) stole the culture. She injected dozens of babies before destroying it and disappearing.

Some of the babies developed ultra-powers during adolescence, but the trauma forced them to run away to live in the streets. They eventually met, and formed Freex.

Biotex has had major financial problems in the recent past. Loan sharks ended up sending the Ultra merc Rush to press them for repayment by burning his San Francisco lab.

Biotex eventually came back in the black via Federal funds received to conduct a secret project.

Biotex had an interest in capturing the Freex enhanced youths. This escalated as a former Freex member, Pressure, had worked with Rush during his raid against Biotex.

The game is afoot

By the Master of the Hunt’s own account, he was once almost killed in a fire, but was saved and treated by Biotex. He now works as an enhanced enforcer for the company.

Rush and Pressure escaped the Master’s ambush thanks to the timely arrival of the Freex, who were looking for Pressure. But with the Bloodhounds tracking skills, the Master found the Freex a short while later. 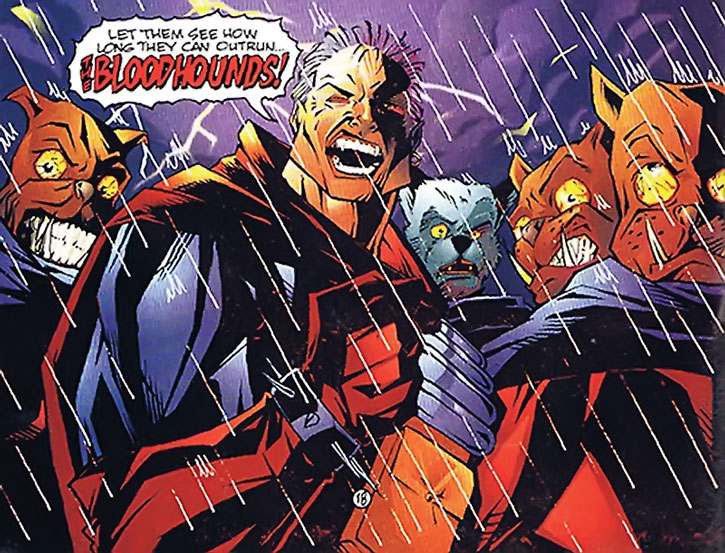 In the ensuing fight the Master contented himself with capturing the empty armor where Plug “essence” has been. Freex mmeber Plug can convert himself into electronic pulses, but has to leave his body in a fluid form behind.

The Master managed to return Plug to the armor. This saved the young man from the psionic  attack of the Death Angel, another Ultras hunter. Meanwhile, the Bloodhounds followed the Freex.

The teens were at the house of the gentle old hippie lady Ruby when the Master of the Hunt attacked. He shot Ruby, severely wounding her. After telling the Freex about the history of wetware, made them an offer : join Biotex or die.

A fight (and a fire) started. The Master and the Bloodhounds had the upper hand over the rookie Freex, until two things happened :

The Freex fled with Ruby before the police arrived.

It must be noted that one of the Bloodhounds didn’t participate in the fight, and probably fled to his Biotex masters.

The Master is a Darwinist thug. He believes this is a world of animals where the big ones eat the small ones. Therefore the only way to survive is serving the biggest, baddest ones. Being normal only makes you a prey.

He is brutal, cruel and mean.

The Master still has some traumas from his origin (a fear of fire). But he is always gloating about not fearing flames, even using them in combat.

Apparently, the Master needs meds to survive and/or deal with pains from his old burns. He always carries a bag with pills, eating them like it was candy. Probably he has some sort of addiction.

The Hounds have a rottweiler’s personality, but apparently form a pack, and feel a mutual loyalty. The Master consider them to be only tools and cannon fodder.

Sweetface: “These people… they can make us not to be freaks, to be normal ?”
Master (sarcasticaly): “Why, of course, dear. They will make you perfectly normal. And they will make you tall and beautiful and cure your acne and put you in a palace with a handsome prince ! Normal gets you eaten, twit ! It’s a world of animals, the big ones eat the little ones !”

“We are tools of the powers who run this world. When we are useful, we are invincible. When we are not, we are dangers.”

The Master is a good villain for the Doom Patrol or the 60s/70s Titans.

Also he could appear hunting the Hybrids, who were created by the rare substance Promethium.

Master of the hunt

Bonuses and Limitations:
Ultra vision needs a Phase to activate.

APs for the sensory Powers, and the Powers themselves, are but educated guesses.

Equipment:
The Hounds use some kind of energy gun, but mostly prefer using their claws. Energy gun [BODY 04, Lightning: 04]. 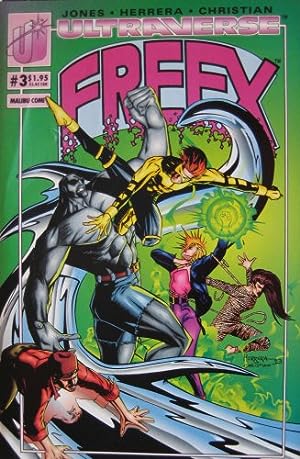 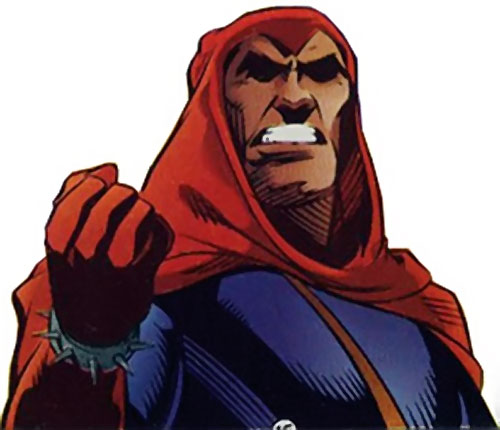 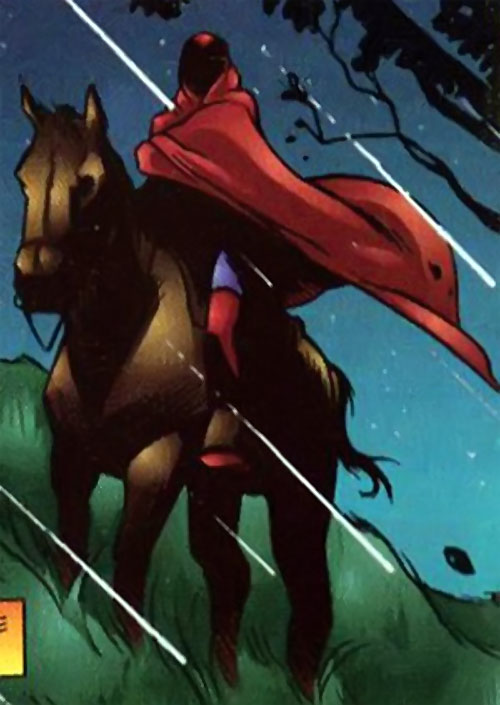