The Masters of Disaster are a mid-to-low power mercenary team in the DC Universe. They are primarily opponents of the Outsiders.

The Masters have a handily generic quality to them, making them easy to use. As well as a clear theme. You’d think they’d appear more as stock opponents, like Marvel’s Wrecking Crew.

Full Name:
The Masters of Disaster.

The Masters of Disaster have nothing against cheap, underhanded tactics (such as taking hostages) and gratuitous destruction and intimidation. But they will only fight for an appropriate pay.

They tend to operate en blocAs a single, homogeneous thing., but only occasionally use genuine teamwork.

Relationship to conventional authorities:
The Masters of Disaster are all wanted criminals.

Bases of operations:
Unrevealed if any.

Former bases of operations:
Unrevealed if any.

Major funding:
Sales of their services. They usually do 50% up front, and 50% on completion.

Back in 1985, the team’s price for a superhuman battle was half a mil – though that’s presumably among the upper range of their prices.

Equipment:
They occasionally use hand-held radios. 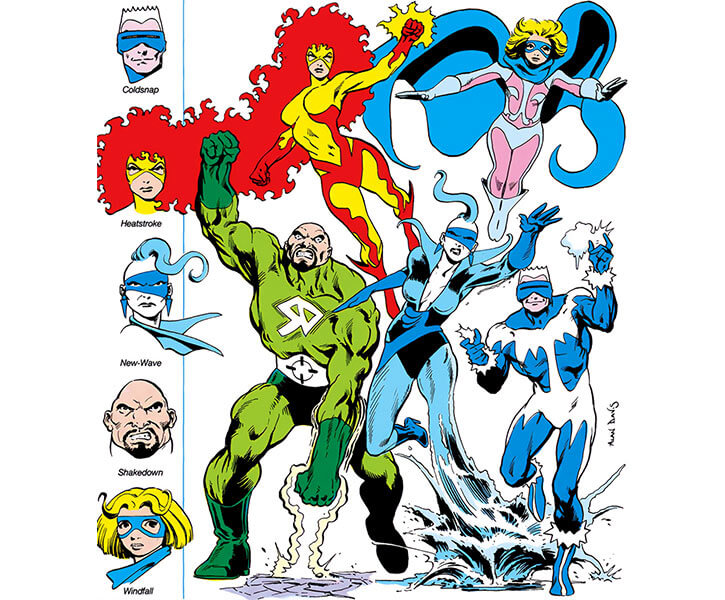 Number of reserve members:
None at this point.

Known officers:
New-Wave (Becky Jones) seems to be doing most of the management, sales and leadership. She likely was the one who recruited the rest.

While her style of management seems to mostly rely on yelling and acting tyrannical, the team is endured into the present day. Their activities have not been continuous though, due to lengthy prison stays and temporary splits.

Membership requirements:
Recruitment by New-Wave. The Masters will normally stick to their theme, where members must have an identity and power that evoke natural disasters such as tidal waves, flooding, earthquakes, tornadoes, fires, landslides, etc. 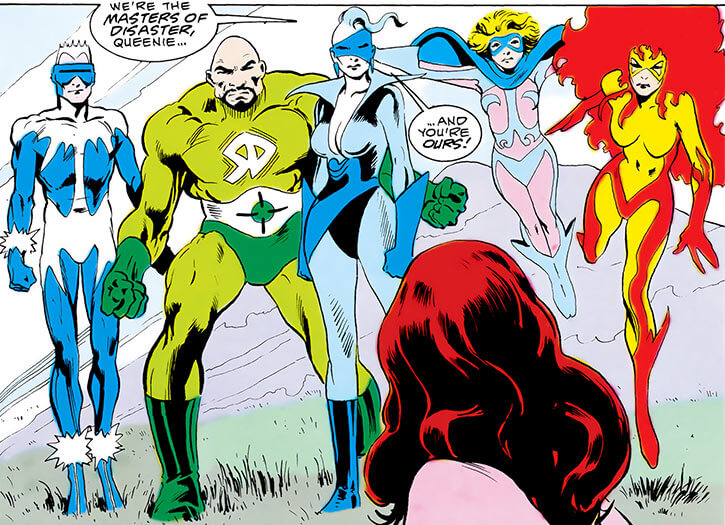 Major campaigns or accomplishments:
They have held their own against the Outsiders from time to time, and they have endured as a team against poor odds and casualties.

(The dates used here are publication dates. See our article about ageing in comics if that’s confusing.)

Hired to kill Black Lightning (Jefferson Pierce). Pierce had recently returned to an active status by joining the Outsiders, leading to a fight between the two teams.

The client was killed when she impulsively took a blast intended for Black Lightning, and the Masters of Disaster then retreated.

During the Crisis on Infinite Earths, they were among the throngs of super-villains teleported aboard Brainiac’s spaceship.

They agreed to join Lex Luthor and Brainiac’s army.

They helped attack Earth-4, and may have participated to other battles off-screen. 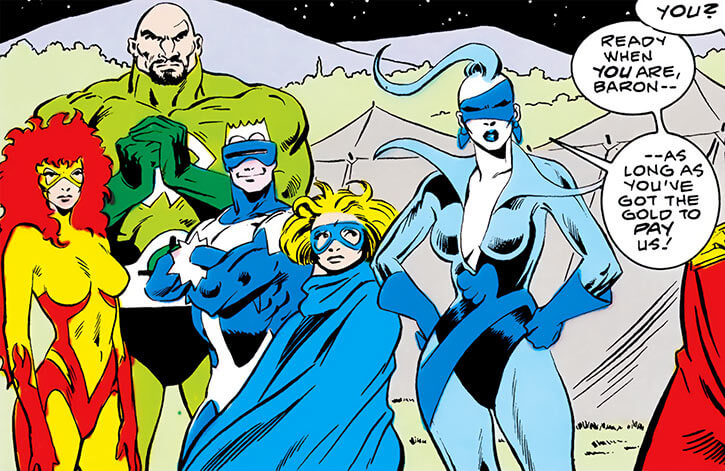 Worked for mad scientist Maxwell Tremayne. They helped him clear part of the remote Mountains of the Moon  to establish his base.

When the Outsiders came after Tremayne, he paid the Masters to fight. When Tremayne was slain by one of his androids, the Masters decamped.

Worked for Baron Bedlam during his 1986 coup and invasion in Markovia. They captured the newlywed Queen of Markovia, helped kill off the Markovian military, and defeated the Outsiders when they came in.

However, the Outsiders were freed by Looker (Lia Brigg), and Windfall temporarily defected to them.

New-Wave opted to stick around when the Outsiders and the Markovian counter-attacked and Bedlam’s allies withdrew their support. Her main goal was to kill Windfall, but Bedlam’s remaining forces and the Masters were routed.

The Masters of Disaster were imprisoned in Markovia. However, Coldsnap and Heatstroke eventually ceased to believe in Markovian promises to cure their condition. They combined their powers to blow up their cell.

New-Wave used a clone of Windfall to infiltrate the Outsiders and betray them. But the Masters’ assault was foiled thanks to Batman’s preparations. During the battle, one of the Windfalls was killed by the other.

By this point, the team was disintegrating. Coldsnap and Heatstroke wanted to walk away, and New-Wave was willing to murder to keep them in. However they had been imprisoned in the Slabs, a prison for super-humans.

They briefly got out of their cells when Mongul escaped, but were apparently beaten down by the guards and didn’t make it out. 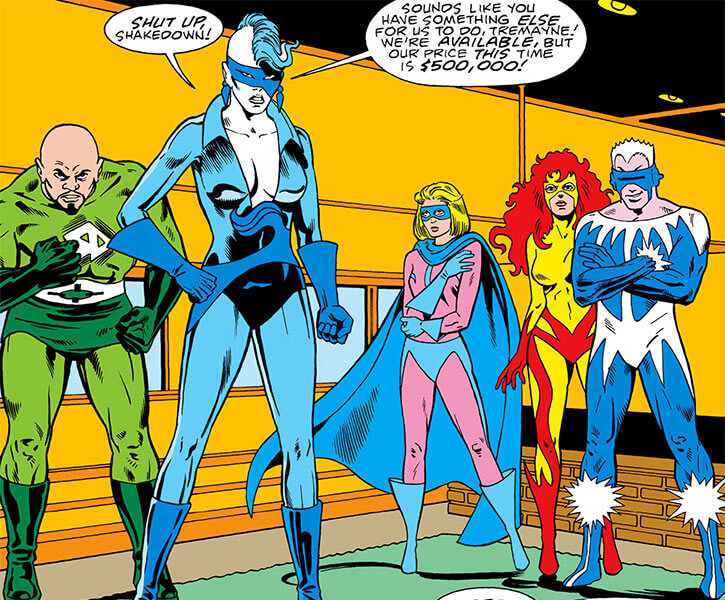 After years of maximum security imprisonment, Heatstroke and Coldsnap realized that the authorities wouldn’t cure them. They reluctantly returned under New-Wave’s leadership. The three of them and Shakedown combined their abilities to burst out of their cells.

However, the then-current team of Outsiders took them down and thus stopped the prison riot.

Part of the team was apparently released, but not New-Wave. Presumably she didn’t benefit from a shortened sentence for good behaviour.

Leaderless, Heatstroke, Coldsnap and Shakedown attempted to rob a bank in Opal City. This was presumably another attempt to pay for research to cure Coldsnap and Heatstroke. However, they were steamrolled by Jake “Bobo” Benetti.

One gets the impression that they went back to prison for several years, but not in the Slabs with New-Wave. Perhaps that was to let them avoid her influence.

New-Wave finally got out of the Slabs when the Joker turned everyone within into green-haired, chalk-white-skinned maniacs. She rampaged in an unspecified city, destroying entire high-rises and killing hundreds while “jokerized”.

Though Circe’s witchery turned responding male super-heroes into animals, Wonder Woman assembled an army of super-heroines. They defeated Circe and her henchwomen.

New-Wave apparently got away, though.

Shakedown was apparently released before the others, and New-Wave tracked him down. They attempted a ransom scheme, but the father of the baby they kidnapped had just gone bankrupt.

Furious, New-Wave murdered Shakedown. But she was captured by Batman and the JSA before she could kill the baby.

Shakedown, Coldsnap and Heatstroke escaped in Metropolis. Why was Shakedown still alive, you ask ? Well, it’s sim… oh ! Look ! Behind you ! A purple penguin !

The escapees beat back the SCU, holding their ground as they knew that Superman (Clark Kent) had been missing. But they were promptly defeated by Mister Majestic. 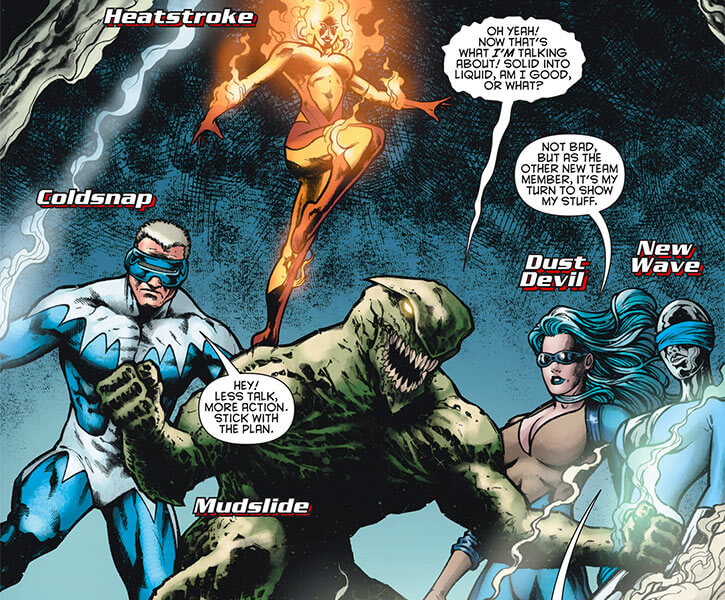 Heatstroke and Coldsnap reupped. They were joined by Mudslide and Dust Devil II, two newcomers. One gets the impression that the team wasn’t formed by New-Wave but that they busted her out of prison to lead them.

The Masters attacked a Markovian research station. The Outsiders responded, but ended up fighting each other due to Geo-Force’s growing madness. This let the Masters of Disaster complete their mission, freeing the imprisoned and greatly altered Geode (Denise Howard) who soon rampaged through Markovia.

A battle with Doomsday weakened Geo-Force’s Outsiders and killed one of them, the Eradicator.

Markovia’s hostile neighbour seized the occasion to attack, and hired the Masters of Disaster to create chaos in the capital and further facilitate their advance.

The Masters ran into the Creeper, who briefly repulsed them. The irascible New-Wave then crashed a tidal wave onto the city.

However, it would seem that the Masters of Disaster then left as events escalated beyond what they were paid to handle.

At this point the DC Universe was altered by the New 52 events. A Masters of Disaster team seems to exist in later continuities. But it seems different and was but barely glimpsed and reality was rebooted again several times anyway.