Matilda is a well-regarded children’s movie, released in 1996. It is based on a book by Roald Dahl . Like many of Dahl’s books, it combines a child-like view of the world with some dark elements.

The titular Matilda is a an astonishingly bright (and psionic ) little girl. Early during the movie she is sent to an evil school, directed by the really mean Trunchbull.

Matilda was played by young Mara Wilson, who became something of a star among geek-ish and progressive circles.

A fun character and a good family movie.

Matilda Wormwood is a natural born genius. Before the age of 3 she could make perfect pancakes, write her name, and read. Matilda can add large numbers in her head and read at a college level even though she is only 6 years old.

Matilda has shown an ability to comprehend complex adult concepts like relationships and judgement of right and wrong, well beyond her years.

It is theorized that Matilda uses more than the usual 10% of her brain , this even allowed her to develop telekenesis . Matilda is still very young and has the potential for becoming a powerful psychic in the future.

Everyone is born ; but not everyone is born the same. Some will grow into butchers, bakers, or candlestick makers. Some will only be good at making jello salad. One way or another though every human being is unique for better or for worse.

Most parents believe their children are the most beautiful creatures ever to grace the planet, others take a less emotional approach. Matilda’s parents didn’t like her at all when she was born.

The Wormwoods were so wrapped up in their own silly lives that they barely noticed they had a daughter. Had they paid any attention to her at all, they’d have realized she was a rather extraordinary child.

By the time she was 2, Matilda had learned what most people learn in their early 30s. How to take care of herself. As time went by, she developed a sense of style.

Every morning, Matilda’s older brother Michael went to school. Her father went to work, selling used cars for unfair prices and her mother took off to play bingo. Matilda was left alone; that was how she liked it. By the time she was 4, Matilda had read every book in the house.

One night, she got up her courage and asked her father for something she desperately wanted, a book. ”There is nothing you can get from a book that you can’t get from a television faster”, he said.

Matilda already knew that she was somewhat different from the rest of her family. She saw that whatever she needed in this world, she’d have to get herself.

The next morning after her parents left, Matilda set off in search of a book. From then on, every morning, as soon as her mother went to bingo, Matilda walked the 10 blocks to the library and devoured one book after another. When she finished all the children’s books she started wandering around in search of something else.

Mrs. Phelps, the librarian, who had been watching her with fascination for the last few weeks offered Matilda some valuable library information. ”Did you know you could have your very own library card? Then you could take books home and you wouldn’t have to walk here everyday. You could take as many as you like”.

So, Matilda’s strong young mind continued to grow; nurtured by all those authors who’d sent their books out into the world. Like ships onto the sea. These books gave Matilda a hopeful and comforting message “you are not alone.”

Sometimes Matilda longed for a friend. Someone like the kind, courageous, people in her books. It occurred to her that like talking dragons and princesses with hair long enough to climb – such people might exist only in story books. But Matilda was about to discover she could be her own friend, that she had a kind of strength she wasn’t even aware of.

Matilda revealed to her family she could add large numbers in her head. Her father got angry at her and told her “When a person is bad, they must be punished.”

Harry Wormwood had unintentionally given his daughter the first practical advice she could use. He meant to say, “When a child is bad…” instead he said “when a person is bad…” and thereby introduced a revolutionary idea that children could punish their parents. Only when they deserved it, of course.

Early the next morning, Matilda crept into her parent’s room and changed her father’s hair oil with peroxide. This changed his hair to blond.

Dirty dealings like buying stolen car parts, never stay secret for long, especially when the FBI gets involved. 2 FBI agents sat up surveillance outside the Wormwood’s home. Harry took his son and Matilda to his work to brag about the way he cheated people to get big money. Matilda called her dad a crook and to punish him put super, super glue in his hat. 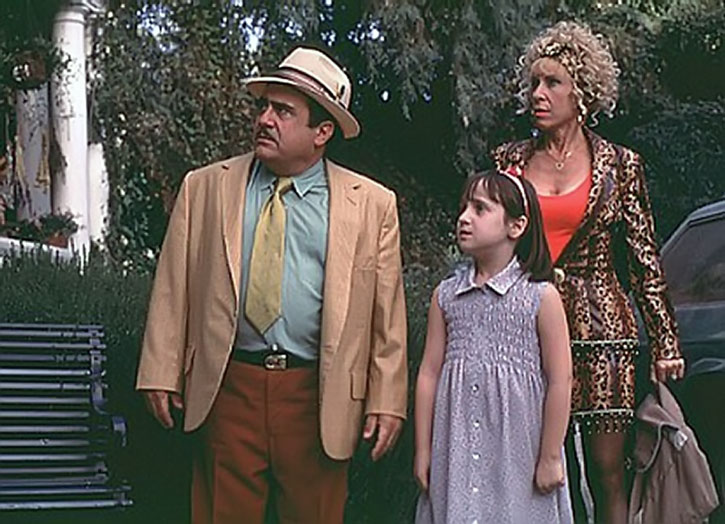 Later that night, Mr. Wormwood forced Matilda to watch a game show with her family. Under the pressure, the TV exploded! Was it magic or coincidence? She didn’t know. It is said that we humans use only a tiny portion of our brain. Matilda might never have discovered her own great strength of mind, were it not for the events that occurred on the very next day.

After selling a car to the principal of Crunchem Hall elementary school, Harry was impressed and sent Matilda to attend the school.

Matilda had always wanted to go to school because she loved to learn. She tried to imagine what her new school would be like. She pictured a lovely building surrounded by trees and flowers and swings. Well, there was a building and children, so regardless of what Crunchem Hall looked like she was happy to be there, after all any school is better than no school at all…isn’t it?

The principal, Miss Trunchbull, was a terror. Matilda soon saw her hammer-throw a girl over the fence into an adjacent field. When she landed safely, the Principal angrily herded the children back inside. But Matilda’s teacher Miss Honey was one of those remarkable people who appreciates every single child for whom they are.

Miss Honey was a wonderful teacher and a friend to everyone. But her life was not as simple and beautiful as it seemed. Miss Honey had a deep dark secret. Though it caused her great pain she did not let it interfere with her teaching.

With the FBI watching her father and the Trunchbull terrorizing her school it was a rare and happy moment when Matilda could just play with her friends.

Most great ideas come from hard work and careful planning, of course once in a while they just jump out at you. Lavender, a friend of Matilda’s, put a newt they found while playing in the Trunchbull’s water pitcher.

Miss Trunchbull ended up drinking from the pitcher (the class burst into laughter). Matilda’s telekenesis resurfaced here when Miss Trunchbull blamed her for the trick. Matilda flipped the glass and the Newt flew onto Miss Trunchbull.

Matilda went home with Miss Honey after class and learned that Miss Honey was the great-niece of Miss Trunchbull. Miss Honey opened up to Matilda completely. With this new knowledge, Matilda set out to learn what Miss Trunchbull was afraid of.

So, they went to the Trunchbull’s house and searched it. Matilda was able to deduce that Miss Trunchbull had murdered Magnus, Miss Honey’s father. The Trunchbull came in only a few minutes later, realizing someone was in her home but unable to determine whom.

Matilda later tricked the FBI agents and took a tape from their camera. The tape had evidence of what her father had been doing with the stolen car parts. So, she bought a little time for her dad to come to his senses, but now Matilda had bigger fish to fry, much bigger.

Having power isn’t nearly as important as what you choose to do with it and what Matilda had in mind was nothing short of heroic.

Matilda tormented Miss Trunchbull at her home, using her telekinesis to make it seem haunted by Magnus. Then again the next day in the classroom, she convinced the superstitious Trunchbull that Magnus was going to get her if she didn’t leave town! The evil principal fled town in her car.

And the Trunchbull was gone. never to be seen or heard from, never to darken a doorway. Miss Honey moved back into her house, of course Matilda was a frequent visitor.

Well, the FBI finally caught up with Harry and Zinnia and was coming after them. They swung by Miss Honey’s house to pick up Matilda and make a run for it. Matilda and Miss Honey attempted to convince her parents to let Miss Honey adopt her for good. And doing perhaps the first decent thing they ever did for their daughter, the Wormwoods signed the adoption papers.

So, Harry and Zinnia got away and as bad as things were before, that’s how good things became. Miss Honey was made principal of Crunchem Hall. The school had to expand because children never wanted to leave. Matilda found to her astonishment that life could be fun and she decided to have as much of it as possible. After all, she was a very smart kid.

The happiest part of the story is that Matilda and Miss Honey each got what they’d always wanted – a loving family. And Matilda never had to use her powers again…well, I mean almost never.

Matilda is an average looking little girl with straight shoulder length hair that she wears tied back with a ribbon. She wears knee length dresses, usually with a white undershirt.

Matilda is a very sweet kid who enjoys books and loves to learn. Her favorite author is Charles Dickens , and her favorite book is Moby Dick .

Matilda seeks out fun things and the kindness of others. Spider-Man has “With Great power comes great responsibility”; Matilda has “When a person is bad that person has to be taught a lesson.” and she’s just the person to teach them that lesson.

Harry “When a person is bad that person has to be taught a lesson.”
Matilda “Person ?”

“The Principal is insane, she threw a girl over the fence by her hair !”

Zinnia: “Well, I don’t think it’s fair bumbkins…”
Harry: “What…”
Zinnia: “You get all this stuff from catalogs and I don’t get anything.”
Harry: “It’s not catalogs it’s car parts, sweetness. It’s business.”
Zinnia: “Oh, If it’s business why don’t you have it sent to the office ?”
Harry: “Because the cops may be watching the office.”
Matilda: “The cops are watching the house.”
Mr. Wormwood: “What ?!”
Matilda: “They’re parked outside, right now.”

Matilda could turn into quite the vigilante one day since she truly believes people who do wrong should be punished. Because she is young she could be taken into a team, the Teen Titans comes to mind or perhaps young Justice.

In the Marvel Universe she could be considered a mutant which opens up a lot of possiblities with the X-men. Having Xavier trying to get to her before some mutant haters show up at her door. 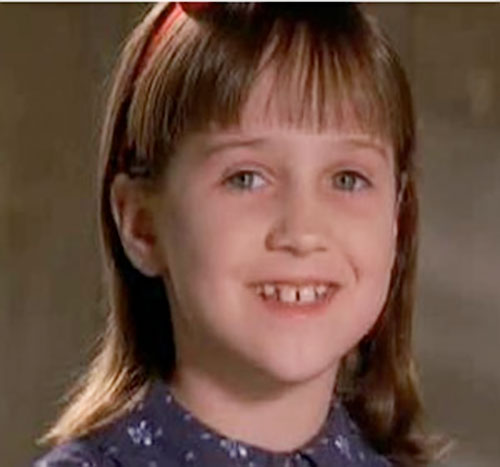 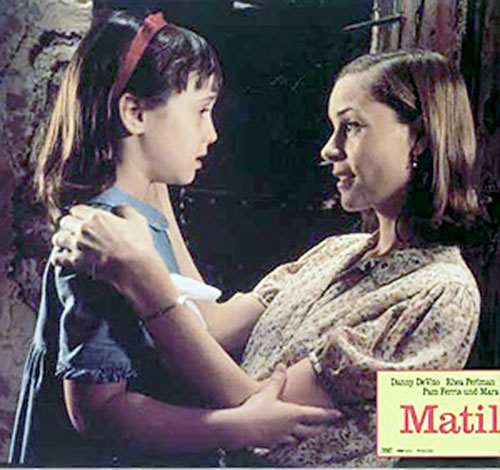 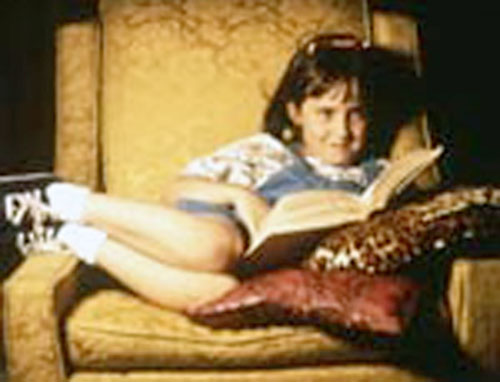