A sorcerer of the Djinn Guild of Ciress, Matua knows a number of magics. His most common magical creation is force fields, which seem relatively unaffected by the energies of the Negation Universe. His training allowed him to quickly attune himself to these energies, so he was soon using other sorceries.

Most of his magic appears to be conjuring creatures composed of a golden energy to carry out his bidding. Some of these conjurations, such as the faeries, appear to be sentient. For instance they can carry out a conversation with him. 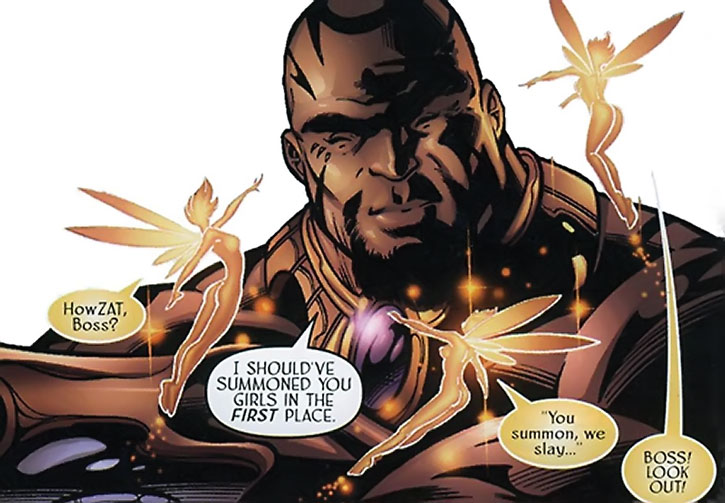 Examples of his conjurations include:

(While these are thematically conjuring creatures to carry out his wishes, most of this can be treated, in DC Heroes RPG terms, as special effects for his Sorcery.)

His most dangerous magic was the Spell of Scimitars. This one conjured a circle of blades. But it needed to be cast in an open area if the sorcerer didn’t want to be caught in the attack.

Matua was born on the planet Ciress, where magic was an everyday tool. Raised in the lands of the Djinn Guild, he was enrolled at the guild school by his parents, against his wishes. He only stayed to satisfy his parent’s expectations. Matua was trained there by Emir Sayad. 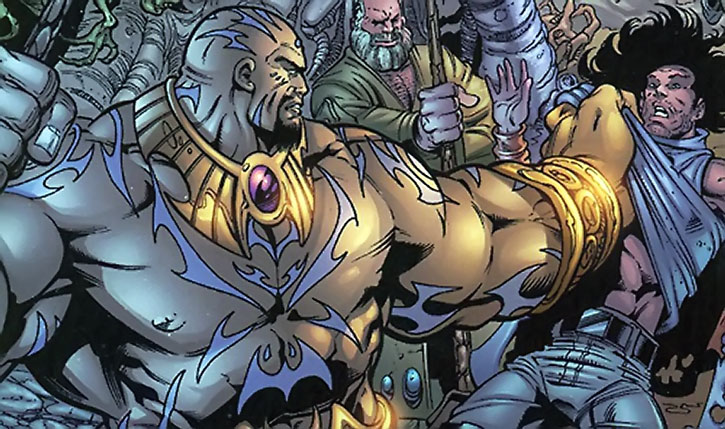 Growing up to become a skilled conjurer, he excluded himself from the highest ranks of the Djinn Guild when he chose to marry his beloved Saria. They had three children together, but Saria and the children died.

It was three years after he lost his family that he was abducted by an unknown force. Matua found himself stranded on an unknown planet with 99 other individuals from other places in his universe (the Bright Universe as the residents of the Negation referred to it).

A pecking order evolved, and his physical might allowed Matua to stay high in the order, as he became one of the guards for Evinlea, one of the godlike First.

Kaine, relatively weak and labelled Pest for his irritating questions, convinced the others that they had been brought here for testing by hidden observers. The rest of the prisoners reluctantly tried following his lead. His lead led their captors to bringing them into the prison proper, where they underwent further intensive testing. 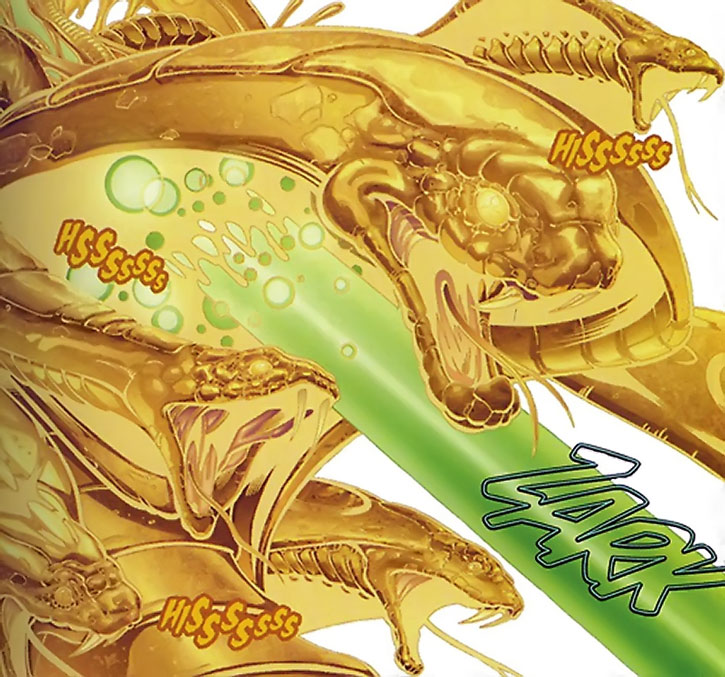 Kaine again took the lead to break them out of the prison. Seizing a craft, it lifted off before most of the prisoners were aboard. Evinlea managed to take herself and a few others, including Matua, off-planet in an air bubble. That was just before the Negation destroyed the planet to try to stop their escape. They were rescued just in time by a passing vessel.

They stumbled across the other group of escapees on a lifeless planet. Hostilities ensued over the perceived abandonment. This was cleared up as being due to the stolen ship’s automated systems. But before they could decide on their next course of action, they were attacked by Lawbringer Qztr, one of the elite of the Negation.

Qztr was distracted from killing them when he discovered baby Memi to be completely immune to his attacks. He abducted her, taking the infant to the Negation god, Charon.

They soon found allies when the Battle Group came under attack from the Australians. Also recently abducted from the “Bright” universe, they had gained enormous power in the transit. They were dedicated to freeing the Atlantean, Gammid, from the clutches of the Emperor Charon.

Kaine’s group allied themselves with the Australians. They used the shell of the destroyed flagship of the Battle Group to slip through the warp gates and charge the Negation homeworld, where they’d learned both Memi and Gammid were being held.

They rescued Memi and Gammid, although the Australians were killed and Kaine was missing for a short while. The escapees then fled the homeworld. When they heard from Kaine soon after, they had to stop at a nearby planet to try and acquire some tech to get to him faster than their ship would currently travel. That was because they’d be unlikely to get to him in time as it was. 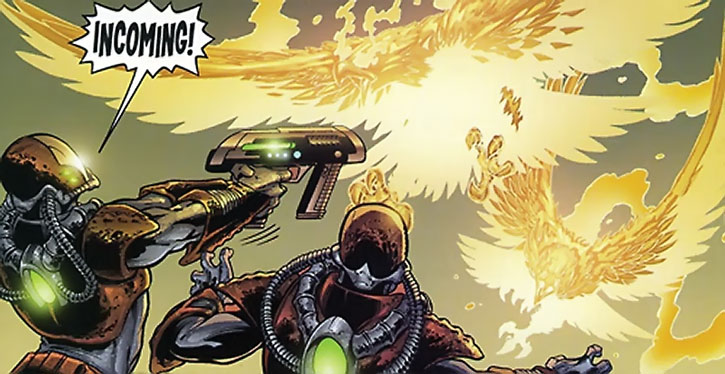 They rescued Kaine, and he tried to convince them to try and help free the resistance leader, held in a secure prison facility. Matua was the first to support him in this, and the others reluctantly followed.

Matua used his magic to infiltrate the facility, while some of the others made a noise at the entrance. Clearing the area near the target cell, Matua was soon joined by Drake, who ripped a hole in the cell wall. They were met by the Lawbringer Lqkr, who had been posted in anticipation of their attempt.

He easily handled Drake and Evinlea. Matua underwent unexplained flashbacks during the beatdown, finally making peace with the death of his wife and children, and preparing himself to meet them.

He cast his most dangerous magic, The Spell of Scimitars, which is equally deadly to its caster if cast in a confined area. The spell killed both Lqkr and Matua, and he died with a smile on his face.

Generally calm and gentle, Matua rarely hesitated on stepping into combat, especially if a friend was involved. Still grieving for the death of his family, Matua was emotionally numb at the beginning of his time in the Negation Universe. Gruff and private, he fell into line with the pecking order that evolved, using his size to keep his place as nobody’s powers worked.

As he began to become more attached to his new friends, he began to care more about things. Thus, he was the first to agree with Kaine about rescuing the resistance leader. He only really found peace in his last minutes, as he sacrificed himself for his friends, prepared to join his family.

“Thank you, my friends. It’s a comfort to know I can still call upon the Eagles of Atyaah.”

The Djinn Guild would be based on Zerox, the Sorcerer’s World.

Bonuses and Limitations:
Claws has AV (+1), is Serious Marginal (-2) has an Area Effect (+), and if it does not have the full Area to spread out in will also target the caster (-1).

When he first arrived in the Negation universe, his powers (apart from his Force Field, for some reason) were subject to the wild energies of the place until he became used to them.

During this time, any attempt to use a Power (or Ritual) runs the risk of a Catastrophic Burnout. The Burnout of an offensive Power resulted in Area Effect (1 AP radius) Energy attack centred on the character at the AP level of the Power, to which they are also subject.

This Burnout need only be bought off from the character’s highest Power to remove it from all, at half the cost of buying off a regular Burnout. During this time he mainly used his force fields.

He only gained the Exile and Mistrust Drawbacks, and the Language Advantage in the Negation universe. 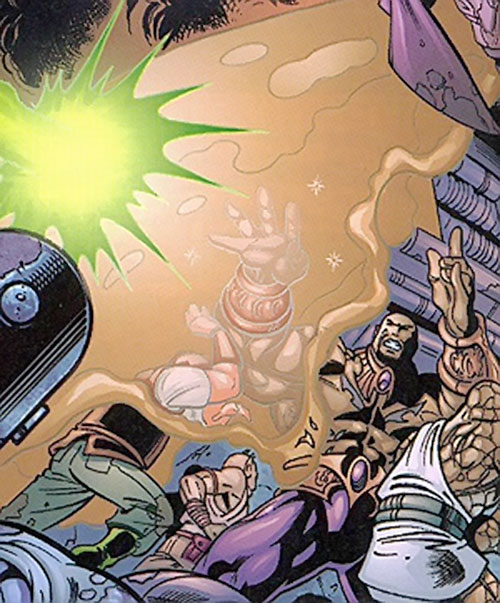