Mawmen are humans who have been killed and taken over by headcrabs. They are effectively zombies. Their only motivation is to kill pretty much anything that’s not from Xen.

They move slowly, but their claws are devastating. In DC Heroes RPG tersm, they will often use a Flailing attack against faster opponents. Easy to kill, they are most effective in numbers.

Within a day (14 APs of time) the mutation begun by the headcrabs enters its second stage. This is a faster and stronger version of the mawmen that also throws acid at enemies. This stage is sometimes referred to as a genome. The reason for this appellation is unknown, but may imply that the headcrab/mawman duo is intended to directly integrate Xen genomes into the Terran ecosystem.

This might be planned as part of a larger “xenomorphing” process by the Xen invaders that would eventually make Earth an ideal abode for Xen life forms.

The Black Mesa complex is a private high-tech research installation (with strong ties to the U.S. Government) located somewhere in the American Southwest. An accident in the Anomalous Materials Lab caused a dimensional breach into the world known as Xen.

The headcrabs were among the first creatures to fall through the breach into our reality. They acted as foot soldiers of a type, causing damage to the Black Mesa facility and turning security guards and scientists into mawmen. The mawmen now roam the corridors of the complex, terrorizing those that yet live.

Fearsome. They are humanoid, as their origin would suggest, but their heads have been completely engulfed by headcrabs. Additionally, their hands have mutated into vicious talons and most of them have a large, jagged wound running down the front of their torsos.

In the second stage of their mutation by the head crabs the jagged torso wound has become a large vertically slit mouth with acidic mucus which mawmen often throw at distant enemies. This second stage is also larger, having grown about a foot taller and broader, with hulking musculature.

Minimal. They may be seen at times poking around corpses or machinery with child-like interest, and will shamble toward human targets on sight, attacking with their claws.

Second-stage mawmen are more aggressive, quickly charging targets within 2 APs and throwing acid at more distant or inaccessible targets prior to charging.

This would be a moderate-level threat to the Earth, probably a good challenge for Young Justice or a similarly powered team. It might be a good solo challenge for Batman.

If the genome speculation above is correct, it is entirely possible that some headcrabs might escape and establish a hidden mawman colony somewhere in the deserts outside of Black Mesa. This could pave the way for a sequel scenario or campaign.

Given time, the mawmen might even become a sentient species whose intentions are not necessarily hostile. They might even have people start to join them voluntarily for personal reasons, which could cause all manner of social and cultural conflicts among local residents.

Bonuses and Limitations:
Acid can only be used if thrown, and thus uses DEX as its AV. It takes one Phase for a mawman to produce enough Acid for a “spit-ball.”

By Mark A. Ayen and Roy Cowan. 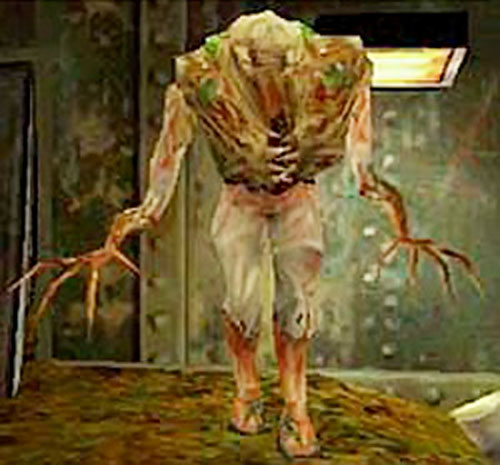