Edison Carter is an experienced field reporter. He has spent a great deal of time chasing stories on the fringes of society and in the face of strenuous opposition. His investigative ability is second to none. Carter has an amazing ability to penetrate organizations and conspiracies through a combination of guile, guts, and charm.

Because of the rigorous exertion that comes with being a field reporter in dangerous places, Carter is in good shape and is capable of holding his own in a fight.

Max Headroom is a computer-generated copy of Edison’s mind. In fact, he is so sophisticated that it might even be possible to transfer him into a clone of Edison’s body (though Edison was less than thrilled with the idea).

As a free-floating AI, Max is free to move about through any computer systems he can access. He’ll usually pop up to interact with others through TV screens or computer monitors.

Though he is a computer program, he does not have any computer programming or hacking skills. However, Max can play back anything he’s seen on TV or any of his memories as a standard audio/visual television feed. He can do the same with Carter’s memories, up to the time of the accident that resulted in Max’s creation.

20 minutes into the future, television networks have saturated human society. Even in the worse neighborhoods, where anarchy reigns, active televisions litter the landscape. It is a crime to install an off switch on a television, and the networks routinely use televisions to spy on viewers (referred to as “two-way sampling”).

One of the most famous people in this near future is Edison Carter. He’s an award-winning field reporter for one of the largest stations, Network 23. Carter has risen to fame exposing the infamy of others, particularly that of corporations engaged in profit making at the expense of human life and freedom.

One of these stories, which changed his life, was the exposure of blipverts.

Blipverts are advertisements run in compressed time. An advertisement that would normally run 30 seconds becomes a two second blipvert. The benefit of blipverts was that they kept viewer attention, unlike traditional advertisements, which gave “viewers time to switch channels.”

The ghastly side effect of blipverts was that it triggered a static charge in viewers with sedentary lifestyles, even causing some to explode. The blipverts were a Network 23 exclusive and the network was loath to give them up for fear of losing the Zik-Zak Corporation’s patronage.

Edison Carter caught wind of some unusual phenomenon affecting viewers. He pursued the story until the network pulled it.

Me and Ms. Jones

At this time Carter’s supervisor assigned him a new controller, Theora Jones, who could keep up with Carter’s zeal. A controller is a technical advisor in the office who monitors the feed, can access relevant information by means of computer (historical information, building blueprints, etc.), and otherwise provides real-time assistance to the field reporter.

Theora was an excellent match for Carter. She shared his enthusiasm, going beyond advice to active participation (hacking security systems, for example) while providing a voice of calm and reason to complement Edison’s passion. Together, Edison and Theora continued to investigate the story.

The investigation led Edison to the offices of Bryce Lynch, an adolescent computer genius who worked in secret for Network 23. Carter broke into Lynch’s hidden office and discovered a rebus tape showing the catastrophic side effects of blipverts. However, he was captured while trying to escape.

Edison had been caught after having been knocked unconscious by colliding head first with a “MAX HEADROOM” sign at the exit of the Network 23 garage. The CEO of Network 23, Mr. Grossberg, wanted to know what Carter knew before Carter woke up. So Lynch used an experimental program to create a computer-generated copy of Edison’s mind based on Edison’s synaptic circuits.

This computer copy of Edison went by the name of “Max Headroom”, the first thing it said (due to it being the last thing on Carter’s mind).

Grossberg finally decided to just dump Carter in the wastelands. He hoped to use Max Headroom, the world’s first “completely programmable presenter,” as a new ratings grabber.

Both plans backfired. Carter was very much alive and after being recovered by Theora, he made his way back to Lynch. By this time Bryce was feeling bad about what had happened to Carter, and assisted him in bringing Grossberg to justice.

Meanwhile, Max Headroom had escaped into the Network 23 computer system, and amused himself by interrupting Network 23 programming whenever the whim struck him. He would then provide sarcastic commentary on events.

Max’s appearances frequently embarrassed the Network by mocking the corporate practices and products of Network 23 and its sponsors. But these impromptu performances also drove up Network 23’s ratings.

In the wake of the blipverts scandal, Grossberg was removed from Network 23. He was replaced by Mr. Cheviot, a much more sympathetic man. Edison went back to field reporting with the able assistance of Theora and Bryce.

Max had become omnipresent. He would sometimes assist Edison, and sometimes query people about the nature of human existence and the works of television corporations and the entertainment industry.

In their sojourns into the wastelands, Edison and Max have acquired an ally named Blank Reg. Blank is a designation for those rare individuals who are not registered on computer. For good and for ill, they do not legally exist.

Blank Reg and his lover Dominique broadcast the underground station Big-Time TV from their motor home in the wastelands, and frequently provide Carter and Max with covert assistance.

Edison Carter is a tall, gaunt Caucasian male with a wiry build and broad grin. He has fine hair with a receding hairline and an aquiline profile.

Edison usually wears a weathered dark brown leather jacket and loose clothing in subdued colors. It looks casually stylish but at the same time gives him freedom of movement and the ability to blend into the background, which are valuable traits for an investigative reporter.

Max Headroom looks just like Edison Carter, of course, except his hair always looks slicked back and he always appears on-screen solely as a head shot (i.e. only viewed from the shoulders up). He’s usually wearing a shiny black three-piece suit. The background behind Max’s head is usually a simple multi-color display.

Carter’s life revolves around exposing injustice, particularly those perpetrated by large companies and organizations, including his own Network 23.

He pursues cover-ups with a fanatical zeal and will risk life and limb to uncover the truth. He has a certain crass charm, and often expresses himself in a sarcastic, though not cynical, way.

It’s important to remember that Carter’s not interested in pandering to the lowest common denominator of sensationalist reporting. He’s not interested in tawdry affairs among politicians or celebrities’ personal lives. Rather, he follows leads about harmful practices carried out by the most powerful and influential institutions of modern society.

Carter’s genuinely interested in helping to fight the evils he investigates and often intervenes directly in bringing criminals to justice, with his reports facilitating those ends rather than being an end in and of themselves.

Max Headroom’s personality is very similar to Carter’s, as would be expected given his origin. However, while he has Carter’s memories, Max often seems to lack a context for them, which inspires frequent questions about human behavior.

Max also has a hard time taking things seriously, because his electronic existence has divorced him from the “real” world to some degree. It often takes pointed reminders about the consequences of certain situations to keep him on task.

When Max isn’t interacting with Carter or one of his other friends, he’s often roaming the TV networks. Sometimes he’s simply jumping about watching the world. All the TVs in Max Headroom’s time are two-way audio/visual devices, so he can see and hear whomever is on the other side of the screen as easily as they can see him.

Other times, he’ll use recordings of various shows and his own memories to create videos regarding confusing aspects of human nature or society, which he personally narrates and broadcasts.

In many ways, Max and Edison are complementary people. They often work together on Edison’s cases, and Max’s explorations of human behavior often complement Edison’s investigations into human society. Their mutual popularity has also had a gestalt effect. It makes them much more influential separately than they are apart.

At the same time, there is a certain tension to their relationship. It arises from Edison’s conflict with the idea of co-existence with Max. His individualistic nature finds the existence of a duplicate who greatly overlaps his personal and professional life a little confining.

After an especially emotional confrontation between the two during one case, they came to a better understanding and appreciation of one another. This helped lessen this tension considerably.

“This is Edison Carter coming to you live and direct from Network 23.”

“How can you tell when our network president is lying ? His lips move.”

“When you get a Zik-Zak burger, be sure to have your wallet ready, because that’s what they taste like. By shipping Zik-Zak Burgers in individual wrappers, some of the plastic rubs off on the patties, doubling the nutritional value !”

Edison Carter can be used whenever the GM needs an intrepid field reporter. Carter and Max Headroom are well suited to most any dark near-future setting dominated by corporations and mass media. The worlds of Robocop and Blade Runner come to mind.

Conversely, Carter can make a modern-day campaign more dystopian by his presence, exposing dark conspiracies amidst the government and/or mega-corporations.

He may have been involved in investigations regarding Lex Luthor’s less-than-philanthropic nature. He probably helped put pressure on the US government to overturn the No Man’s Land edict on Gotham City by broadcasting live reports of the conditions therein, among other things.

He’d be appropriate as a contact or assistant to any heroes investigating corporate or political malfeasance.

Note:
The Network 23 Connection is Low because of its erratic nature. When backing Carter on a story the network functions as a Powerful Connection, but when his pursuit of a story is adverse to the network’s desires they can actively hinder him.

Equipment:
Video Camera [BODY 05, Radio Communication: 13, Bonus: Radio Comm includes audio and visual (+1FC), Cost: 61 points. This large audio/visual camera transmits a live feed to the Network 23 offices (or any other designated receiver) and also provides an audio link between the reporter and his controller at the home office. The camera is very durable, and Carter has used it as a melee weapon on occasion].

Network 23 often provides Edison with personal transportation as necessary, up to and including a Network 23 helicopter.

Max Headroom is not a sidekick in the standard sense, but rather a separately existing computer-generated version of Edison Carter’s mind. 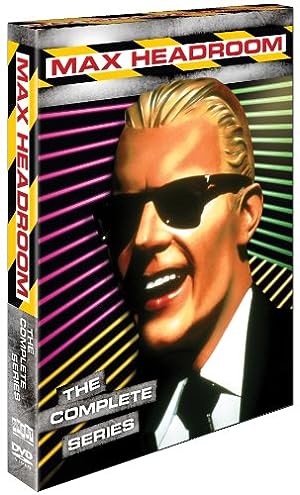 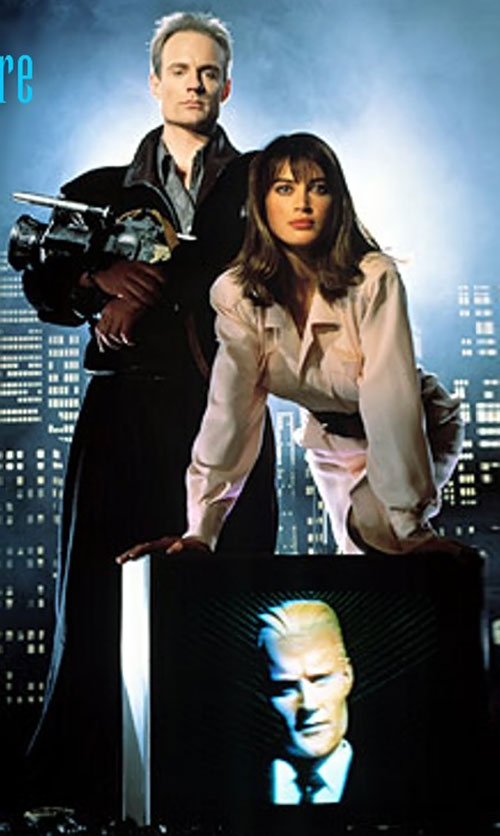 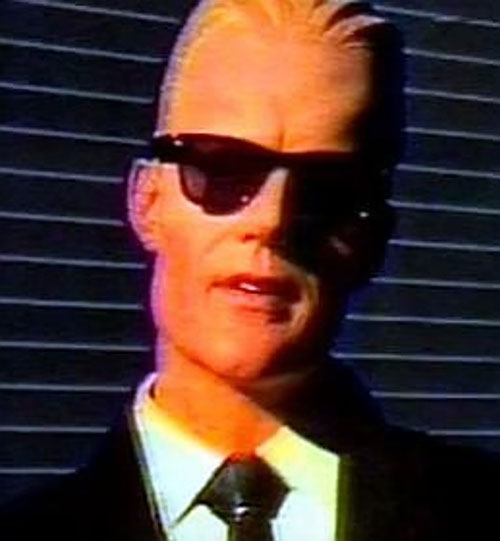