Stryker is a sort of weaker Hulk, with just the core abilities. There’s not enough material for fine estimates, but he was surprisingly strong and durable given his atypical exposure to gamma rays. Perhaps his ruthlessness and aggression contributed to his gamma-granted might.

He seems to be in the “Class 90” strength range, and was enough of a fighter to force Banner to relinquish control and tap the savagery of the Hulk. Stryker could also take blows like a champ, frustrating the Hulk as his opponent wouldn’t go down despite all the smashing.

Max “Hammer” Stryker used to be a major crime boss in New York City around the 1940s and 1950s. Many New Yorkers still remembered the name (or his moniker as the “King of Crime”) by the early 1980s.

He has occasionally claimed to have mentored the Kingpin, which is an exaggeration.Wilson Fisk did some of his formative years in “Hammer” Stryker’s mob, but there is no evidence of close links between the two men.

Stryker’s rivals were Don Rigoletto (for whom Fisk also worked at one point) and Alexander Bont. Their best-known predecessor as crime bosses included the likes of “Lucky” Luciano  or Silvermane.

It was Bont who eventually achieved prominence over his rivals. This likely is what led to “Hammer” Stryker semi-retiring, though he kept a core of criminal activities running. Bont was sent in prison some years after Stryker’s semi-retirement.

Bont’s fall was brought about by Daredevil as one of his earliest cases. Using publication time, that means early to mid-1960s. Bont is a retcon , but his fall would have happened around the same time as Daredevil vol. 1 #04 or so.

In other words, Stryker had the luck to assume a much less visible position in the New York City mob hierarchy a few years before the big emergence of costumed heroes and villains would change the game.

Only the good die young

Stryker thus aged in a sort of safe, relative obscurity. By the 1980s he was an old, sick man confined to a wheelchair. He clearly was nearing death. Somehow, he learned that Drs. Banner and Waynesboro were working on a gamma-ray treatment which could revitalise even the venerable.

He petitioned them to serve as a Guinea pig. But Banner, who was sensibly worried about the potentially catastrophic side effects of the treatment, refused. Stryker’s clock was ticking, though. And he had never been a man to take ’no’ for an answer.

Stryker presumably had Banner’s lab under surveillance. Thus shortly after a successful experiment on a very sick and aged dog, he made his move. His crew busted the hitman Boomerang out of prison. Stryker immediately sent him to Banner’s lab to kidnap Dr. Waynesboro.

Boomerang’s special weaponry was sufficient to slow the Hulk down. Stryker and his men then entered the lab. Boomerang flew Waynesboro out as an hostage to ensure Banner’s cooperation. Therefore, the Hulk’s alter ego was forced to administer the gamma treatment to Stryker.

Just like with the old dog, the initial results were miraculous. Like with the dog, the only side effect was a green hue to the skin of the patient. The overjoyed gangster told Banner where Waynesboro was held and Banner left immediately.

However, on his way to free Waynesboro, the Hulk was taken to the Beyonder’s Battle World to fight in the Secret Wars . Though he eventually came back to Earth, the Hulk had been wounded on Battle World, and was reverting to his old savage state.

While the Banner consciousness was dimming and his temper getting volatile, the Hulk managed to free Dr. Waynesboro – severely injuring Boomerang in the process. He then back to the lab. However, in the meanwhile, “Hammer” Stryker had been busy. 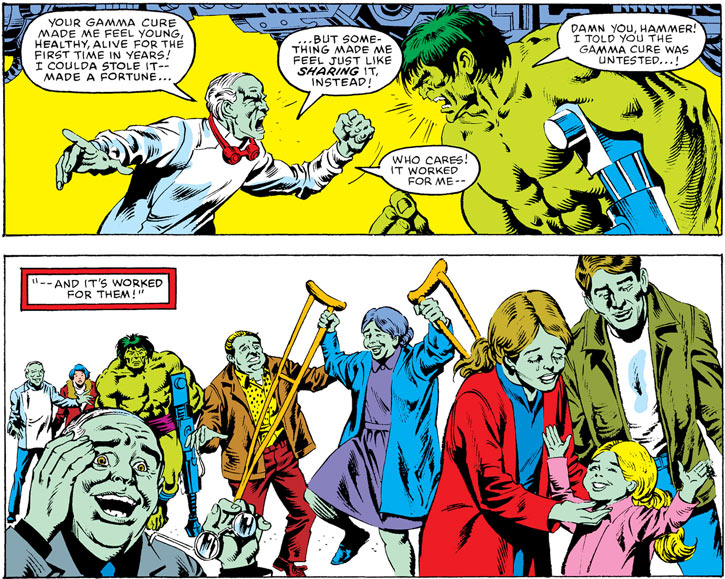 The miraculous cure had given the mobster an epiphany. Stryker felt a need to share this blessing rather than just sell off the cure as he had intended. He publicised what had happened. Numerous supplicants, often suffering from serious handicaps, had come to the isolated lab at Northwind Observatory.

By the time the Hulk came back to the lab with the freed Dr. Waynesboro, there was a crowd around the lab. A number of people had been cured – their pale green skin a sign of the treatment.

Seeing his research and his work so recklessly exploited without any care for the consequences made Banner furious, further tipping him hulkward. Furthermore, the owner of the test dog, then came in with the corpse of his pet. Shortly after the treatment the dog had gone murderously berserk and had acquired super-strength, forcing its owner to gun it down.

It became evident that a similar fate likely awaited Stryker and those whom he had healed. The shock of this revelation may have hastened the onset since minutes later, Stryker hulked out.

Monsters and a knight

Banner turned into the Hulk, but his control continued to slip. Furthermore, Stryker was too strong for a tame, Banner-controlled Hulk to defeat. To defend himself, Banner was forced to increasingly let the Hulk take over.

In the meanwhile, Rom the Spaceknight detected the gamma energies at Northwind and came in to investigate.

Dr. Waynesboro briefed him. Rom then used his alien tech to drain the gamma charge out of every person Stryker had foolishly exposed to the untested treatment. Rom and Waynesboro found the savage Hulk outside, smashing a defeated Stryker. Rom managed to turn Stryker back into a human being, but despite Waynesboro’s pleas could not cure the Hulk. 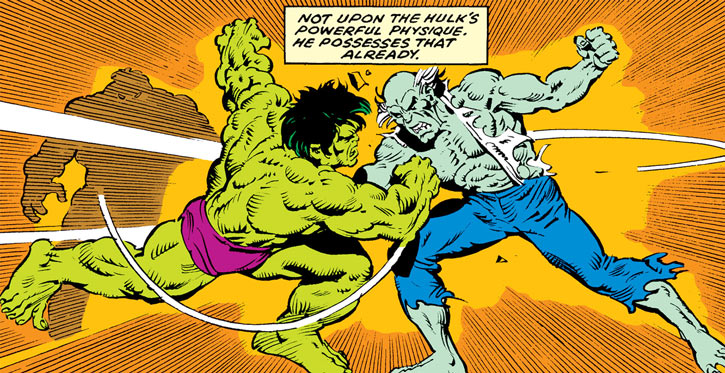 Still, Rom and Waynesboro had managed to prevent Banner from becoming a murderer because of the Hulk. Stryker was still alive.

What became of him is unrevealed. But given his very poor health and the shock of what happened, it is probable he did not live long past that night.

One of “Hammer” Stryker’s legacies, though, was the return of the Savage Hulk. His schemes had ended the era of the Banner-controlled Hulk who had earned a Presidential pardon and had a statue of him in Manhattan.

Stryker was a mobster. He was a brutal man with little patience and a very assertive idea of his own power and authority. However, he was terrified of death and was determined to try everything to escape old age. Perhaps Silvermane’s strange adventures encouraged him.

After the gamma exposure, he had a sort of epiphany (perhaps an odd side effect of the treatment). He now wanted to do good, recklessly sharing the secret of the Banner-Waynesboro process and basking in the glow of the miraculously cured.

When he hulked out, he retained his consciousness for a minute or so. But he then utterly sunk into a berserker rage that only ceased when Rom turned him human again. As a gamma mutate he just called himself “Hammer”. He would chiefly (and repeatedly) expound about his desire to smash.

“You hurt Hammer ! Hammer will smash you for that !”

As a human, Stryker was just a very aged, wheelchair-bound, man in very poor health. However, his mental capacities seemed to be more or less intact. In his youth, he was probably fairly strong and adept at fighting, but there’s no way to evaluate that.

As a human, his Motivation is Power, his Occupation is Mostly Retired Crime Boss, and his Wealth is 010. He presumably has a number of Connections and other assets.

Perhaps due to his fear of death, Stryker kept the bulk of his HPs for LDD, making him hard to take down.

None in gamma form.

On the uncapped scale (see the OMACS 2 document):

Source of Character: Hulk issues around 1984. 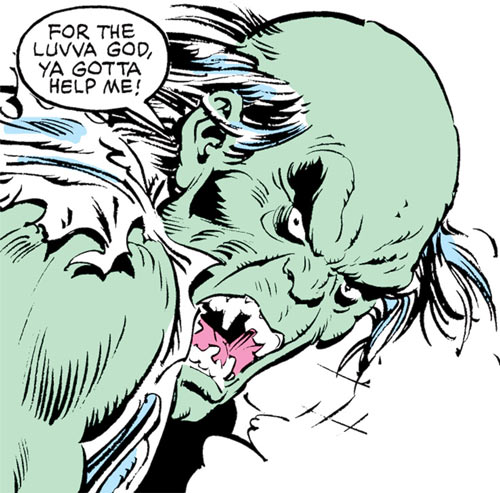 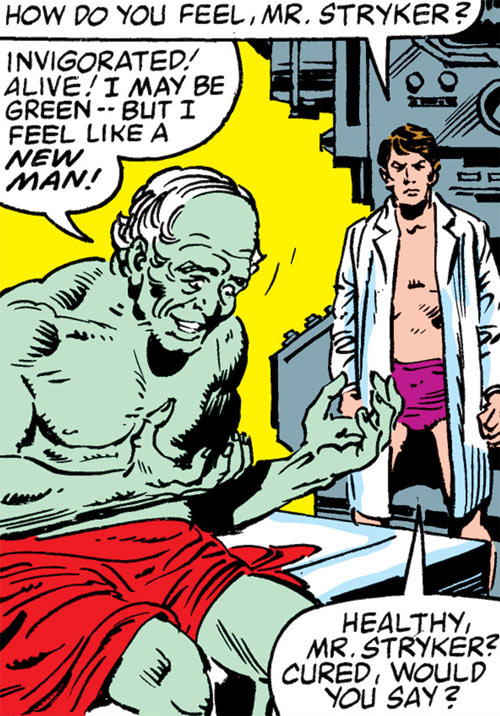 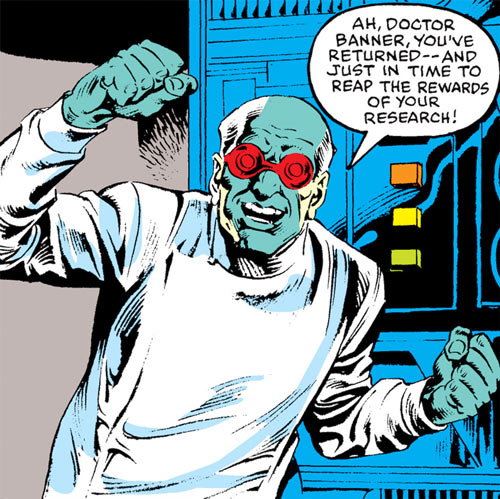 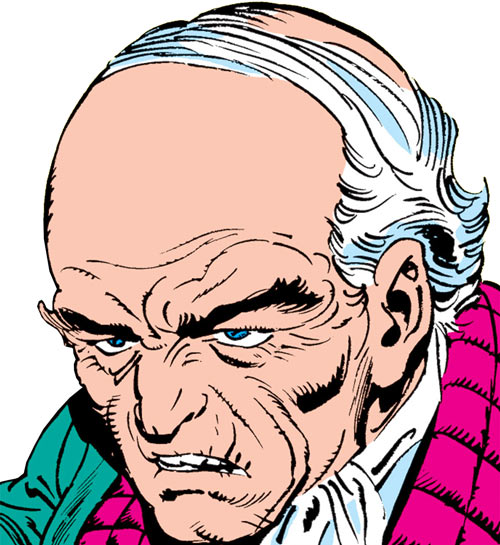 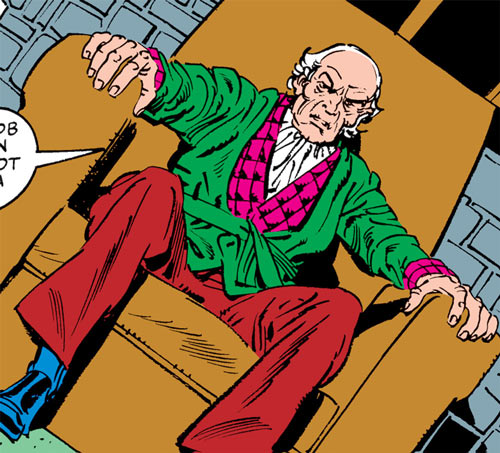