Maya is a character from the Borderlands 2 video game.

If you’re not well familiar with the games, you should first read our Borderlands setting primer. Which also has technical DCH notes and other things.

Maya is one of the six Sirens in the universe. This means that she has super-powers, having to do with Eridian energy.

Unlike Lilith and Angel, she has demonstrated no ability to supercharge by “burning” Eridium. 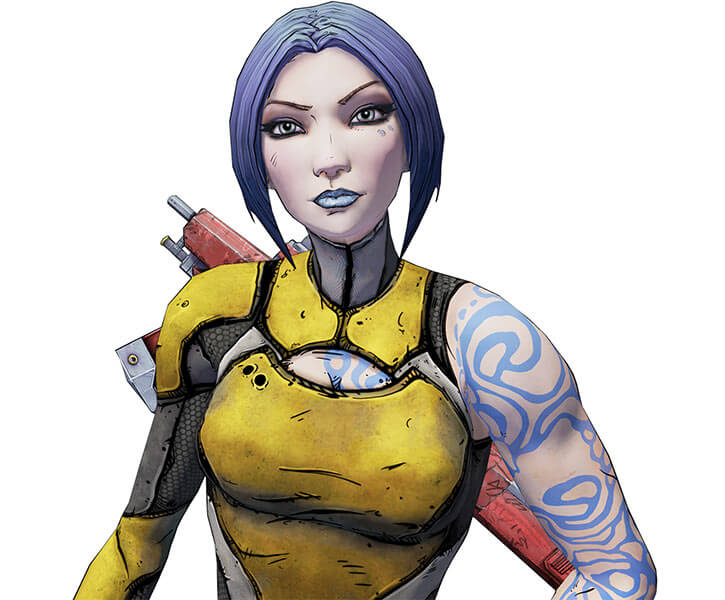 Hold it right there !

Her main ability is called a “phaselock”. A sphere of combined Eridian energies immobilises and lifts an enemy into the air, making them a captive target.

Unless Maya is right outnumbered, that’s a major tactical edge.

With training, Maya has learned to deploy other Eridian energy effects :

(Here I’m assuming that Maya has more powers than what is feasible in-game at that level. Normally, you optimise either for a solo/DPS build or a support/healing build. But since Sirens are established in-universe to be real powerful, I’m taking that liberty.)

Maya is an elite markswoman, driver (except when I’m playing) and hand-to-hand fighter. She’s in superb shape and has lightning reflexes.

Though we don’t know the details, she went through decades of “warrior monk” type training and conditioning.

Given the way she acrobatically dismounts from larger vehicles, she presumably has training in gymnastics.

Between her physical talents, her Siren powers and a good head for tactics, she can demolish much larger forces. As Handsome Jack once explained, normal bounty hunting teams do not stand a chance against a Siren’s, quote, “crazy-ass powers”, endquote.

Maya tends to alternate between a high-powered sniper rifle at range, and a selection of submachineguns at closer quarters. Other weapons may come into play in specific situations, or if running low on ammo. 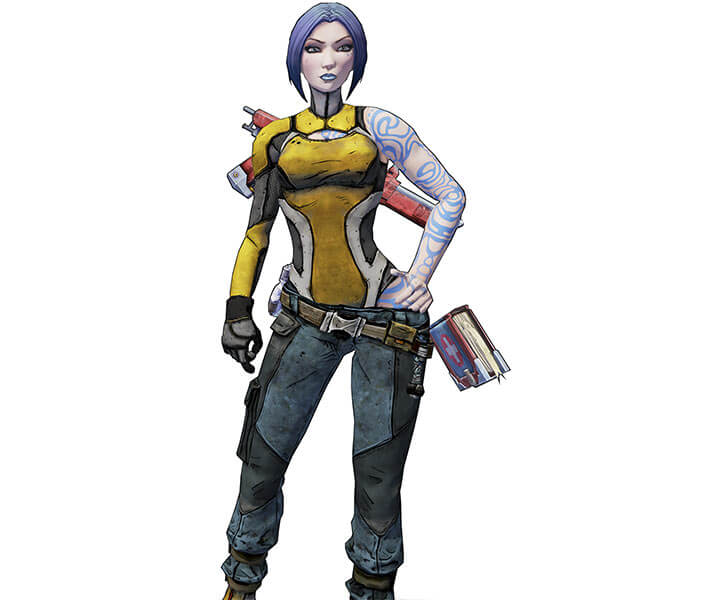 I had this tune on loop whilst writing this profile. So for me it’s the official soundtrack.

Pomplamoose isn’t a multi-million-dollars world-beating act, but they do it in a fun and friendly way. And one fine day, they hit on a brilliant way to do a mashup between two great songs, Eurythmics’ Sweet Dreams and the White Stripes’ Seven Nations Army.

Maya was found as a baby on the planet Athenas. She was taken in by the Order of the Impending Storm.

They eventually realised that she was a Siren. Apparently, Athenasians have a rough sense of what Sirens are. The simplest hypothesis is that the woman who preceded Maya was well-known there.

The religious Order raised Maya by telling her that she was a great holy warrior. They said that only she could defend Athenas against a mighty but poorly defined “evil”. She was kept sheltered, and bamboozled by the senior Brother Sophis.

One line of dialogue also implies that Sophis seduced Maya when she was much too young to know better.

Meanwhile, the Order boasted that they had a weaponised Siren. Dissidents would be executed by Maya and her terrifying “magic powers”.

Song of the Siren

However, the Order of the Impending Storm wasn’t too competent. Perhaps they had grown complacent after dominating life on Athenas for too long.

Maya thus didn’t believe in their tales. She also could see that they didn’t actually know much about Sirens. She obsessed over finding more.

(Tannis being insane, the “paper” was presumably closer to an unhinged MySpace post than something found in a peer-reviewed journal. Plus, journals in the Borderlands future are prolly paywalled in ways that even Elsevier would find grossly abusive.)

You want the truth ? You can’t handle… ah, never mind.

When Maya was 27, Sophis set up a first public execution. But Maya didn’t want to kill someone without knowing *exactly* what was going on.

Furthermore, the ceremony was so badly organised that she overheard that the man was to be publicly slain… for not paying church tithes.

Maya refused. Brother Sophis tried to force her, and she executed him. As everyone was leaving real quietly and real politely, the lass decided to travel to Pandora.

Though this planet was horribly dangerous (and just plain horrible), and finding answers seemed like a long shot, she felt that she had to do it.

Maya seems to be a serious, curious young woman with an interest in truth and knowledge.

She’s particularly driven to learn more about Sirens. And feels she has to know about her nature before she can make decisions about her life.

Unlike the vast majority of Pandora’s population, she appears to be benign, mentally healthy, and to use logical reasoning. Still, there’s a streak of power-happy cruelty in some of her combat barksCanned, repetitive lines uttered by video game characters (usually during combat)..

Maya was raised in an austere monastery, so there are aspects of life she has next to no experience with. But she’s chill about that.

Her experiences with being manipulated, misled and abused by Brother Sophis have left her with an hostile attitude toward obedience, hierarchy and perhaps religion.

Maya’s phaselock power being used on an Hyperion attack robot. Don’t worry, that robot totally had it coming. 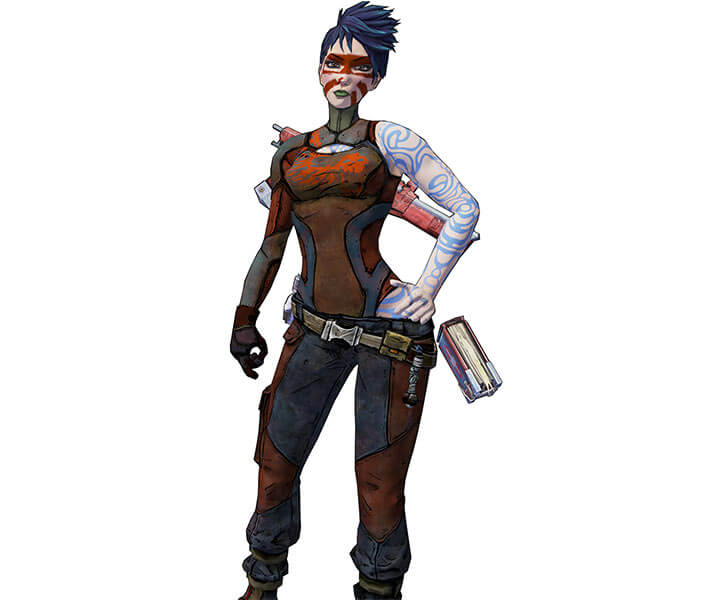 The customised Maya appearance I usually use. She adapted to local aesthetics is all.

This is Maya circa level 37, with a Cataclysm focus and some extra, imaginary points in Harmony.

Ordnance is based on what I happened to have when I finished Normal difficulty.

Obvs, there’s simplification and translation involved in her Powers. This is especially true since character design BL2 hinges on adding riders to the character’s Action Skill. So Action Skills end up doing an awful lot of things at once.

There’s prolly something to do with Vampirism as the last attack before a phaselock sphere collapses, to represent the Sweet Release ability. But that’d be a lot of verbiage, and I already went long on her healing stuff (roughly representing Restoration, Elated and a Nurse class mod).