Mayflower was a member of the Force of July, a group of US hardliners who repeatedly fought Batman and the Outsiders during the 1980s.

See the team profile at the hyperlink above for more context.

Mayflower has the ability to control plants, animating them and causing them to instantly grow to large sizes as suit her purposes.

Her ability to manipulate plant life is so extensive that Mayflower could:

She is also sensitive to the status of nearby plant life even when not directly controlling it. She once detected Geo-Force’s approach to the ASA’s hidden base because the heat generated by his flying ability burned some of the local vegetation when he landed.

Her connection to the vegetation she was directly manipulating was so great that damage to those plants resulted in a psychic backlash. 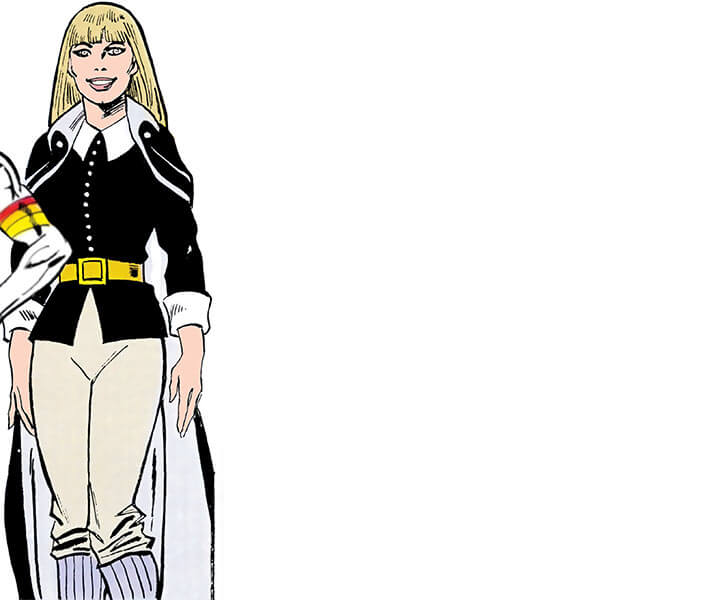 This is likely because her abilities were innate rather than the product of the ASA’s research. Therefore, the US government lacked the knowledge to duplicate them. 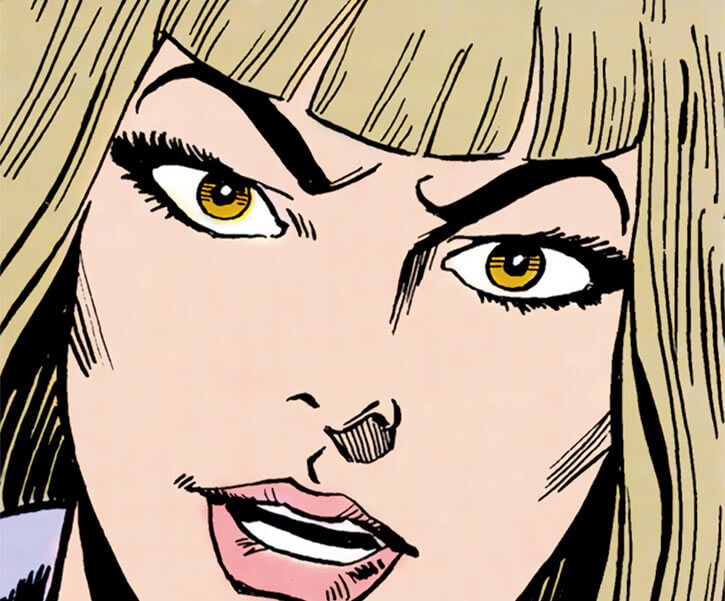 Mayflower is a petite White lass with straight shoulder-length hair.

Her costume is a stylized version of a stereotypical American pilgrim’s outfit:

She speaks with a heavy British accent complete with cliché “Cor Blimey!” diction.

When Mayflower uses her powers, her hands glow.

Mayflower’s bitterness over her rejection in her homeland fueled her devotion to the ASA, whose director accepted her and gave her both a home and a purpose.

Her dedication is so strong that she overlooks contradictory behavior. Such as Director Blairman’s castigating Geo-Force’s foreign accent and the “foreign blood” of Black Lightning and Katana while Mayflower herself is an immigrant with a pronounced English accent.

Her psychic bond with plants extended to an emotional one as well. She referred to them as if they were her beloved pets or even her children. This affiliation may have been furthered by the isolation she would have felt from her exile, strengthening her devotion to that which made her special and had a deep connection to her. 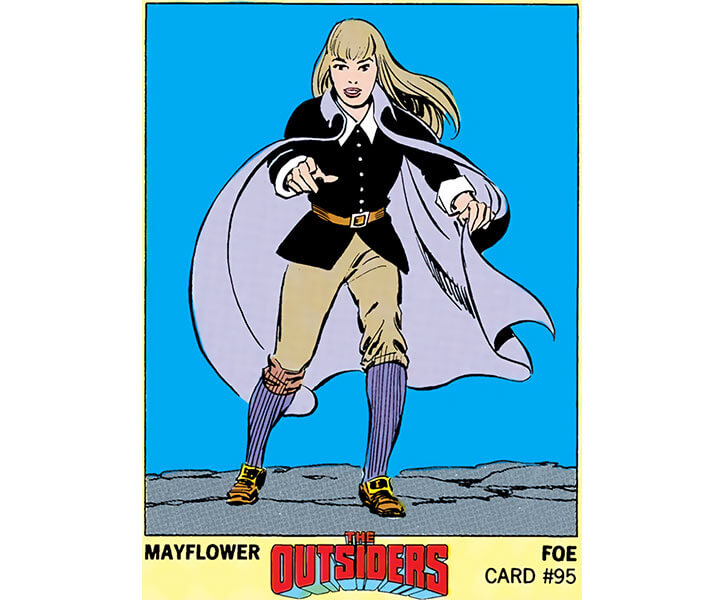 Katana: “Release me, witch !”
Mayflower: “No need t’get abusive, mum… you can call me Mayflower !”

“‘Freak,’ guv’nor ? That’s what they called me back in England, too — They shunned me, wanted nothin’ to do with me, so I came ’ere, then Mr. Blairman found me ! He took me in, made me feel wanted ! I work for ’im now an’ anyone who gets in his way answers t’me !”

Exile (England, Forced), Miscellaneous (Mayflower is psychically bonded to the plants she controls; if a plant she is animating takes damage, she suffers a Mental Bashing attack using the RAPs of attack against her plant as AV/EV and INT/MIND as OV/RV).

Phytokinetic ● 23 points ● Descriptor: Mutant
– Senses 4 (Ranged Detect, Extended 1 – Plants being damaged or killed, Feature – can sense nature of damage).
– Create 2 (Continuous, innate, Subtle 2, Limited 2 to plants).
– Array (all require significant plant mass to work, and have the Feedback Drawback if the plants used as a medium are damaged):