She appears to have other superhuman physical and mental abilities. She was durable enough to take blows from Maxima. She also seemed to mentally bolster the telepathic control used against Ice (Tora Olafsdotter).

Banner from the microheroes wikia .

It is conceivable that she was the one who mentally suborned Ice from the beginning, though in combat she uses her energy blades rather than telepathy.

The game stats were set based on the impression that she’s an Almerican alien, just like Maxima. This assumption results in a solid power level.

After her time with the New Extremists, Meanstreak was spotted fighting heroes during the Infinite Crisis.

She was also deported to the alien planet during Salvation Run  – presumably she survived the ordeal.

Initially Meanstreak was reluctant to fight Maxima and called her her sister. This is the main clue that they might share an Almerican background.

“Bold talk from somebody about to be ripped to pieces !”

This allowed them to credibly engage the JLA, since the League doesn’t generally spend HPs on a bunch of nobodies. But the tide turned as the New Extremists ran dry. Then their more powerful opponents regrouped, started two-teaming them, shook off the Stuns, etc.

Some sort of telepathic power ● 15 points ● Descriptor: Mental
– Mental Communication 2
– 7 points in undocumented minor telepathic abilities likely having to do with gradual brainwashing

Meanstreak’s Averaged PL might increase significantly if her undocumented telepathic powers turn out to boost her weak Will save. Which was simply left at lowish levels since we don’t know what her telepathic abilities are and whether she has any sort of mental defenses. 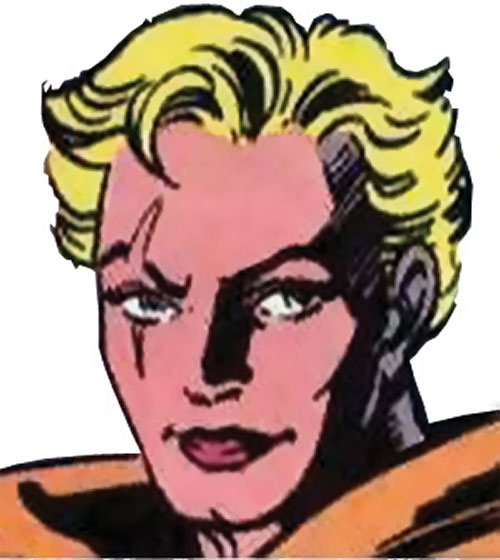