Henri Huang is a mutant. He has the power to move at superhuman speeds, with equivalent reaction time and reflexes. He is fast enough to break the sound barrier if he pushes himself.

His body heals and processes toxins at the same incredible rate. Yet oddly, he does not seem to need more than average sustenance.

Henri Huang’s background is more sketchy than most of his comrade’s. He worked for Alchemax, the huge multinational conglomerate, until Jordan Boone, his roommate, got him out of the “unbreakable” contract.

He apparently traveled the country. He picked up Krystalin Porter in Berkeley. They both joined Xi’an’s X-Men, apparently out of gratitude – IIRC they were in trouble when Shakti Haddad found them. They remained for the sense of thrill and for Krystallin Porter, whom he fell in love with.

Henri is brash and as quick to react as he is to run… mostly in the wrong directions. Though a brilliant technician, he lacks discipline and will jump the gun at the least excuse. He jumps to conclusions and acts on them before he thinks it out completely, much like a certain DC speedster…

OTOH, while Henri is certainly impetuous, a bit young and not a deep thinker, but he’s also a smart, observant young man and reasonably competent adventurer.

A part of his impetuousness comes from his cyberpunk-like wariness of everything and everybody – he makes it very plain that he trusts little. He never completely trusted La Lunatica, even though he was not one of those harmed by her psychic-vampiric abilities.

However, maneuvering to gain his trust is quite easy for the socially talented. For instance, Xi’an earned his trust so completely that Henri bought full-on into the “mutant brotherhood” ideals Xi’an preached.

Also, he easily gets bored.

Perplexed Casino Security Guy : “Uh, I don’t follow you.”
Meanstreak : “You couldn’t if you tried” (woosh)

Meanstreak is Impulse grown up. He works for causes now instead of for kicks, but his attitude is much the same.

X-Men 2099 was a very changeable book. But Henri stayed as an island of stability in a chaotic landscape. Things were only revealed and clarified about his past, his abilities, etc… – never really changed. 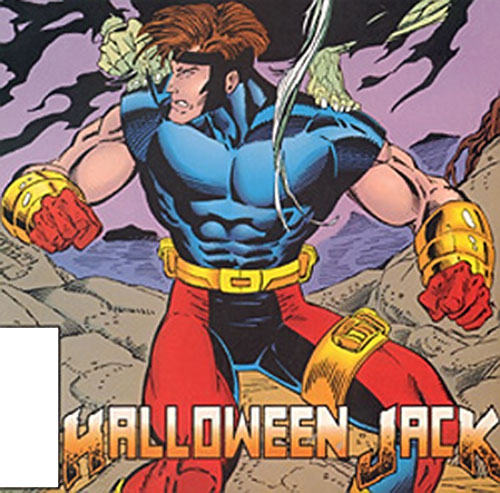