Meathead’s entire physiology is made of living tissues with the same general properties as ground pork.

He’s extremely strong and pretty much invulnerable. Each part of his body can function independently from the rest, and his metabolism allows him to repair any damage without discomfort or incapacitation. For instance a huge, gaping hole in his chest from a shotgun blast doesn’t feel painful to him or slow him down.

Buckley Mellon’s criminal career goes back to his early days in the Willeford Park area of Blüdhaven. While on a work release from Lockhaven Prison, Buckley worked for the Tastylinks Sausage Company. It was there he ingested an experimental cocktail of genetic material and hormones intended for meat-producing livestock.

This resulted in an horrifying transformation that altered Mellon in an amazing (and amazingly repulsive) way. His body now appears to be composed of ground meat.

The superhuman freak went to work for “Lunchmeat” Deever, a mob boss and “removal” expert in the Blüdhaven underworld. But he was arrested an sent to the Slab, a metahuman holding prison.

While he was away, Deever cut a deal with cops. He was sent to a witness protection program town with a new identity. While Meathead was still in prison, Deever was nearly killed by Hella and saved by Nightwing. But he was then killed by another criminal on the program.

When the Joker saturated the Slabs with a version of his Joker venom, Meathead was one of the convicts who acquired a Joker-like appearance and demeanour. Along with several other minor villains, he encountered Nightwing and was defeated.

Meathead is really disgusting. And he smells, and there are flies around him and sometimes he even has maggots. Uck.

Blows tend to leave a big, wet mark in his meat. When Nightwing gave him a flying kick in the face, Meathead kept a very clear imprint of the sole in the face during the whole fight.

“I’m gonna pull the tendons outta pretty boy, here. One by lovin one !” 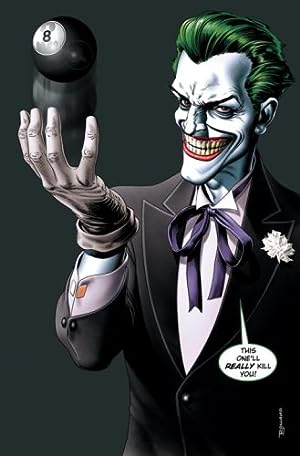