Later, he came to the realisation that he *is* a suit of alien power armor. There does not seem to be flesh and blood — his body — in the suit anymore, although the skeleton and some organs might remain.

It also has numerous sensors and a powerful HUD. In DC Heroes RPG terms this later feature contributes to Mecha’s INT, as the environment he sees is clearly labelled and color coded, allowing for enhanced decision taking.

USMC Private Art Thomasson was part of one of the various teams the US military lost inside the Vortex. These were sent to their highly probable death in futile attempts to learn more about that phenomenon.

Although reported to be dead in action, he was, unknown to the military, one of the very few that actually survived. For him, survival meant merging with the suit of armour originally worn by the alien scientist behind the Vortex when he came to Earth.

The altruistic and slightly naïve Thomasson went to Golden City. He saw himself as a hero and wanting to associate with other “cool heroes”. Grace allowed it, and he joined the Agents of Change just in the middle of their fight with Warmaker.

Mecha stayed with the Agents until the takeover by Law (whom he never trusted). He was then expelled from the team.

Law’s method to force Thomasson out was simple. He demonstrated that he was immune to Mecha’s Vortex-powered abilities. Then he started killing random persons in the room, saying he’d only stop slaughtering innocents when Mecha left.

Mecha continued to train with his “armour” on his own. He eventually learned to switch the suit to various modes (such as defensive mode or speed mode) at will.

He also started to have dreams of a powerful alien civilisation of warriors, all wearing armors like his. The person Thomasson was dreaming of underwent rites of passage. This is probably an involuntary access to a sort of audiovisual database of past events.

Thomasson is a nice, helpful young man. He grew up among a loving family in the countryside.

A large part of his personality was moulded by the USMC. He thus sees himself as a good soldier. Art usually uses military turns of phrase, follows orders and the law, and aims to act rationally and with tactical acumen.

His view of a super-hero’s role has a bit of the peacekeeping mission of the USMC military police in it.

He sometimes had troubles with the suit feeding him too much information. But he overcame this issue through constant training.

“Take cover ! This area is now a paranormal combat zone !”

“This is restricted airspace. Please leave the area immediately.”

Golden City is an interesting theme, and it and its super beings would make an interesting scenario for a JLA adventure. You could also Amalgamate  it and the city created by the Ultramarines – a team that Mecha could easily join if you don’t use the whole of Golden City.

The Mecha suit can change configuration between various modes. That changes its exact look, but keeping the same basic theme. This is represented by the Power Reserve.

Much of the know-how in the Mecha suit use is knowing how to use modes to their best advantage, and having the necessary stamina and skill to switch between modes. 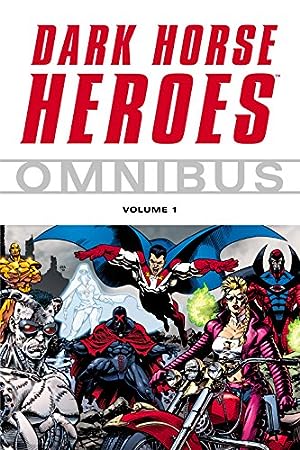 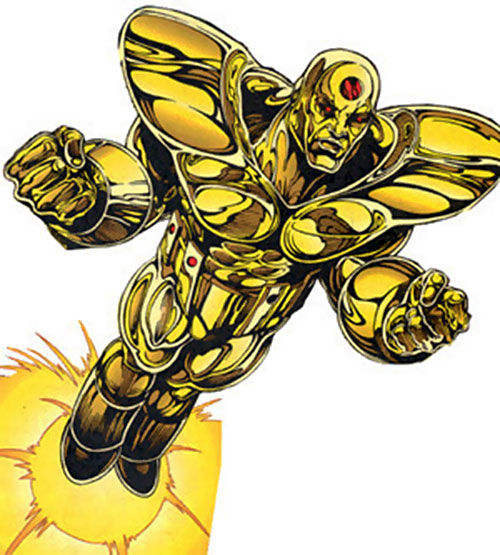 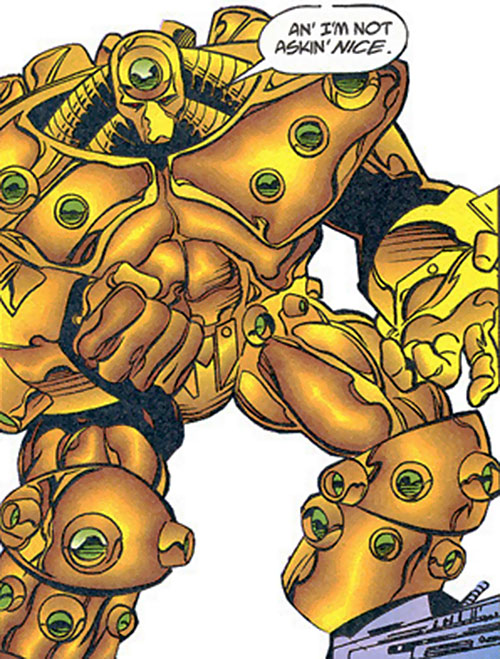 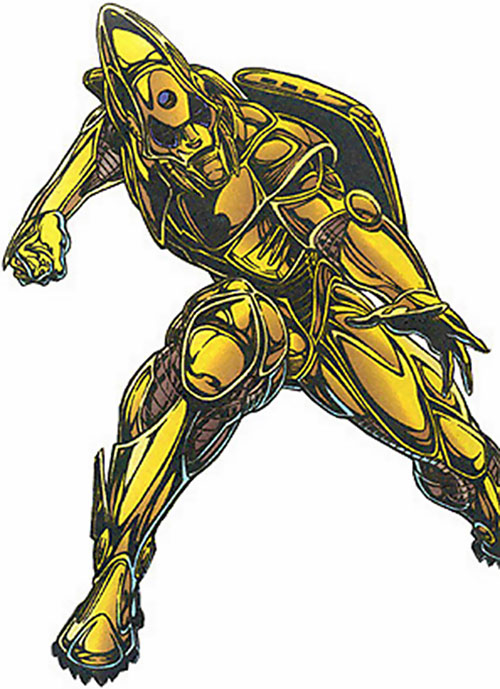