Mechamage is a sorcerer. She has exhibited the ability to:

Also skilled at science, she apparently built the armour she wears. This combination of technology and sorcery has evidenced the following abilities.

It appears to also be able to act independently of Mechamage, as at one point, detecting a significant threat, it engaged its disintegrator on its own to destroy the source of the threat, to Mechamage’s dismay.

Her armour also has a number of throwing stars, with which she seems skilled, that are able to neutralize enchantments on whoever they strike.

The sorceress within the Mechamage armour is secretive, not even wanting allies to see her true face. Based in a remote and ramshackle farm in West Texas, Mechamage apparently built the armour she wears.

Her first public outing occurred when the Fantastic Four were the subject of a mystic attack. Quickly learning of it, Mechamage hacked their communications systems. She thus learned where they were headed to get aid for their ally Alyssa Moy, comatose following the incident.

Mechamage followed the FF to France. Back then the sorceress Margali Szardos was imprisoned within the Citadel, a French prison designed specifically for sorcerers. Mechamage arrived just in time to help them against the demonically-possessed prison guards, who tried to kill Margali. Returning the Fantastic Four’s stolen souls, she freed Margali, who transported them all to Limbo.

They remained there a while for Margali to prepare the Four for the magical battle they’d soon fight. While there, Mechamage removed her armour, offering the surprised Human Torch a back rub after an exhausting training session. But she insisted he didn’t look at her face.

Impersonating Alyssa Moy, Mechamage infiltrated a Hellfire Club party alongside Mr. Fantastic. There they found the architects of their troubles, Selene and her ally Blackheart, who began draining the souls of everyone in attendance. The pair resisted, protecting the other guests until Margali could teleport in with the rest of the Four.

When Margali and the Invisible Woman were devoured by Blackheart, Mechamage flew into him to save them. She also found Daimon Hellstrom held prisoner therein.

Freeing them all, Mechamage held Blackheart back while Margali and Daimon formed a plan. The idea was to use the Four as avatars of the elements they represented, with Mechamage as the conduit for using their energies to attack Blackheart. The plan succeeded, and Blackheart and Selene were entombed.

Following this, Mechamage joined with Daimon Hellstrom, Margali Szardos, and the recovering Alyssa Moy. They formed the Shadow Hunters, hunting down mystical threats.

Mechamage was next seen amongst a number of sorcerers trying to remove Ego from Earth when it was transformed into a prison planet.

Courteous and friendly, Mechamage is capable of keeping her cool in trying circumstances. But she’s aware that she’s still new at this, and is constantly second-guessing herself. She seems to underestimate her abilites, but never backs down against even the most powerful threats.

A private person, she’s protective of her identity.

“Not hardly, ma’am. Ya all might consider me the cavalry… though I ’pologize for bein’ a mite late. Took longer ’n I expected to wiggle through the defensive wards that protect this prison. I’m here to help. Y’all can call me Mechamage !”

Mr. Fantastic [Examining the Sor-Circuitry Armour]: “Most impressive — your components are all ’off the shelf‘. The circuitry boards were subsequently customized, I assume by you. This is really magnificent work. I wish my own was half so elegant.”
Mechamage: “Th-thank you, sir.”

“I’m scanning power manifestations like I ain’t never seen before !”

The group named themselves the Shadowpact rather than the Shadow Hunters. But they didn’t last long, their fate reputedly as tragic as previous groups to have taken that name, and Mechamage hasn’t been seen since.

It’s implied that Mechamage is responsible for building the armour she wears, although it isn’t clearly stated or shown. I’ve assumed she did. 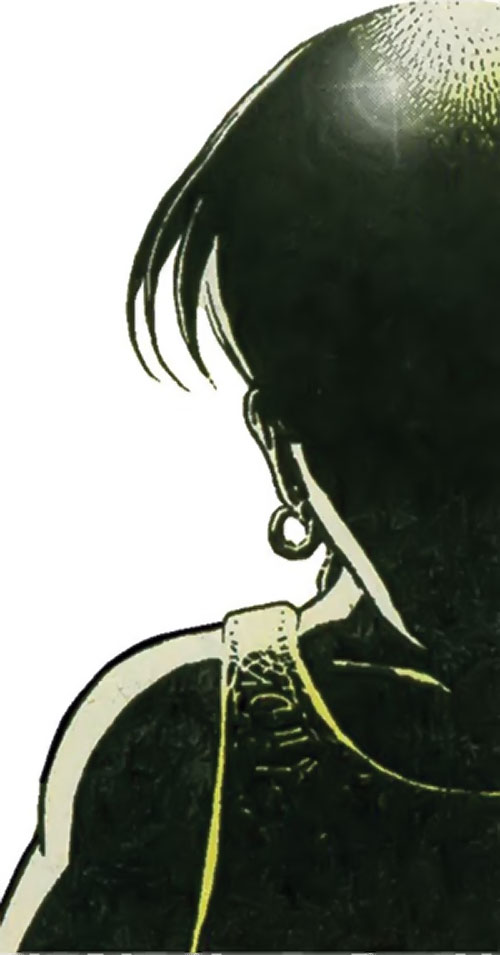 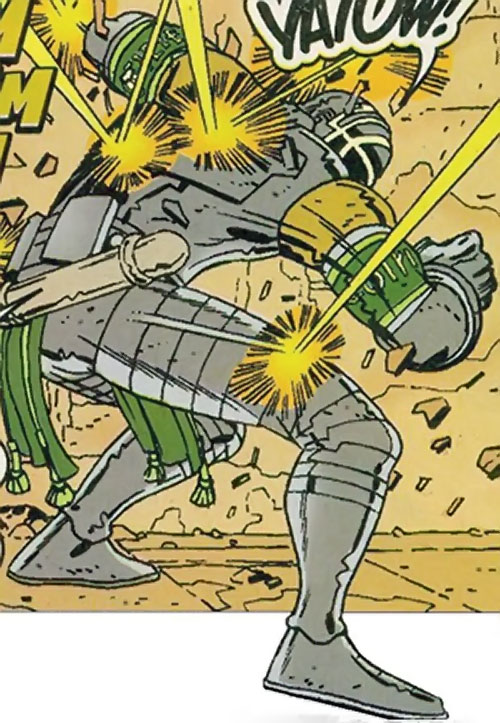 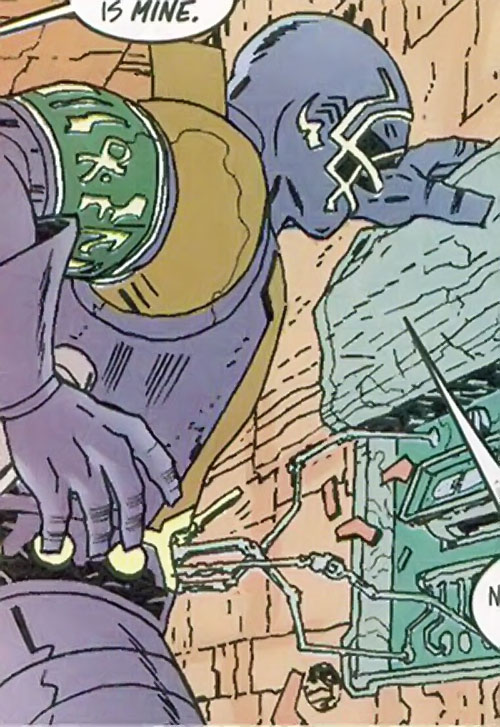