The Mecho-Assassin is an incredible unarmed fighter, able to threaten Captain America (Steve Rogers) himself. It is superhumanly fast, strong and resilient. Despite its size, it can move swiftly and stealthily so as to reach a good firing position.

Its weapon is a rifle-sized cannon firing a high-explosive shell that can devastate a large room. Even Captain America’s shield offered little protection from the blast, since the explosion was too large.

As a self-defense measure, the android has a flash-pack hidden in its brow. It can unexpectedly blind people right in front of it.

The Mecho-Assassin proved remarkably effective against Cap while it had the initiative. In DC Heroes terms, it has a surprising stock of Hero Points  which it aggressively spent, keeping Cap against the ropes. Until it ran out and our hero gained the upper hand.

The Mecho-Assassin was an early A.I.M. weapon sent to kill Colonel Fury.

A dump truck piloted by Operator G-42 dropped the deadly robot near a certain Manhattan barber shop, and the Mecho-Assassin blew it up. Captain America intervened, but even he had difficulty taking the robot down.

Defeated, the Mecho-Assassin self-destroyed by turning to dust. 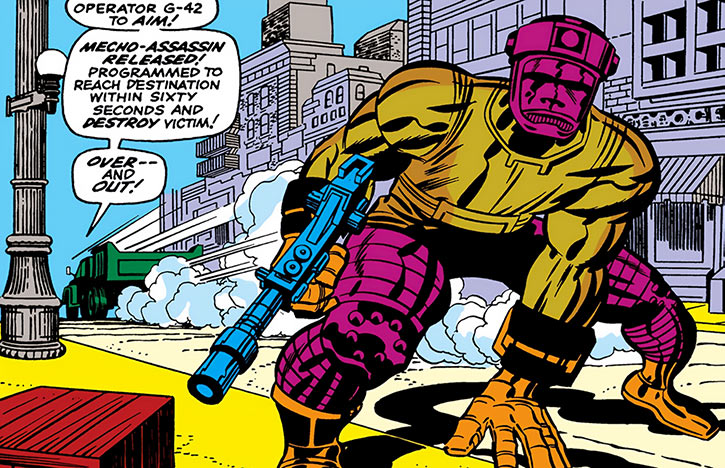 However, the nefarious organisation of yellow-helmeted evil nerds had been deceived. Their intelligence about Fury’s location had been provided by S.H.I.E.L.D. infiltrator Agent 13 (Sharon Carter), and “Fury” was a LMD .

Despite its power, the Mecho-Assassin was never seen again.

The Mecho-Assassin has that classic Kirby android look.

Silent and highly determined. The Mecho-Assassin is all about its mission.

For instance it did not seek to kill Captain America, only to neutralize him long enough so it could check its kill.

Once certain Fury was dead, it then fought Cap as the nearest threat. It was presumably looking to get out of the operational area and vanish. 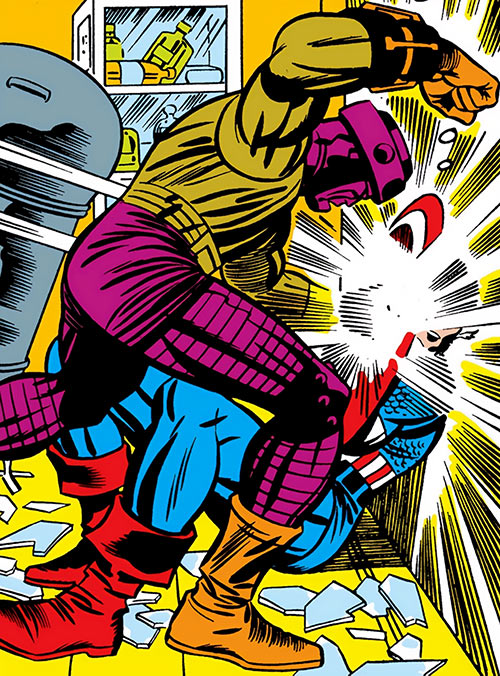