Of course the story is heavily dated. It was also a fairly short one, since the strip had 13 pages back then.

He can hypnotize people, taking control of their actions. He can also cause people to forget whatever he chooses.

After a number of men appear to have been robbed and afflicted with amnesia, the police are baffled. Meanwhile, Lois Lane claims that she will learn Superman’s true identity from Medini, the world’s greatest hypnotist.

Superman follows. Using his supersenses, he watches from afar as Medini hypnotizes Lois into thinking that a voice being broadcast from another room is really Superman’s voice. Superman stops the broadcast, making Medini suspicious. He hypnotizes Lois into forgetting about his own existence, just as Superman rushes in.

Medini uses his mental powers to paralyze Superman, followed by forcing Superman to kneel down.

As Medini walks off with the hypnotized Lois, Superman struggles against Medini’s power. Eventually, he fights off the power, but still has little control over his movements. Superman nonetheless manages to KO Medini’s thugs. But as struggles to regain control over his body, Medini takes Lois onto a transport plane carrying a big gold shipment.

Medini forces the plane to land near a large cave. After the plane is looted, Medini has one of his thugs pilot the plane back into the air in order to crash it (the thug will parachute out before it crashes).

Superman, having recovered, interrogates one of Medini’s goons to find out where Medini is now. Superman saves the plane as well as Lois who was still on board. Medini and his henchmen rush to deal with Superman, but Superman tosses the plane at them, leading to a huge explosion.

Medini’s fate is unspecified, but one might presume him to be dead. Or he might have survived somehow.

A brown-skinned enigma, Medini wears a yellow turban and a green suit over a yellow turtleneck as well as white gloves.

He’s a villain with a variety of unconnected plots. He thinks that his powers give him the right to take whatever he wants.

“Behold these cards— Now look into my eyes !”

Bonuses and Limitations:
After a victim recovers from being paralyzed by Mental Freeze, the victim is still not in control of himself; the victim’s DEX is reduced to 1 and when the character takes a movement action (walking, jumping, etc), he will not be in control over exactly where he moves, meaning he may run into trees or jump over buildings instead of on top of them.
To undo this effect, the victim must overcome the Mental Freeze power a second time, this time with a +2 bonus to the power’s OV/RV. This bonus may be negated by a significant change in atmospheric pressure (such as that created by significant changes in height).

If I had to assign a cost to Medini’s unique Bonus, here’s how I’d do it. First, the character has to buy Mental Freeze twice, once at the regular AP values, and once at APs high enough to put it two columns higher. Then, when the character attacks, he is basically performing a variation on a Poly-Attack.

He’d have to pay a little more (+2 FC?) to be able to use both Mental Freezes instead of powers that are actually different. Poly-Attacks already use the weaker of the two APs values to attack with. The victim is then effectively Frozen twice, once at RAPs value and once again at RAPs + 2 CS.

Since a regular Poly-Attack would only give you RAPs & RAPs, not RAPs & RAPS + 2CS, this would require another bonus, perhaps +3 FC.

However, the second attack doesn’t completely freeze the victim (-1 FC) and the +2 CS bonus can be neutralizes (-1 FC). 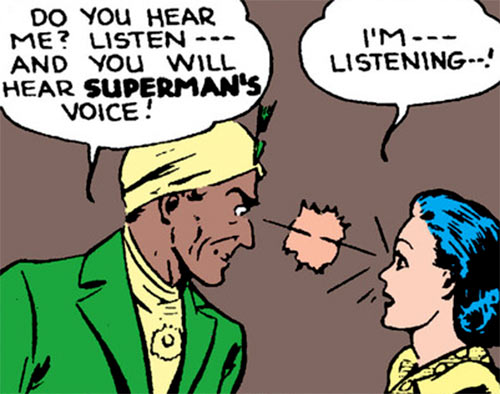