This strength-in-a-can enhancer appeared in a 2003 Nightwing storyline by Devin Grayson.

I don’t remember it being used further, which is… odd ? Especially in a game context, where large groups of opponents with some super-strength to them definitely are useful.

Mega-Flex is an anabolic compound with extraordinary effects. It somehow increases the muscle mass and muscle definition of the user over mere minutes, to the level of an experienced amateur body builder – or of a steroids user.

As can be suspected these are not normal muscle fibres. A Mega-Flex drinker will acquire visibly super-human strength. They will become able to destroy most ordinary objects with their bare hands.

A can of Mega-Flex seems to produce effects for maybe 60 to 90 minutes. This is difficult to say, since most cops using it were drinking caffeinated beverages all day long. If the drinker undergoes heavy exertion — such as fighting — a dose can run out within a few minutes, provided the person has not drunk it just before the fight.

Under the effect of Mega-Flex, users become aggressive, prone to physical violence, far likelier to kill in anger, and seem to have diminished attention to details. For instance they don’t seem to notice their altered mindset and musculature remarkable. They will escalate the least provocation — real or imagined — to assault and manhandling.

Medium-term Mega-Flex use promotes the development of muscle mass, at the cost of painful side-effects and kidney damage. research was underway to limit those.

Since the effects of the product are physically impossible, it may have an alien origin. It is possible that the compound is traceable all the way back to, say, Apokolips and the Religion of Crime.

“Mega-Flex” is a caffeinated, sugary soda sold in 33cl (11 oz) metal cans. The can is decorated in a way evocative of a both Coca Cola™ and an energy drink.

Mega-Flex is also an experimental serum designed to confer temporary super-strength. It was created by chemist Masao Takashi, who wanted to outshine his father – a chemist behind several popular and successful medications, most of which are actually placebos.

Dr. Masao developed his compound illegally, in a hidden lab. The first field tests were done on unwitting subjects. Hundreds if not thousands of cans were sold or given away to pubs, specifically targeting police bars in Blüdhaven.

Presumably Dr. Masao wanted subjects in decent health and with health insurance. But he also seemed to genuinely want to give the police an edge through transitory super-strength.

Dozens of cops — if not more — became addicted to Mega-Flex. This usually occurred when the coffee machine in their precinct house broke down and they needed a new source of caffeine.

Nightwing — then serving on the force as Richard Grayson — tracked Takashi down and told him to stop distributing the serum.

Thinking about how his father would react to the news, the doctor went postal. He drank a large gulp of his own serum and tried to kill Nightwing. But Nightwing was too agile, and all Dr. Masao managed was to wreck his own lab.

Dr. Masao was arrested by the BPD. The Mega-Flex compound was never seen again to my knowledge.

Can of Mega Flex

Mega Flex is a PL5 Device and cannot enhance any Ability past 5. 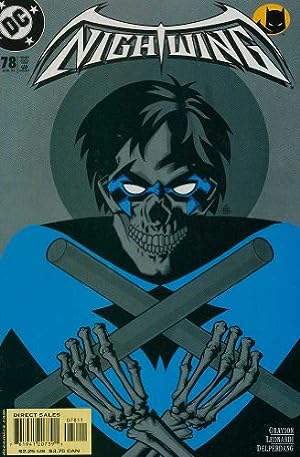