The feedback system is way too strong and can convey potentially lethal levels of pain. If the robot is somehow being manhandled the operator will involuntarily tense their muscles, like during an epileptic episode.

These muscle spasms of the operator will mimic the robot’s involuntary movements – for instance, when Megalith is knocked back or lifted in the air.

Jackdaw postulated that this feedback was the reason why the robot wasn’t deployed, which seems dubious. Issues with signal security seem more likely.

Megalith was a giant robot stored at Gamma Base. When the base was shut down in 1981 it was abandoned there. In 1982, mercenary spy Jackdaw (Heather O’Gara) infiltrated the base. She couldn’t resist trying Megalith through its remote control equipment.

However, the robot almost immediately ran into the Hulk. A misinterpreted reflexive gesture of Jackdaw triggered a fight. For a few seconds the spy thought that the immense strength of her robot would allow her to dominate the Hulk, but the jade giant swiftly rallied and demolished Megalith.

The resultant feedback inflicted terrible pain to Jackdaw, though she managed to fly out of Gamma base undetected.

Megalith is armoured with ceramic plates, giving it a stone-like appearance. 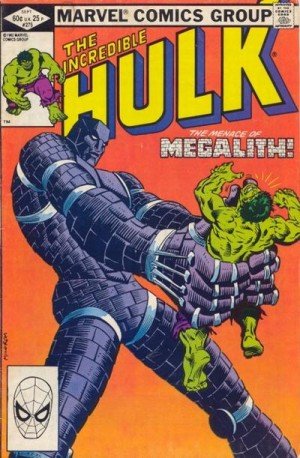