Megatak first appeared in a 1983 Thor issue. He’s themed after the video games of that time.

1983 is a key date in vidjagames history.

So, as often, the comics’ use of emerging stuff in society was late to the party.

Megatak is contemporary with Video-Man (Francis Byte). He also comes a year after the Commander Video plot of General Electric.

But most importantly, it comes months after landmark movie TRON. Which did a striking, perhaps definitive job of expressing the atmosphere of early 1980s games.

Blow into the cartridge

One of Megatak’s powers is to summon video game enemies to fight at his side.

And aaaaas it happens, writeups.org has short profiles for a number of classic video game critters. Such as those in DooM, in Quake or in HλLF-LIFE.

So if you want to use such critters in a super-hero game, Megatak’s your friend. 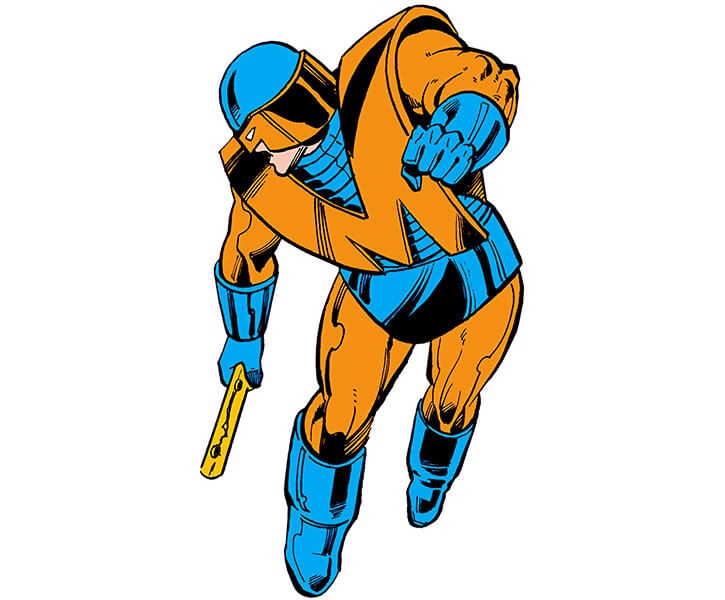 When he became Megatak, Mr. Nettles was turned into a hulking brute.

This form is superhumanly strong, to an unclear degree. The one punch he throws *seems* to stagger (but not hurt) Thor (Thor Odinson). It’s ambiguous.

His physiology cannot be human. But his nature and properties are unclear. Still, it took “enough power to melt a city” to electrocute him.

He could also fly… but see below.

Nettles was an experienced industrial spy, and seemed to have a background in electronics. For instance, he could assess the sophistication of then-contemporary circuit boards just by looking at them. 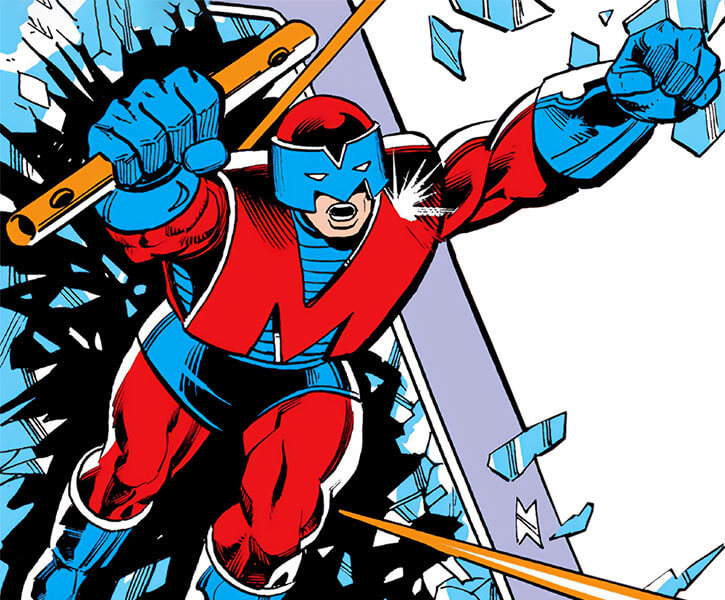 The solid “electronic energy” cannot be used if summons are present. He needs to reabsorb the energy of these creatures into himself first.

Originally, he wielded a power rod which shot energy blasts. This was seemingly lost after his death. Since Megatak hasn’t flown since losing this rod, it seems likely that it was what let him soar.

It is certainly possible that he has other powers channelling other vintage video games. I’d offer ideas but this profile is getting long.

(I’d start with the bombs and hyperjump from Defender.)

For atmosphere. Though you… don’t necessarily want to leave it playing as you read.

In 1983, industrial spy Gregory Nettles was at a consumer electronics show in New York City. This was his last chance to steal the chipset for the revolutionary game Megatak before its release.

Although video games were a young industry, Pac Man had already made $3 billion in the previous year. And Megatak’s revolutionary technology promised to dwarf even that.

Nettles paid the costumed mascot guy to leave and give him his costume. Now disguised as the Megatak character, he could slip behind the giant screen to steal the chips.

However, as he did the demo was launched. Nettles was electrocuted – then disintegrated and sucked into the machine !

Nettles came back from his TRON-like ordeal minutes later. He now was completely mad and possessed with great electronic power.

The goddess Sif defended onlookers against Megatak’s 8-bit creations. She held the line until Thor arrived.

(“8-bit” is popularly associated with third-gen consoles. But the Atari 2600 already had a 8-bit CPU, so that never quite made sense.)

The thunder god was initially surprised by Megatak’s abilities. But he soon recovered. Absorbing the electricity from the entire convention, Thor floored Megatak with one bolt.

The Odinson then drained all electricity away from Megatak and into his hammer. This saved Gregory Nettles from electrocution, but also removed all his powers.

Two years later, Nettles — in his Megatak costume — attempted to make his return. And perhaps have his revenge.

My sense is that he no longer had powers, but his rod still had its blasting and flying capabilities.

However, he was murdered by a Scourge of the Underworld. 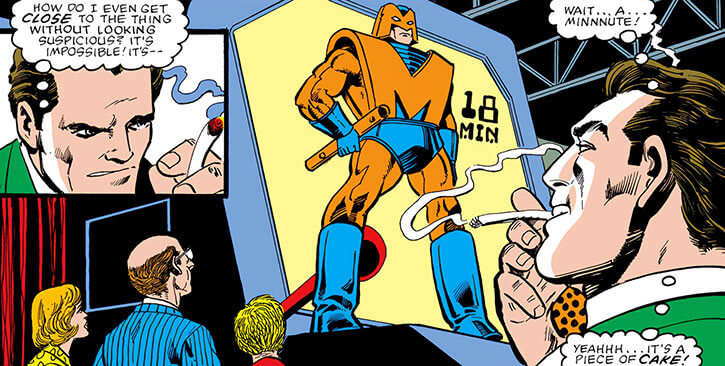 In 2009, Megatak was among the “deadly dozen” of criminals resurrected by the Hood (Parker Robbins), using Dormammu magic. Robbins enlisted them in his mob, and tasked them with killing the Punisher (Frank Castle).

By this point, Megatak’s abilities and nature seemed a bit different. He likely was among those resurrectees who now had demonic powers.

It may be that his abilities are now a techno-magical version of his old powers. Perhaps derived from a place of electronic demons, such as Twitter  .

Megatak primarily associated with master hacker Microchip. Microchip was fascinated by his nature – and his computing power.

Together, they located the Punisher anew. Microchip then specifically sent Megatak to kill Henry Russo, who had succeeded Microchip as the Punisher’s tech guy. However, Russo narrowly survived his wounds and fled.

Megatak teleported in his colleague the Blue Streak (Don Thomas), to chase Russo.

He wasn’t seen with Hood’s crew after that. It is possible that he was specifically partnered off-panelNot directly shown in the comic. Off-screen. with Microchip. But Microchip was later killed by the Punisher.

After the fall of the Hood, Megatak was among the Deadly Dozen resurrectees who came to work for the Crime-Master (Bennett Brant). His colleagues were Death Adder (Roland Burroughs) and the Fly (Richard Deacon).

They were joined by Jack O’Lantern VI, then Toxin (Eddie Brock).

Megatak engaged Agent Venom solo. He was dominating the fight. But Toxin came in, suddenly seized Megatak from behind and bit his head off. That was so that Brock would get to kill Thompson. 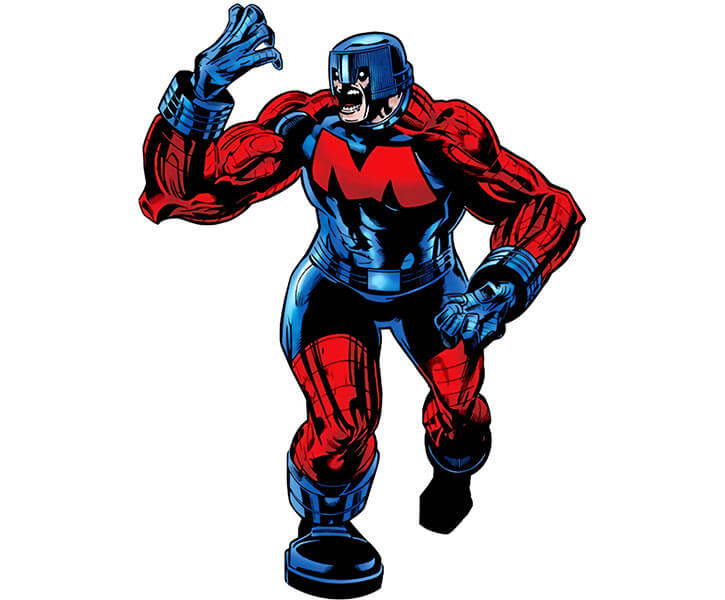 Post-resurrection, Megatak seemed larger, but it’s not quite consistent from panel to panel. Maybe 6’7″ (2 metres) ?

Also post-resurrection, Megatak’s speech had frequent, random spurts of binary code in it.

Nettles seemed completely unhinged by his experience. He apparently considered that he was now the game.

That means he considered other video game characters to be his brothers. As the best and most hi-tech game, he should be their rightful king and take power.

The huge marketing blitz around the Megatak game also got to his head. As the incarnation of the Megatak game, he considered himself the pinnacle of electronic power, the most formidable arcade assault, an unstoppable technology taking the world by storm.

After his resurrection, his behaviour was different. My impression is that he now longer considered himself to be the game, but Megatak’s playable character. Presumably also called Megatak.

Now, 1983 games weren’t exactly deep on characterisation. So he seems to be some sort of generic overbearing future soldier, or militarised police. There’s a vague Judge Dredd vibe. He didn’t speak much.

Writer notes in the back of a Punisher issue state that he is highly intelligent, but has little drive on his own due to being emotionless. His electro-kinetic abilities have taken over him, leaving no humanity — and little trace of Gregory Nettles — within Megatak.

On two occasions, he suddenly launched into a diatribeForceful and bitter verbal attack. Rant.. About being the herald of a new computer reality that would overwrite the current one. That might be a hint about where his restored, post-mortem power comes from. 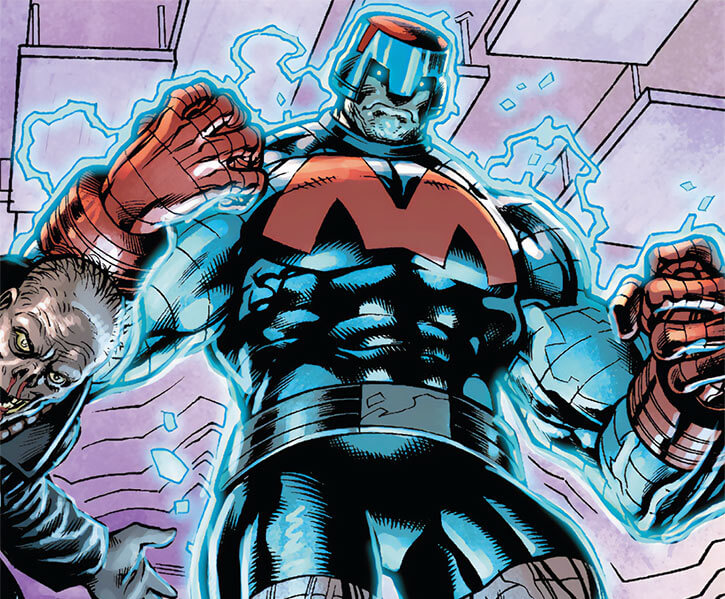 “I am electronic energy personified… and I command my brothers !”

“What ? Who is this – daring to attack my phosphor armada ?! I cannot permit it ! I am the revolutionary new program of total electronic assault ! The female must be stopped – by Megatak himself !”

“And now, Thor — now you shall face the entire force of Megatak’s armada — coalesced and focused into a single unconquerable WARRIOR OF THE FUTURE !” (goes FSHOOM !! with Force Manipulation)

“You face the power of actualized programming. The binary language of the cosmos collected, made real.”

“Surrender yourself to the fury of new reality ! There is no escaping — humanity is completely surrounded by new reality ! Flesh is weak. Flesh is afraid. But the code is clean. The code is merciful.”

(This section proposes ways of using this character in stories set in the DC universe).

He might have died during a 1980s Suicide Squad mission. This used to be one of our go-to hypotheses for this section, but we have barely used it in the last 12 years or so. So let’s dust it off.

Megatak then returned as a Black Lantern, except he seemed to somehow absorb part of the power ring into his computerised mind. Then broke free and left.

Some sort of demon with computer magic and an unknown relationship with Nekron (no, not that one) likely is to blame.

No man escapes the Manhunters

Perhaps there exists an undead Manhunter android somewhere in a hell dimension. Who became a sort of digital infernal lord and is trying to invade the DC Universe. 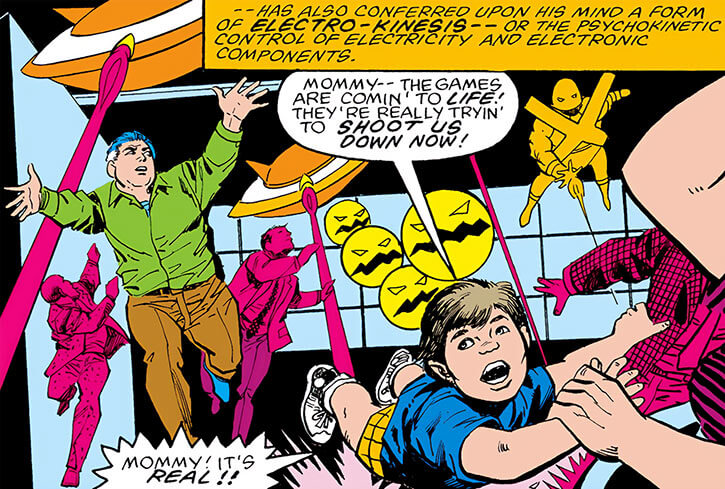 All Skills are Powered.

None in this state.

Stats are speculative, given the low amount of material.

STR is a thorny one. My sense is a 10, in that I don’t see Spider-Man (Peter Parker) punching Thor with that much effect. So, one AP more than Spidey.

But it’s also a good STR score for after his resurrection. He could hit Agent Venom hard, but Henry Russo could still survive being stomped once. And I want an AP of Growth to mark the difference. So, heh, 09 after all.

*Technically* he has a very limited form of Force Manipulation. So limited that writing it up as Mental Blast is clearer.

I’m assuming that most of his Hero Points during the Thor fight went into the Mental Blast attack – AV and (especially) EV.

Animate Image is a relatively compact, intuitive solution. But I’m not a huge fan of the AP pool Powers. Like the character creation system, it is trivial to abuse.

The amount of APs is also deceptive – 20 sounds huge, but once assigned across three Physical Attributes and a Power or two…

Normally I’d go for a Pet approach to provide specific numbers. But since there are multiple Limitations, it would look too clunky.

In 1983 he produced evil Pac Mans (Pac Men ?) with a laser cannon in their mouth, and knockoff Space Invaders or Galaxians. DEX 03 STR 04 BODY 06 Flight: 03 Energy blast: 04 are reasonable values for those 8-bit menaces.

All Skills are Powered.

Removed the Powers he didn’t demonstrate during this era, if only for clarity. But he might still have them.

If you decide he can still summon video game enemies — which is the right and proper approach — you can simplify with a Dimension Travel (Summoning) approach, then simply using the stats for those mobsVideo game slang for a generic enemy.

You could simplify Force Wall and Mental Blast as Force Manipulation: 12, limited to simple and themed objects. That’s extrapolating from the material, but if you wanna lean into the constructs aspect rather than the supercomputer aspect…

Throwing a punch through a cellphone’s screen likely gets Blindside Attack bonus. I say “likely” since we don’t have numbers for Agent Venom, to verify this.

Jamming and tracing comms is assumed to be done with Scientist (Computers). Comic book characters hack phones to do that all the time, and Megatak has enough Superspeed for those Tasks to make it look like a Power.