His globe is indestructible and he can use telekinesis to fly it around. Apparently it does not create a sealed environment as he can still be knocked unconscious by gases.

Meglaro was an “evil alien”. He threatened 30th century Earth when he found or devised a way to develop formidable super-powers. Though his body was shriveled and he was confined to a indestructible globe for life-support, the liquid he was suspended in had given him telepathic and telekinetic powers.

He used his powers of mind-control and disintegration to attempt conquest. However, a delayed effect of the liquid unexpectedly placed him in a deep coma-like sleep.

The authorities took him into custody but were not able to get him out of the globe. When he showed signs of stirring, it was decided to exile him through the time barrier. He would be sent into the far future, after life on Earth died out, where Meglaro could threaten no one.

He was temporarily rescued by a gang of space pirates. But the Legion of Super-Heroes lured the gang, with Meglaro, to the planet Umrax. There, the atmosphere knocked the pirates unconscious.

Superboy then apprehended the pirates and carried Meglaro through the time barrier to the year 100,000,000 A.D., as the Legion had originally planned, and left him there.

He has never returned.

Meglaro is a rougly humanoid alien with yellow skin, a tiny, shriveled body, and a giant-sized and very bald head with huge eyes.

He sits in a clear, liquid-filled globe which is about 3-3.5 feet in diameter.

Meglaro was a stereotypical arrogant and gloating villain in his one chronicled encounter. He was apparently grateful for his rescue as he seemed to be cooperating willingly with the pirates.

“Release me ! I, Meglaro, command you to release me !”

Meglaro is very similar to the Brain Globes of Rambat. These appeared in Adventure Comics #293, just ten months before Meglaro appeared. Perhaps he came across a surviving globe and performed experiments on it which resulted in his own powers.

His exile into the distant future is similar to that of Vorm of the Space Pirate Pack, alias Dynamo Boy. Perhaps they might encounter one another and work out a way to return to the 30th century. However, Vorm is at the “end of time” and Meglaro is “only” in the year 100,000,000 A.D.

Perhaps the Time Trapper, in his citadel at the end of time, will be attracted to these time-lost Legion foes and recruit them as agents.

The gang of criminals that aided Meglaro might have ties to Vorm’s Space Pirate Pack. Or to the Cosmic Spy League run by Molock the Merciless, brother to Starfinger I.

I deduce Telekinesis from his levitating bubble and from his disintegration ability. And the fact that without it he’d be unable to interact with the world. I infer the Power Loss from the fact that he willingly lives inside a bubble. 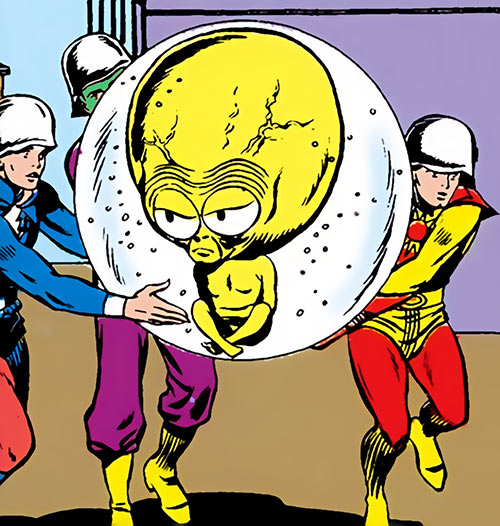 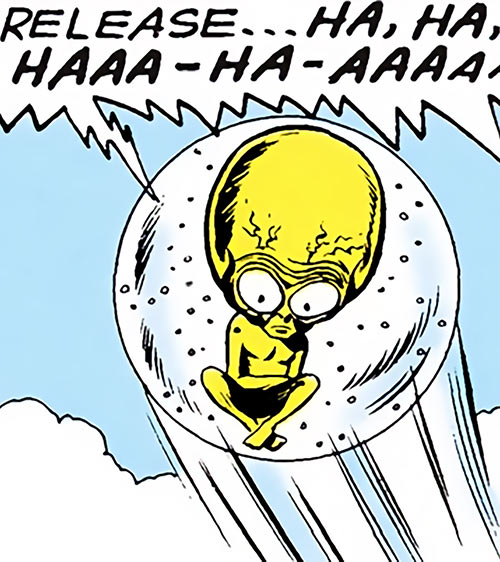