She’s fluent in English, which was rare back then, and might know other languages.

She was trained to operate various vehicles built by the Mandarin.

Mei Ling was betrothed to the Mandarin when she was but a child.

She likely comes from a wealthy, traditionalist family. If so, one imagines that they fled to Taiwan when Mei Ling was but a toddler and the Long March  came to an end.

During the second half of the 1960s she came to live with the Mandarin. Mei Ling presumably moved to the foreboding Palace of Star Dragons, in the Valley of Spirits.

Mei Ling is the most likely mother of Temujin, the son of the Mandarin. However, this remains an hypothesis.

Temujin was apparently taken away as an infant to be raised by warrior monks.

She participated to several plots of the Mandarin, usually doing light surveillance and interaction work.

One involved using a Hulk-like android to capture Janice Cord, Tony Stark’s paramour. Though the android was destroyed, Mei Ling and the Mandarin learned that Iron Man was Tony Stark.

In 1969, Mei Ling lured Stark to an antique shop she was supposedly running in the US. The shop was full of traps and robots, and Iron Man was captured.

The prisoner played for time, luring the Mandarin away and trying to turn Mei Ling against her husband. The angry Mei Ling stormed out of the room rather than listen to the captive Stark. Her slamming the door helped Stark escape.

The Mandarin fought Iron Man again and captured Janice Cord anew. Mei Ling flew an aircraft in to evacuate her husband, but Iron Man managed to board it in mid-air. Watching the Mandarin threaten to kill Janice Cord, Mei Ling reluctantly admitted that he was insane and cruel, and would never love her. Despondent, she bodyblocked Cord out of the line of fire and saved her life.

Seconds later, Mei Ling was killed by an accidental discharge from the Mandarin’s rings.

Mei Ling was raised as a traditional wealthy wife. As such, she’s extremely deferential toward her husband and confident in the superiority of her culture above the decadent West.

She has typical 1960s comic-book-Asian dialogue. For instance she calls most everybody “(adjective) one”.

She was in love with the image she had developed of the Mandarin while she was a teenager – not with the actual person with his foibles.

Mei Ling was a romantic and looked forward being made queen of the world by her husband. Yet, she didn’t like his schemes and thought they were morally wrong.

She admired Janice Cord’s love for Stark, and was revolted by how her husband treated Cord.

“I believe this magazine clipping may provide the final piece of information you require, masterful one !”

“Yes, my master ! I shall depart immediately !”

“Your crude attempt at flattery is wasted on Mei Ling ! Since but a child I’ve been betrothed to the Mandarin… my place and devotion must ever be with him !”

“There was truth in Iron Man’s taunting ! If the master can treat the Western girl this way now, why not me in the future if it suits his needs ?”

Skills:
Vehicles (Anything built by the Mandarin): 02

Drawbacks:
SIA toward Romanticism, Misc.: Mei Ling has been betrothed to the Mandarin since she was a small kid. 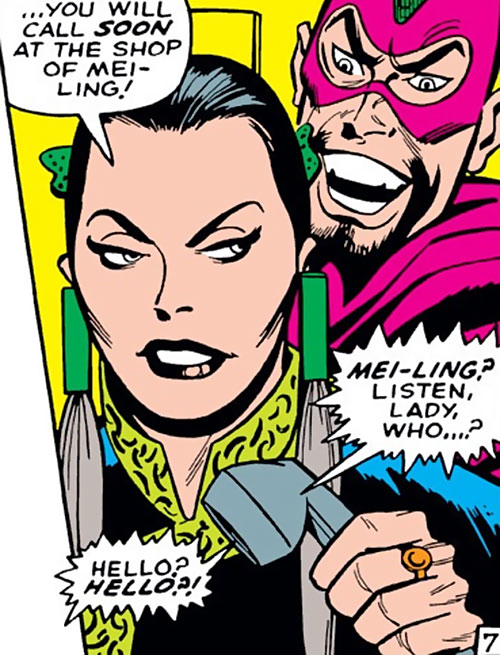 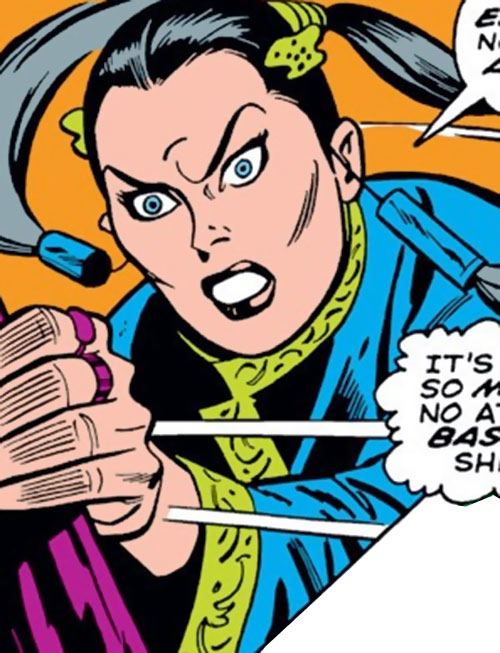