Born with the physical power of a Slayer, Fray has demonstrated enhanced reflexes, strength, endurance and recuperative powers. She is an expert brawler, and highly skilled with both her Slayer Scythe and her Blaster pistol.

Unlike previous Slayers, however, she has no memories of former Slayers lives. The psychic bond between the Slayers was instead imparted to her twin brother Harth, leaving Melaka as half a Slayer.

Melaka wields the Scythe. This is a weapon magically crafted for the use of the Slayer. It is very effective in killing, when used by a Slayer. Melaka also carries her Blaster, or Stungun. It fires bolts of electricity which may be used to stun or blind an opponent.

In a world far in the future, demons have been eradicated and removed from that plane of existence. With no demons, there have been no Slayers. The only remaining demons are vampires, known as Lurks. And of these, only a few understand their true origins, and purpose. Even less fully comprehend their powers.

With the re-emergence of these vampires, and their gathering together, a new Slayer was born. However, she was born a twin. Whilst Melaka inherited all the physical attributes of the Slayer, her twin brother Harth gained all the mental and psychic abilities.

As such, as Fray grew, she had no understanding of where her physical skills came from, and what they were for. Harth kept quiet about his recurring dreams of girls from history.

Lord of the Lurks

Melaka Fray used her abilities as a Runner, or Grabber, engaging in theft for various criminal elements of the community. With her skills, Fray was the best. On one job, Melaka took her brother Harth along, but on completion they encountered a Lurk. It beat Melaka, throwing her from the roof of a building. The Lurl then proceeded to feed on Harth.

Harth, however, having an understanding of vampires from his dreams, bit into the Lurk, drinking in his blood, thus turning himself into one, under the belief it would save his life. What it actually did was give the Lurks a leader. Harth understood what vampire and Lurks were, and had a full comprehension of their mystic abilities.

Fray, believing her brother dead, continued her career as a criminal. Meanwhile, her elder sister joined the police department.

A Slayer after all

A while later, Fray was approached by a large demon, Urkonn, who showed her her heritage as a Slayer. Fray beat back a vampire assault on Haddyn, led by her twin, and has proven herself a worthy Slayer.

She has recently found an old Watchers library, and has started to learn even more about herself.

The body of an athletic teen girl, attractive without being beautiful. She has a scar starting on her top lip, extending to her left cheek, a nose piercing, and her ears also have several rings in each. Fray also has an unusual tattoo on her upper left arm.

As most Slayers tend to be, Fray is highly independent and capable. Before discovering her true heritage she was a mostly selfish person, although very fierce in defending those she cared for. After discovering her origins, she has evolved into a protector of all people. As most Joss Whedon characters, Fray has a highly developed sense of sarcasm.

Melaka Fray has always blamed herself for the “death” of her twin brother at the hands of the Lurks. She has since discovered the truth of her brother’s “death”, although this has not eased her guilt in any way.

“I’ve met you ten thousand times. I’ve killed you a hundred ways… in a rage, cool as ice, giggling like a schoolgirl…”

“I don’t think the Slayer’s supposed to have a twin and he got… the memories, the heritage… I just got the strength.”

Have not got a bloody clue. Need some help with this one… not really sure if she will fit with the Legion, but I haven’t read it in years. Any ideas ??

Drawbacks:
Guilt (over Harth, her twin brother). At the beginning of the limited series, she also had the Mistrust drawback, and suffered Traumatic Flashbacks when facing a Lurk. Loo could also have been considered a Dependant. She had lost these by the end of the series. 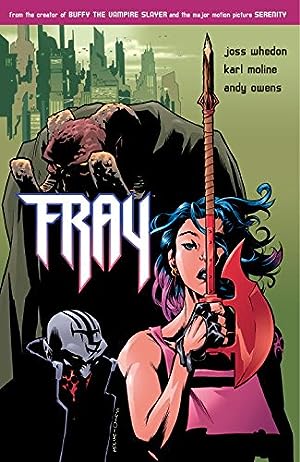 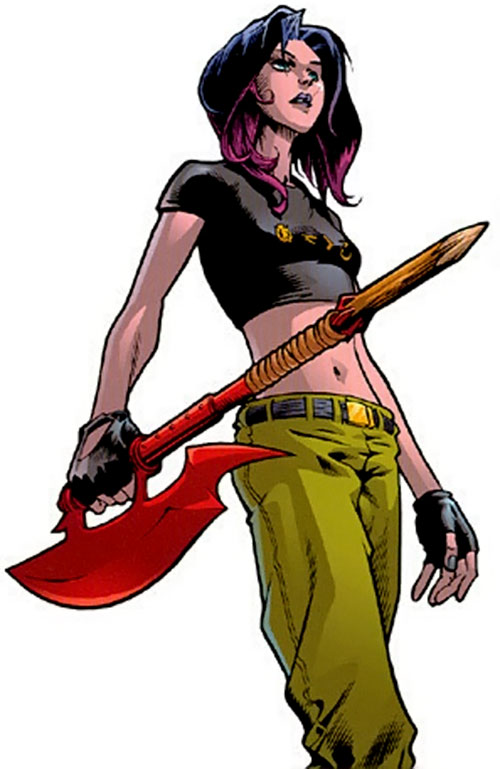 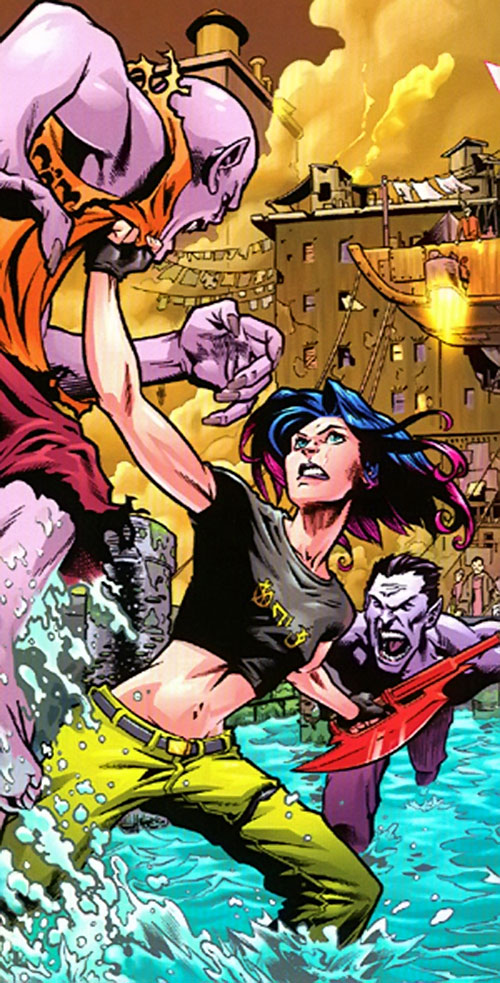