Seamus Mellecamp (sometimes spelled Melloncamp) is a minor enemy of the X-Men, who first appeared in 1993.

He is part of the Acolytes of Magneto, a gang of mostly low-definition minor superhuman mutants. These characters are quite useful for mutant-centric RPG campaigns in the Marvel Universe.

Mellencamp is said to have an indestructible body and reptilian traits. The definition of “indestructible” is problematic, since he seems to be quite hurt when Daniel Rand punches him without using the Iron Fist. The least awkward way to solve this is to decide that he’s invulnerable in the sense that he can recover from any wound.

Secondary sources  also credit him with super-strength, agility, endurance and super-dense skin. While this is not evident in his appearances, I’ve added them to a low level to our game stats to acknowledge this. There’s too little data for a firmer stance.

Mellencamp was part of the recruits among the Acolytes that were first seen when Cortez established the Acolyte’s bases on the French coast. When said monastery was assaulted by the X-Men, he guarded their hostage, Dr. Moira McTaggert. He ambushed Jean Grey as she rescued Moira, but she delivered an exceptional telekinetic push that sent him flying beyond the horizon.

Some time later, Mallencamp was part of a strike force of Acolytes which assaulted an Army base – Camp Hayden, Kentucky. They had learned that he base secretly held a reserve arsenal of Sentinel robots, which they hoped to either destroy or steal while they were offline.

There they clashed with X-Factor, who had learned of the impending assault. During the battle, Mellencamp slaughtered several Madrox dupes and blinded another. This forced Madrox to create a dupe within Mellencamp’s body, exploding him.

Mellencamp returned while Exodus was the master of the Acolytes. It is possible Exodus used his formidable psionic  power to perform the resurrection, which he claimed was within his power. But it seems more likely that Mellencamp has the regenerate-from-anything power we postulated above.

As part of Exodus’ group of Acolytes, he was deployed in the assault on the High Evolutionary’s fortress, in an attempt to steal Isotope E.

Following the return of the Master of Magnetism, Mellencamp was a part of a series of terrorist operations Magneto had the Acolytes launch. These targeted genetics research labs among other objectives.

From the pole to Genosha

Later, he was part of the crew of Acolytes on the polar Ellesmere Island which attempted to prevent the X-Men from leaving the frigid island, where they had crashed their airplane.

They were telepathically manipulated into attacking the X-Men, who defeated them and stole the Acolytes’ airplane. Mellencamp was taken out when Piotr Rasputin, who was fighting in human form, turn to metal while Mellencamp was holding him. This instantly created a large lightning bolt from all the static electricity in the air.

Mellencamp was still with the Acolytes when Magneto was granted rulership over Genosha, and joined him there. By the time the Carrion Cove rebellion started, though, he did not seem to be in either camp. Why he apparently left Genosha is unrevealed.

Jean Grey noted a coincidental resemblance between Mellencamp and Mephisto.

A mutant supremacist bully, and a fairly typical Acolyte. He’s more violent, vicious, sadistic and bitter than the average, likely because of his appearance.

“Height o’ rudeness — height o’ ! First you crash the party — crashed it ! Then you try to scooter off with the host o’ honor ?”

“Sorry, not all mutants are drop dead gorgeous. But my appearance fits my purpose — ’cause Seamus Melloncamp is your worst nightmare, babe.”

Some speculation due to low screen time and incoherences about his powers. 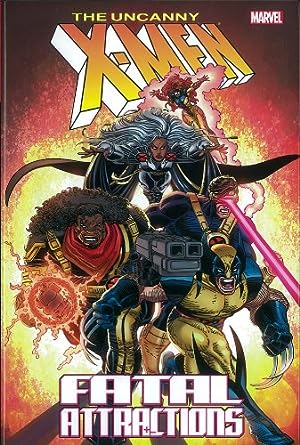 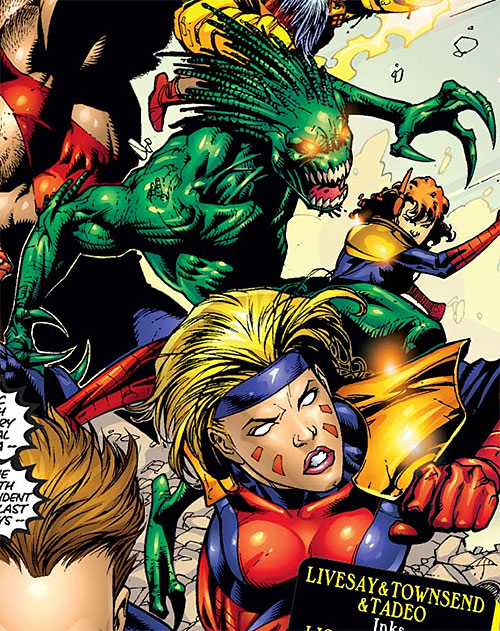 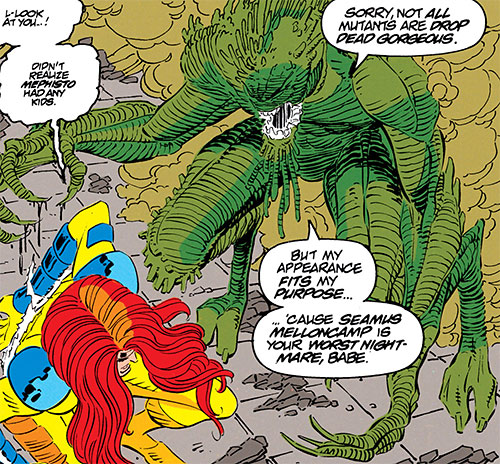