A trained security agent, Mellu is a capable armed and unarmed combatant. She’ll be armed with weaponry appropriate to her current mission.

The daughter of a council member and a scholar, Mellu joined the Security Services. She trained to act as a bodyguard for her father during his sojourns to Earth. She was mentored by Rac Shade, with whom she fell in love and got engaged.

She was distraught when it appeared Shade was a traitor, responsible for the crippling of her parents. Unbeknownst to her, the bomb was more likely because her mother was secretly the crime lord Sude, the Supreme Decider.

Enraged at Shade’s seeming betrayal, Mellu volunteered to become an N-Agent when he escaped during a prison break. She was anxious to be the one to execute him. She travelled to the ORC on Earth, from where she began hunting him and other fugitives.

She caught up to Shade as he was questioning someone called Kempo. This man claimed had proof of his innocence. Melu wouldn’t listen, and tried to kill him. But he escaped, leading some to suspect she’d let him go. Her failure saw her recalled to Meta and reassigned.

She ran into Shade back on Meta, when she found him leaning over the dead Captain Majan. He fled. Her investigations learnt of Majan’s ex-lover, the criminal Gola Zae, and Mellu decided she must be the link with Shade. Hunting down Gola, Mellu was captured and knocked out.

Mellu regain consciousness in hospital, under Dr. Sagan’s care, with no memory of what happened. Seeing Shade stop a hospital break by some prisoners, Mellu assumes he was responsible. She captured him, letting him be taken to prison.

Mellu was approached by Sergeant Barak, whom Shade had rescued from an ambush in the Zero-Zone. He revealed that Shade had rescued her from the Area of Madness. He had then gotten Dr. Sagan to use a machine to transfer her memories of the time there, which would have driven her insane, to Shade. Shade was the only person to have survived the experience unscathed.

Uncertain what to believe, she agreed to help Barak break Shade out of prison. When they got there, though, he’d already broken out. Furthermore, he was being abducted by Sude’s agents. They followed, infiltrated Sude’s base, and attacked, giving Shade time to break free.

They destroyed the Sude automaton, although the real Sude managed to escape. Mellu was left alone to take credit for the bust.

Her mother soon fell into a coma, for reasons unknown. Mellu devoted herself to learning the truth about Shade.

Investigating Majan’s murder, she learned of unusual energy readings in his room at the time. Loron traced them to the invisible assassin The Cloak. She and Barak captured The Cloak, and he admitted Sude had sent him to kill Majan.

Proving Shade innocent of that crime, if not his treason, Mellu was reunited with him just before he had to travel to Earth to deal with another criminal.

Emotional and fearless, Mellu can allow her feelings to control her. When she believed Shade responsible for her parents’ injuries she was determined to be the one to execute him, forcing her love for him down.

When she learned the truth she focussed all her energies on exonerating him.

“Shade — my teacher, my partner, and my ex-fiancé ! That traitor crippled my parents — and you think I’ll lack the courage to negate him if he’s found on Earth !?”

“Stop, Form ! I’m a Metan N-Agent ! Either agree to be neutralized and returned to Meta, or else face immediate negation !” 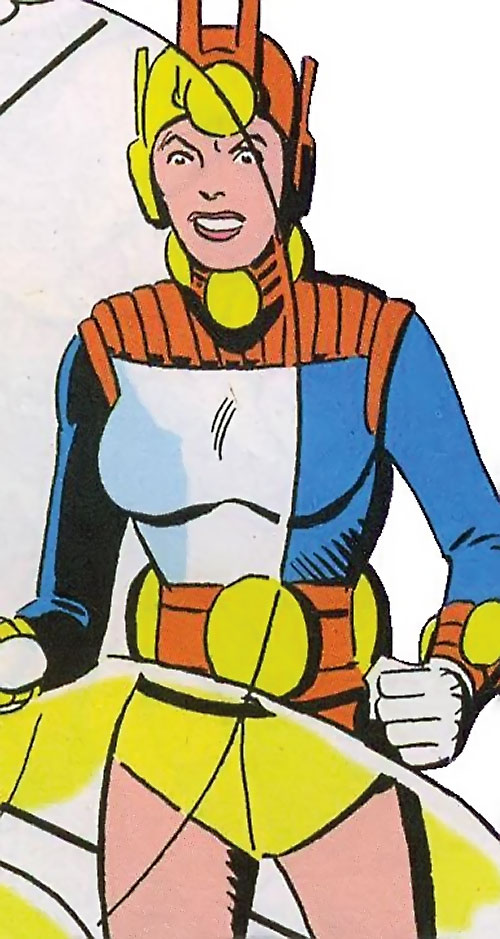