Meltdown has the ability to create psionic “timebombs” that explode with considerable force. Meltdown may delay detonation of a bomb for up to 10 minutes, but normally they detonate within less than a minute. The duration of the countdown is set when she creates the bomb. She usually throws them as weapons.

After she became Meltdown she learned to control them telekinetically, and to detonate them on mental command. She also apparently became able to reabsorb a bomb she decides not to use, after it has been ’set‘. However this may have been a bluff using a dud bomb, which she *can* do.

Recently she developed the ability to manifest a great number of them which swirl around her. These plasma streams affect everything in their path (in DC Heroes RPG terms, her area-of-effect energy blast).

Meltdown usually creates bombs with no more force than a regular grenade (in DC Heroes RPG terms, Bomb: 07). If she needs more force than that, will create multiple bombs.

She *can* create larger, more powerful bombs, but for some reason prefers not to. For instance she once created a bomb the size of a basketball which devastated a large area.

Born in an impoverished rural trailer park, Tabitha Smith ran away from home after the advent of her mutant powers.

Calling herself “Boom Boom”, she had a plethora of interesting experiences. These included coming face-to-face with the universe’s most powerful being, the Beyonder, having cross-dimensional experience with the “Fallen Angels”, and confronting a demonic invasion with the “X-Terminators”.

She wound up with the New Mutants just before they became X-Force, and has been with them ever since, as “Boomer.”

Coming to terms with her negative self-image after a devastating, humiliating defeat at the hands of Sabretooth, she reinvented herself as “Meltdown”. Meltdown was tough as nails and sharp as a tack, taking nothing from no one. In her first night out she defeated the immovable, invulnerable Blob, apparently by psyching him out (it was never revealed if she could make good on her threats).

She has had relationships with various men, including teammates Bobby “Sunspot” Da Costa and Sam “Cannonball” Guthrie, but currently walks alone.

All out of Wisdom

In their first mission, however, Wisdom was killed by the mad geneticist, Nilas Roman. X-Force continued to operate without him for many months, even faking their own deaths and acting as a pro-mutant terrorism group. They went as far as to kill groups and companies that abused and killed mutants.

After a disastrous encounter with Wisdom’s sister, Romany, X-Force broke up and went their separate ways. They still managed to get into a fight with the new media-friendly X-Force (Now X-Statix) over the team’s name.

Meltdown presumably joined the X-Corporation, along with the surviving members of her team.

Meltdown has gone to a black leather Matrix-inspired look. It is cut low in front, and with an open panel over the stomach. Her lower arms are bare, and she wears wrist-length leather gloves. Except for that, her suit resembles body armor.

She wears a long cloak over top that when she is standing still covers her from throat to toes, but when she is in motion, the panels swing away, leaving her exposed. She wears red “X” symbols on each sleeve.

Meltdown was a streetsmart kid, but was very vulnerable to the manipulation of others, especially men. She has had a number of abusive relationships, including with her father, and the mutant fagin the Vanisher. She hid behind a practical-joking mask and cracked wise, acting like the airhead everyone expected.

Then she was humiliated by Sabretooth, who pushed all the wrong pins and sent her over the edge. She got mad, and she’s stayed mad.

Meltdown is tough, strong, and doesn’t mind using her powers to get what she wants, up to and including lethal force. Her new MO doesn’t give in to anything, and even if she is scared won’t show it. She still has a soft spot for Cannonball, but that relationship has waned. They remain good friends in a bantering way.

It should be noted, that although Meltdown is a force for good due to a stubborn streak of altruism in her nature, she is not adverse to breaking *laws* if it serves a purpose. Breaking and entering to investigate a crime scene would be a typical example. She was a street kid and a thief for the Vanisher for a long time before joining X-Factor and then X-Force.

It was recently revealed that while a street-urchin, Meltdown killed a man who was trying to kill her and another girl. This was apparently the first manifestation of her time-bombs. She pays for this through altruism. Doing good to kids in her situation helps assuage the guilt she still feels.

“Not Boomer. Not Tabitha. The lady’s name is Meltdown. Gotta problem with that ?”

Skeletons in the closet

Meltdown’s Dark Secret is actually two dark secrets. The first is that she was abused as a child, which she keeps hidden for obvious reasons. The second is that she killed a man while she was a kid, apparently with the first manifestation of her bombs.

The second incident is the base of her Guilt – although the man nearly killed her and another street kid friend, she never forgave herself for that manslaughter. She is thus driven to perform good deeds to help people in bad situations that remind her of her past, using the HPs gained to cover her Guilt fee.

Though Meltdown has become a much more physical character, it’s really her mental attributes that have changed, and her tactics. For the street-waif “Boom-Boom” version, subtract 1 from Dex, Mental stats, and 2 from Mystical stats. She will only have the Bomb power, no Iron Nerves and only the Street Connections.

For the X-Force version, take 1 off Mental/Mystical stats, and give the contacts back. Post-X-Force #51 (her “Meltdown” phase), use stats as shown, except for the Energy Blast. For the new version, add the Energy Blast.

In her “Boomer” phase she made use of devices designed by cable that allowed her to launch her bombs with much greater force and accuracy. Since she developed her TK, the device is irrelevant, but it’s stats should be:
BOOMER’S WRIST LAUNCHERS [BODY 04, AV 06, Range: 03, Misc: The launchers make use of Boomer’s own powers to launch explosive projectiles] 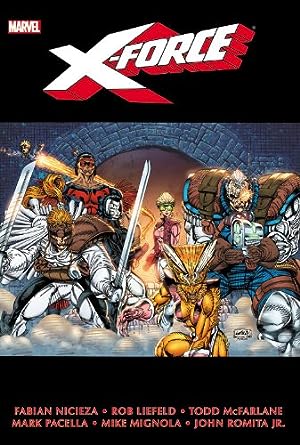 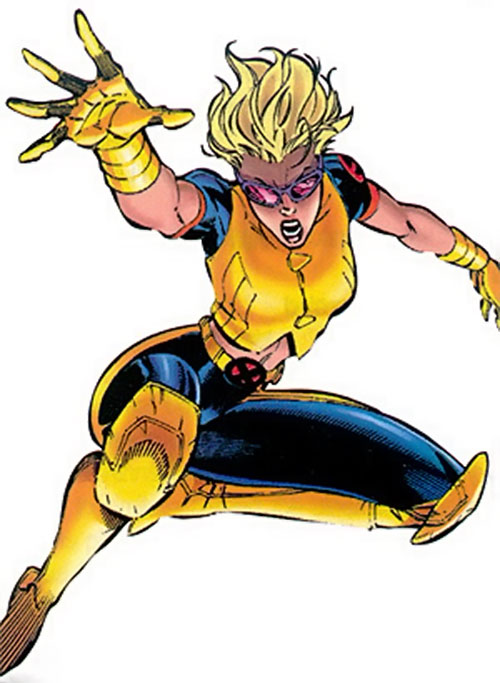