Horgan is fairly large and has some physical training – plus some superhuman combat experience. He has extensive engineering experience, and a good education in the hard sciences.

Horgan is otherwise fairly ordinary. He never was much of an impressive presence, or a particularly crafty operator.

His signature weapon is a ray that loosens the molecular bonds of specific substances. That turns solids into liquids within seconds. The first version affected iron (or rather, sufficiently ferrous materials). For instance one hit liquefied most of Iron Man’s left vambrace, but left the wearer’s arm inside unharmed.

In most versions this ray was mounted as a pectoral projector or over Horgan’s stomach. The beam is broad (like a searchlight) so aiming it isn’t a problem most of the time.

The Melter offhandedly mentions that his costume is armoured.But this was never clearly shown.

The cape in the early versions of the costume helped him keep his balance while running on narrow surfaces.

In 1976, the Melter wore a new capeless uniform, which had belt-mounted jets for flying.

The second version was improved by Baron Heinrich Zemo. It could affect all metals rather than just iron.

A jury-rigged, carbine-sized version with cables hooked into a backpack (presumably holding power packs). It had four settings – metal, stone, wood and flesh.

It was deployed along with a new model of helmet, with four or five studs above Horgan’s brow. These shot melting beams with a range under one metre, as a surprise self-defense weapon. The stud projectors are presumably fired through cybernetics in the helm. Only one is fired at a time but they’re quite accurate.

it was compacted to the size of a large pistol, without a big power pack. Furthermore, it could make the “melting” effect endothermic. In this mode the melting ray was effectively a heat ray making stuff melt.

From the 1970s onward, the “heat ray” approach was what was usually featured for the Melter, rather than molecular liquefaction.

It was mounted on the Melter’s abdomen. The beam had concussive force as well as being a heat ray, which suggests plasma.

It is likely that this version was developed with Justin Hammer’s staff.

If you want music to evoke 1963, the choice is easy. The Melter appeared back when Martha and the Vandellas’ Heat Wave was a big hit.

Bruno Horgan was an American industrialist in the defence industry.

In 1962 or 63, rival industrialist Anthony Stark proved that Horgan’s factories used substandard materials for the US Army’s tanks. Horgan lost this key contract, which bankrupted his company. He developed a raving hatred toward Stark and, to a lesser extent, the Army.

As his company was falling apart, Horgan saw that a defective inspection beam was melting iron. Inspecting the device in secret, he reverse-engineered it into a compact beam weapon.

Horgan became the Melter to feel powerful and feared. After all, he could now destroy the world’s most essential metal !

The man who could melt iron

Horgan used his ray to sabotage Star Industries tanks. Then he started slagging critical machinery at their production plants.

Iron Man (Tony Stark) intervened. But the Melter forced him to flee with one hit. The saboteur’s beam could easily reveal Stark’s identity by melting his helmet – or kill him by destroying his heart-regulating chestplate.

However, Stark soon came back with a suit made of extruded aluminium, and Horgan barely escaped.

In 1964, the Melter was recruited by Baron Heinrich Zemo as part of his maniacal scheme to kill Captain America for good.

Zemo’s Masters of Evil (the Melter, the Radioactive Man (Chen Lu) and the Black Knight (Nathan Garrett)) used sprays of Zemo’s Adhesive X to trap thousands of Manhattanites. But the Avengers captured the Masters.

Some months later, Zemo had his allies the Enchantress (Amora of Asgard) and the Executioner (Skurge of Asgard) free the Knight and the Melter from prison.The Masters then immediately engaged the Avengers. The Masters of Evil were again defeated. Zemo was accidentally killed while attacking Captain America.

The Melter was also part of the massive, Dr. Doom-engineered attack against Susan Storm and Reed Richards’ wedding. But this assault was undone by the accursed Richards.

Over a year, the Melter had his cellmate smuggle him parts from the machine shop. This allowed Horgan to build a crude melting gun.

After betraying his cellmate he escaped, got a spare costume out of hiding and promptly went after Stark. This time he forced the inventor to turn his cobbled-together melting gun into a more compact and powerful version.

It worked for a while. The Melter clearly had the upper hand when the police came in. But Stark had subtly sabotaged the weapon, and the Melter was again arrested.

Horgan was freed months later by the 1968 version of the Masters of Evil (Radioactive Man, Black Knight (Dane Whitman), Klaw, Whirlwind). These had been assembled by the Crimson Cowl (Ultron-5).

Though the Black Knight turned against them, the Masters stormed Avengers’ Mansion. The Melter narrowly took Hawkeye (Clint Barton) down by surprise.

However, Horgan failed to kill Jarvis, who warned the Black Knight in time to rescue the Avengers. The Masters were ultimately defeated, though Ultron escaped.

Klaw engineered an escape along with his accomplices. It worked, and the Masters minus Ultron were at large by 1970.

They attacked the annual Rutland, VT costumed parade to kidnap a famous scientist. But the Avengers were the guests of honour. Still, the Masters of Evil struck hard and stunned their opponents.

It was the unexpected arrival of the Liberators (Valkyrie, Black Widow, Medusa, Wasp, Scarlet Witch) that did them in. The Melter was flattened by the Wasp (Janet Pym).

Being a Master of Evil was Horgan’s high point as a super-villain. It only went downhill from there. 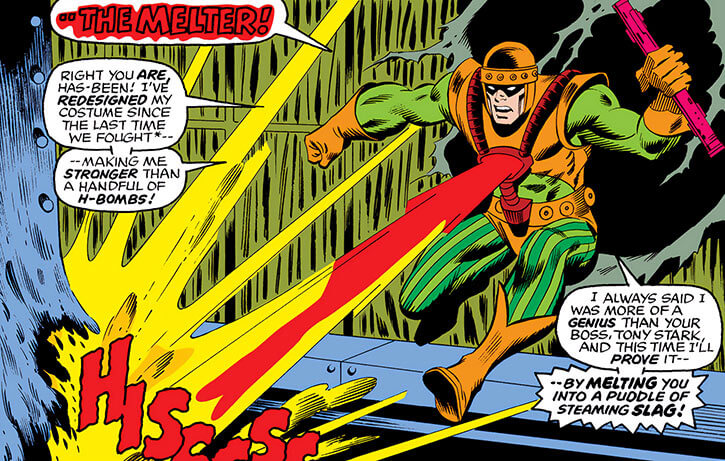 In 1975, he allied with Whiplash (Mark Scarlotti) and the Man-Bull (William Taurens). This Death Squad robbed a major comic book convention, but ran into Iron Man.

Furthermore, the Black Lama (King Jerald) intervened. He convinced the Death Squad and part of the public to attack Iron Man. Horgan shot Stark in the back, but a fan intervened and Iron Man prevailed. In anger, Horgan shot the Black Lama as Jerald was about to kill Iron Man. This forced the mysterious entity to teleport away.

It seems likely that Whiplash then introduced the Melter to Justin Hammer off-panel . In any case the Melter became a Hammer operative during the mid-1970s. Thus, when he returned he had a new costume and a new heat ray projector.

In 1976 the Melter stole a tactical nuclear device from the US military. He was promised a multi-million dollars ransom for it. Iron Man intervened, but the Melter struck first and landed a series of good shots. These apparently killed Iron Man.

Stark actually narrowly survived. He then sacrificed an old robotised Iron Man suit to distract Horgan. This plan worked, but Horgan was accidentally defenestrated and seemingly killed during the fight.

Horgan was also briefly summoned to the future by Arthur Zarrko the Tomorrow Man to fight the Fantastic Four of 1995. But he was soon returned to the second half of the 1970s.

At some point during the late 1970s, he was also “recruited” in Krona’s army during the JLA/Avengers events. He fought for Krona at the side of Heat-Wave (Mick Rory) from the DC Universe.

In 1979 the Melter associated with two other Justin Hammer men, Blizzard (Gregor Shapanka) and Whiplash. Together they attacked an Atlantic City casino, combining their weaponry to make short work of the massive titanium vault door.

Their common foe Iron Man attacked, but they turned the tables on him. Only bodyguard Bethany Cabe’s intervention saved the golden Avenger, who then defeated his foes.

The villainous trio was sprung from Ryker’s Island by Hammer’s operatives within days. But they soon were defeated during the famous floating villa battle against Iron Man.

The Melter was free in 1983. He and Scarlotti were part of the army of super-villains attempting to kill the Thing (Ben Grimm) while he was hospitalised after his fight against the Champion of the Universe (Tryco Slatterus). That assault failed against an equivalent army of heroes defending the hospital.

Mere months later the Melter again attacked Iron Man. With the help of an imprisoned physicist, he had tuned his old melting ray to devastate the specific alloy used by Iron Man. However, Iron Man was coincidentally wearing an older suit of armour. As a result, the Melter’s attack was completely ineffective, leading to his swift defeat.

In 1986, the Melter was preparing a surprise attack against Avengers’ Mansion with a new melting ray, to reestablish his cred. However, his hired aide was murdered and replaced by a Scourge of the Underworld operative, who gunned Horgan down.

The Melter name has since been claimed by two unrelated persons.

The first was Christopher Colchiss of the young Masters of Evil, whose powers aren’t unlike Horgan’s melting ray.

The second was a man wearing a colour-shifted version of the last Melter costume. He was part of Norman Osborn’s “Goblin Nation”. He’s apparently a newbie who bought the rights to the costume and name (and perhaps the technology) from Roderick Kingsley.

Horgan was originally on a huge power trip. He wanted to reign supreme through his accidental discovery and inspire universal fear.

At first he was remarkably overconfident, and focused on petty revenge. The pettiness eventually took over. Thus, Horgan became a treacherous, revenge-minded, ungrateful, self-aggrandising usual loser looking for an edge. Or a big cheque from a more competent villain.

Horgan occasionally claimed that he was a greater genius than Tony Stark. That was absurd. The main improvements on his ray had been done by Zemo, Stark and — apparently — Hammer scientists.

His smug confidence often led him to make indirect attacks rather than just shoot Iron Man when he couldn’t dodge. Horgan could have won many of his fights had he just shot Stark rather than attempt to toy with him.

However that went both ways – to an extent. Stark usually fought defensively (in DC Heroes RPG terms, Laying Back) in case the Melter changed his mind and stopped playing.

This is especially notable since, in the one fight where he opened with two good shots in a row (in tabletop RPG parlance he got two solid dice rolls), the Melter thrashed and nearly killed Iron Man. He ruined a Golden Avenger-class suit of armour within minutes.

He also had good rolls during the followup fight, destroying an outdated Mk. 2 Iron Man armour like a pinñata.

“With a mask to conceal my identity, I can plunder at will ! The very sight of me will strike fear into the heart of men ! No weapon can menace me, for I can melt them all !”

“Once the world learns that the Melter has defeated Iron Man, none will dare to oppose me !”

(Betraying an accomplice) “You’ve served your purpose to me, and I always did think gratitude is for the birds !”

“I always said I was more of a genius than your boss, Tony Stark, and this time I’ll prove it — by melting you into a puddle of steaming SLAG !”

Would make a good Guy Gardner or Hal Jordan foe. His weapon would have a setting that melts solid energy like the one manifested by Green Lanterns, and depletes ring charge at an accelerated rate.

Successive versions of the melting beam ● 21 points (for the Mk5) ● Descriptor: Technology

* Without Defensive Roll.
** With Costume. 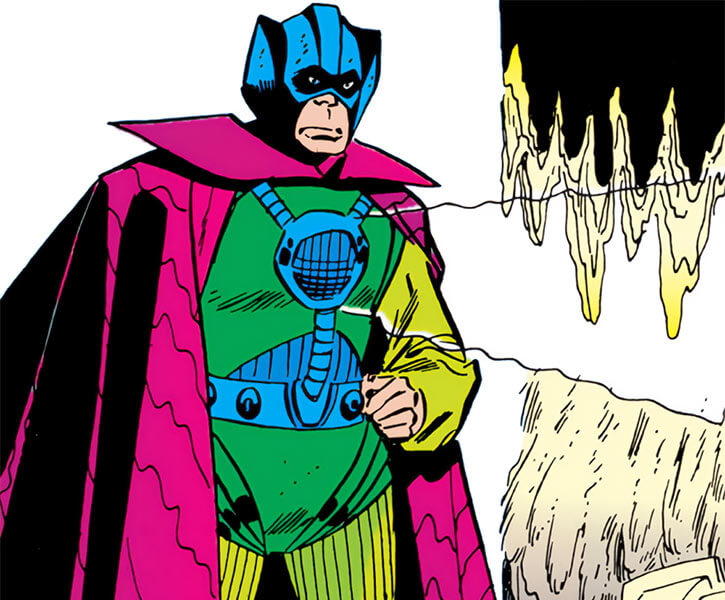 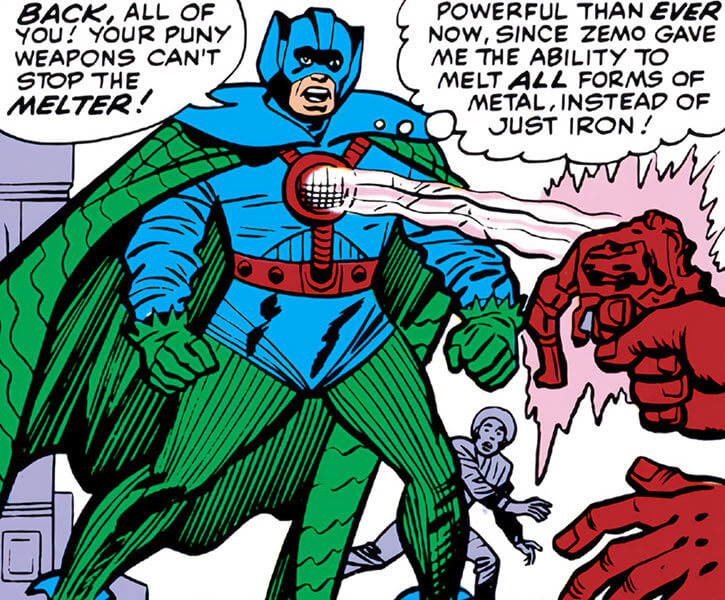 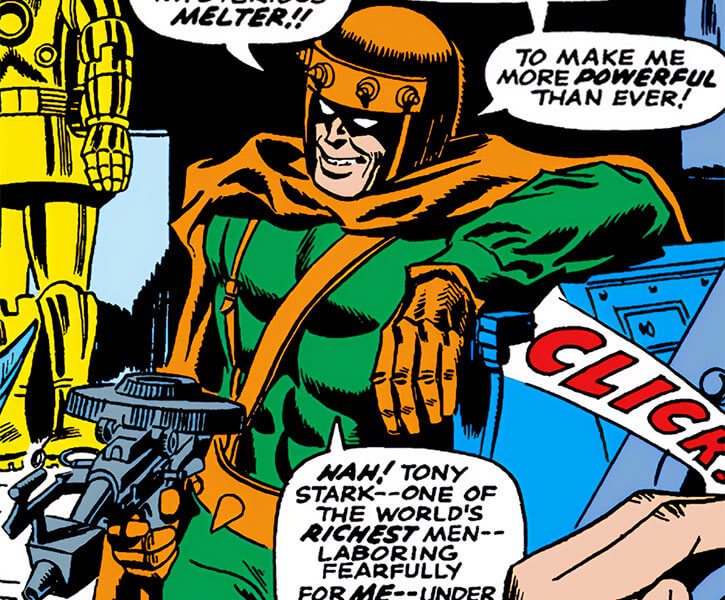 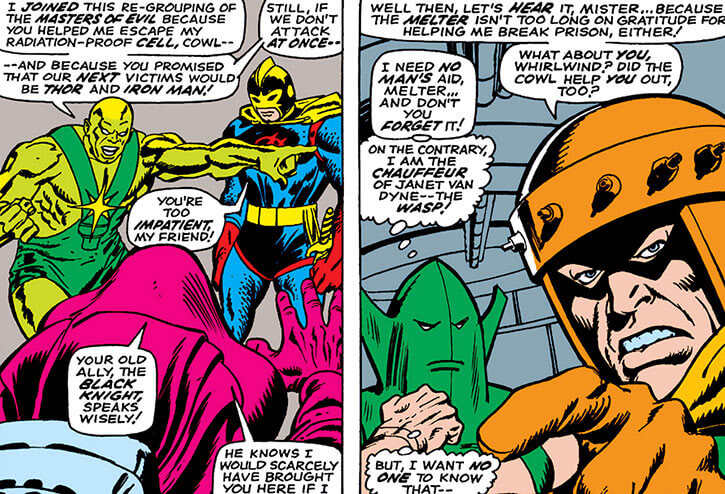 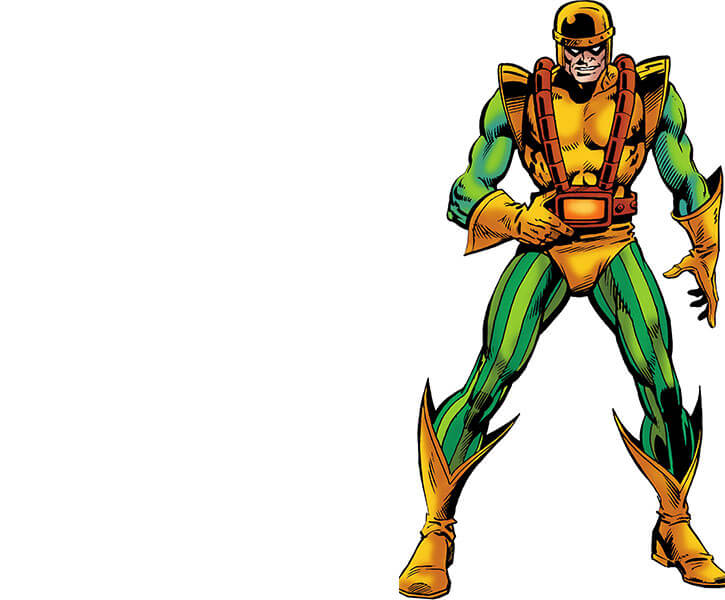 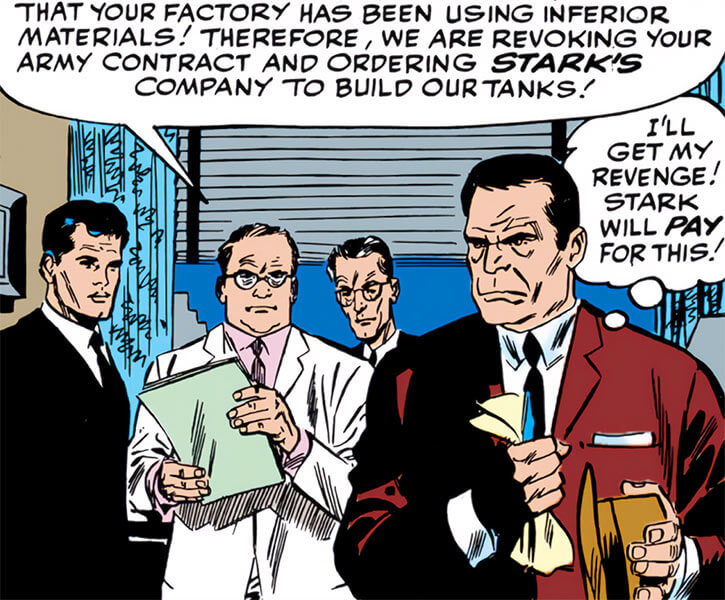