Books about her go back to 1400-ish, and from there has evolved a literary and folk tales fay character. This here is the version of Mélusine as accounted in the classic Baring-Gould compilation of tales.

Melusine is a Siren, a mermaid-like creature of faerie. She has the innate abilities to:

In addition she has also studied magic. She can cast many spells which can:

Apart from her memorised spells, she has many others in her books that she can cast as needed.

One of the standard folktale stories, present in dozens of cultures, is that of the supernatural spouse who marries a mortal. There is always a mistake the mortal must not make. Or else their spouse will abruptly depart, the marriage severed, usually leaving any offspring of the marriage behind.

Melusine was one such being. She married a French nobleman in the middle ages, but he inevitably made the mistake. She returned to her mermaid-like form and departed, leaving her human children behind and returning to her extradimensional watery kingdom.

However, from then on when her descendants were in danger, she would sense it. Melusine would spirit travel to warn them of their approaching danger, or merely mourn their passing, banshee-like.

In her true form she is a beautiful woman whose legs are replaced by a long snakelike tail. This tail becomes broad and flat at the end to help propel her through the water.

Melusine is naturally vain and self-indulgent. Yet she has a genuine sentiment for her mortal descendants. She watches over them carefully using clairvoyance and foretelling, and will warn them (or occasionally someone else nearby) if they seem to be in serious danger. Her warnings are vague and riddle-like.

She rarely physically leaves her kingdom. She might, however decide to take another vacation one of these days, and go out to find another mortal to marry. If she does, she will exact some kind of promise from him like “Never ask me my age” or “Never tell anyone what I really look like”.

This promise is an escape clause for the mortal. The idea is that if he is tired of their marriage, he can break the promise and with it, end their marriage.

“To whom are you speaking in such a tone ?”

“Beware, for your life stands in peril.”

Married Aquaman and left him fairly quickly. Later asked him to get the JLA to help fight off an invasion of her realm.

Any ideas for her mortal descendants? Whoever they are, they should probably have a French last name. 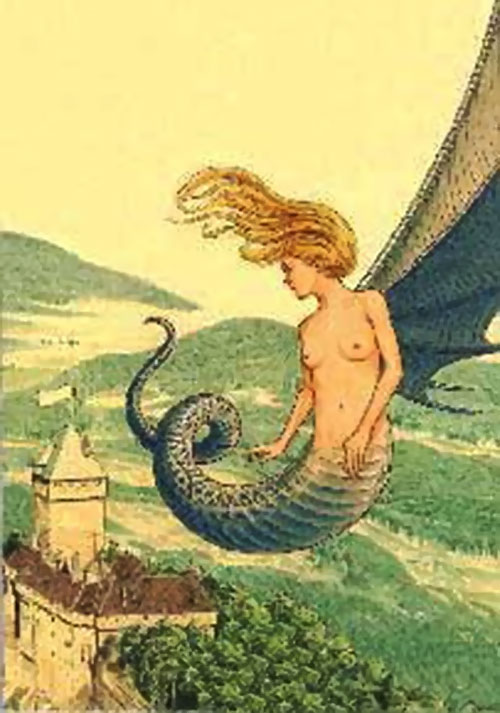