The Mercenary is an expert shooter and fighter and excels at intelligence, B&E, demolitions and surveillance work, making him a redoubtable assassin capable of killing nearly anybody.

He mentioned that one of his weapons was his own invention, so he presumably also has superior technical skills.

Tuskwin is an orphan. He was raised from infancy by a criminal combine to become a merciless killer.

They intensively trained him, and he was apparently active throughout the 1960s.

In 1970 he was hired to kill a witness, who had learned how the Titanium Man (Boris Bullski) had been smuggled in the US. The witness escaped and sought Iron Man’s help, threatening Tony Stark at gunpoint out of desperation.

Stark, who had just clashed with the Titanium Man, agreed to take the witness to one of his fortified cabins in the Adirondack mountains.

However, the Mercenary was one step ahead of Stark and had already bugged his whole vehicles fleet. He even shot another person after Stark, Vincent Sandhurst (the brother of the Controller), so Sandhurst’s ineffective assassination attempt wouldn’t get in the way.

Cabin in the woods

However, Stark had actually detected the Mercenary’s bug – and unbeknownst to Tuskwin, had the Iron Man armour. But even the invincible Iron Man found the Mercenary to be a tough opponent, and when the Golden Avenger gained the upper hand Tuskwin produced a magnetised block that turned off Iron Man’s armour.

The Mercenary then disguised himself as Stark to gain entrance to the fortified cabin and his target. However, the fatally wounded Vincent Sandhurst had dragged himself all the way to the cabin and shot the Mercenary, thinking that he was Tony Stark, before dying.

The Mercenary was apparently slain, and was never seen again.

Arrogant and confident, but also a skilled professional. He was smart and observant, and used surveillance and intelligence extensively, accumulating tons of data about Stark and his security measures.

What defeated him were things he couldn’t know. Such as Stark’s counter-espionage gear being top-grade S.H.I.E.L.D. equipment and him being Iron Man.

The Mercenary fights tactically, using misdirection and denying perception to his opponent, and is very good at improvising stratagems, calmly relying on his arsenal of gadgets and weapons.

He has a fondness for melodramatic speeches, though, and is unlikely to react well at anything doubting his competence.

“The sensor scope has gauged the depth and density of that famed metal suit… windage and distance are automatically calibrated as I jack an armor-piercing shell and impact-head into the chambers. A slight squeeze of the trigger – and Iron Man DIES ! An amusing notion — a pity it isn’t my assignment ! But I kill for pay, not sport ! Why else have those who require my unique services dubbed me – the Mercenary !”

“Raving fool ! The Mercenary needs no one… least of all the encumbrance of a revenge-mad amateur !”

“I’m not an amateur such as you employ, captain ! I am an expert… a professional ! For hire to any cause, any country, for any purpose… and once my fee is met… I deliver ! Money does more than talk when you hire the Mercenary, captain… it KILLS !”

Equipment:
Oh boy, does he have equipment :

Helper(s): Frank, Roy and Niles for the Freudian slips 🙂 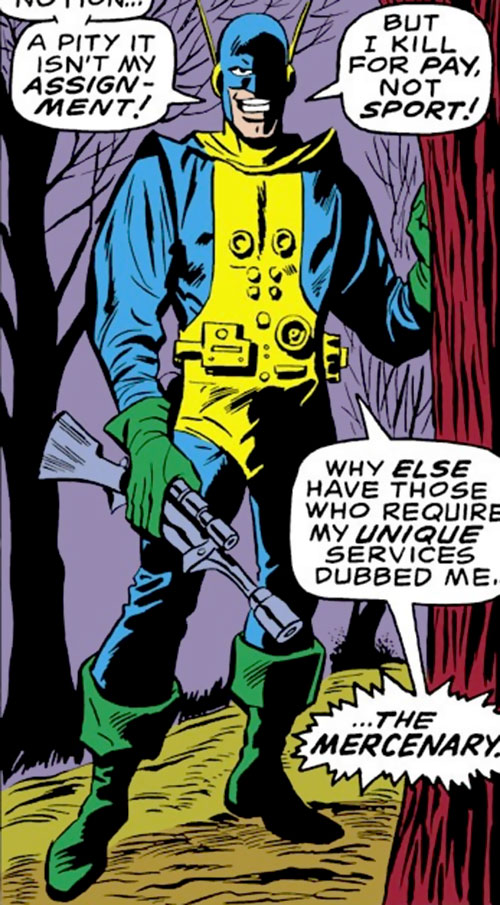 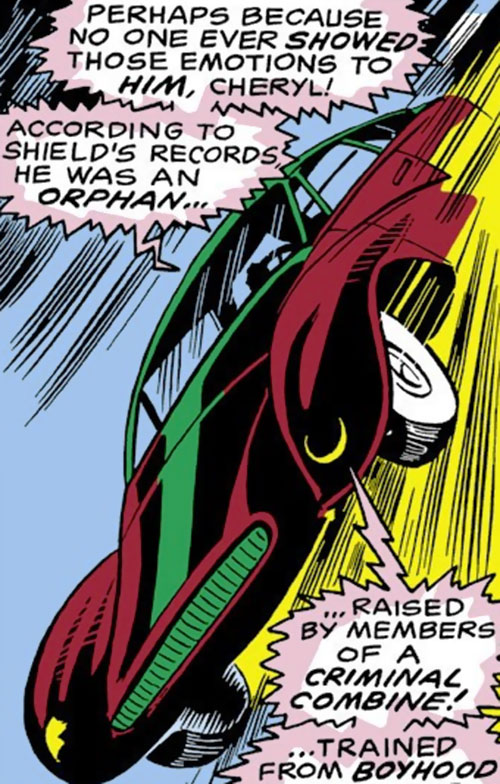 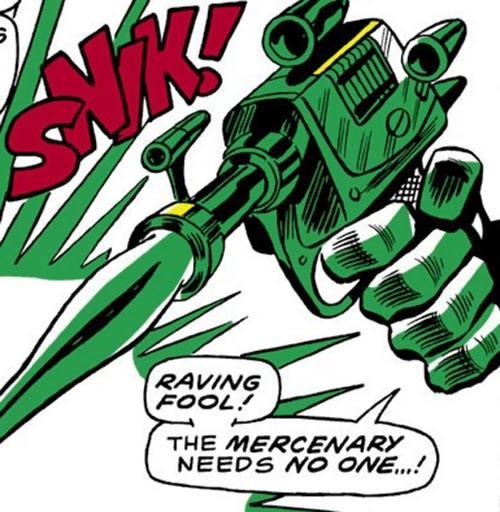