Drake’s Sigil allows him to get whatever he wants, giving him whatever power he needs to acquire it. He can barrel his way through a well-armed battle fleet, break through a starship’s hull, and rescue his target, without taking any apparent damage.

The Sigil also makes him hard to kill, allowing him to recover from seemingly terminal amounts of damage.

A notorious pirate in the Kazrath system, Drake became even more capable when he gained his Sigil. But it didn’t prevent him being abducted to another universe, where he found himself stranded on a planet with 99 other individuals from various parts of his own universe. All came from the Bright Universe as the residents of the Negation referred to it.

He, along with a number of other prisoners, found that the energies of this universe interfered with his powers.

One of the powerless prisoners, Kaine, whom Drake recognized from back home, convinced them that they had been brought there for testing by hidden observers. The prisoners agreed to follow his lead. His lead led their captors to bringing them into the prison proper, where they underwent further lethal testing.

Allowing Kaine to again take the lead, they broke out of the prison and seized a craft. Drake was aboard when it lifted off before most of the prisoners were aboard, its automated systems taking over.

Days later a group of other escapees stumbled across them on a lifeless planet. Evinlea immediately attacked Drake for their perceived abandonment. Shassa stepped in, giving Drake the chance to catch his breath, and the pair easily kept the godlike member of the First off her guard.

The conflict was soon ended when cooler heads discussed the matter (and Evinlea blew her own hands off).

Before they could decide on their next course of action, they were attacked by Lawbringer Qztr, one of the elite of the Negation. After easily handling even Evinlea, Qztr apparently slew Javi. The Lawbringer was distracted from killing them when he discovered baby Memi to be completely immune to his attacks, and abducted her, taking her to the Negation god, Charon.

Kaine rallied the others into agreeing to rescue Memi. But their path led them into conflict with the Clarion Battle Group under the command of General Murquade. They soon found allies when the Battle Group came under attack from the Australians.

Also recently abducted from the ’Bright‘ universe, they had gained enormous power in the transit, and were dedicated to freeing the Atlantean, Gammid, from the clutches of the Emperor Charon.

Kaine’s group allied themselves with the Australians. Drake helped turn around their losing battle against General Murquade, by flying through the remains of his flagship, knocking him off his strategic position on the hull of the craft. This allowed the Australians to overwhelm him.

They then used the shell of the destroyed flagship to slip through the warp gates and charge the Negation homeworld, where they’d learned both Memi and Gammid were being held. 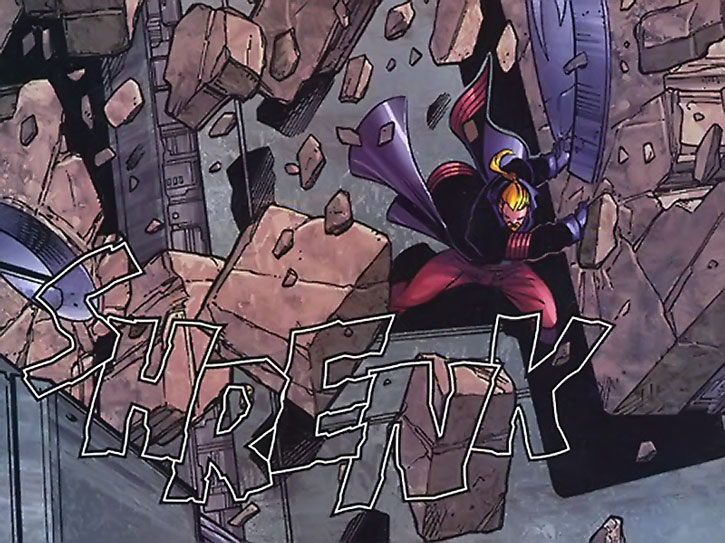 Rescuing Memi and Gammid, although the Australians were killed and Kaine was missing for a short while, the escapees fled the homeworld. They heard from Kaine soon after, and had to race to get to him before the Negation. They rescued Kaine, and he convinced them to try and help free the resistance leader, held in a secure prison facility.

While some of the others created a diversion, Drake and Matua broke into the prison. They found their target protected by Lawbringer Lkqr, against whom Drake had little success, even when Evinlea arrived to support them.

Drake and Evinlea were more-or-less done for when Matua sacrificed himself, using one of his most powerful magics to kill Lkqr and himself. The loss further embittered some of the escapees against Kaine.

Shassa, a constable rather than a soldier, didn’t like the prospect of more death in the future, so sided with the escapees who decided to find a quiet planet where they could try and make lives for themselves.

Loud and brash, Mercer rarely lets anything worry him. Although he does seem cautious around Kaine, whom he recognized from back home. His powers make him fairly confident in his ability to deal with anything that gets in his way, so he rarely hesitates to jump into the action.

He has a ruthless streak, and wouldn’t think twice about executing unconscious enemies if that were the smart move.

“The only lesson I’ve learned is that if you fight the Negation, sooner or later you end up dead ! You wanna make war on an Empire of trillions ?! Count me out !”

Drake’s Sigil gives him the ability to take whatever he wants. It provides him whatever power he needs to find and acquire his target, allowing him to track his target across galactic distances, and letting him rip his way into a heavily armed starship.

Before using his powers, Drake must specify his intended Goal (rescuing a colleague, acquiring an object, neutralising an opponent, etc.). He may then specify which Powers he wants from his Sorcery (and, if necessary, explain how they are needed for his plan).

He cannot use any Powers which would not aid in achieving his stated Goal, unless he were to change his stated Goal (so he couldn’t help one of his team mates in danger, unless rescuing them was his goal).

In the same way, Defensive Adaptation only protects him from harm while he is directly in pursuit of his Goal.

When he first arrived in the Negation universe, his powers were subject to the wild energies of the place until he became used to them.

During this time, any attempt to use a Power (or Ritual) runs the risk of a Catastrophic Burnout. And the Burnout of an offensive Power results in Area Effect (1 AP Range) Energy attack centred on the character at the AP level of the Power, to which they are also subject.

This Burnout need only be bought off from the character’s highest Power to remove it from all, at half the cost of buying off a regular Burnout.

This was eventually removed for him by Gammid.

He only gained the Exile Drawback and the Language Advantage in the Negation universe.

The Sigil allegedly makes its wearer harder to kill, so I’ve used Invulnerability to model this. 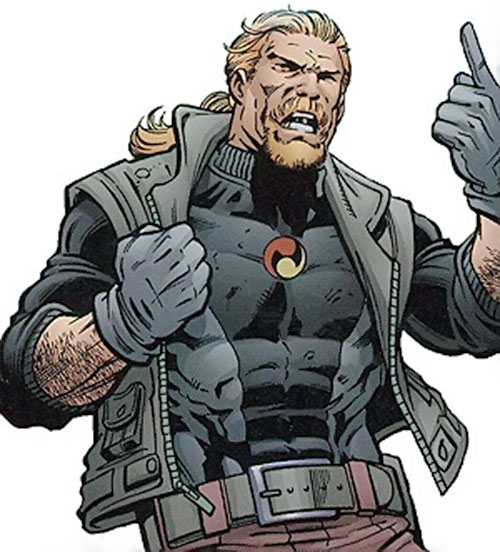 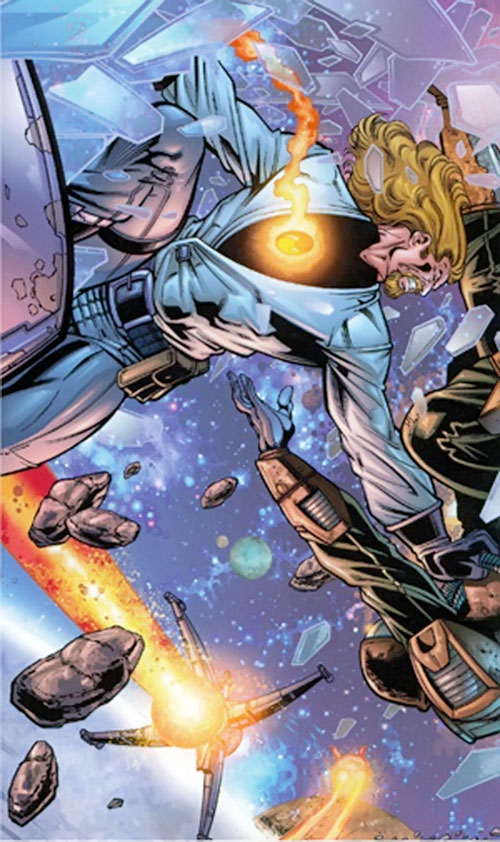 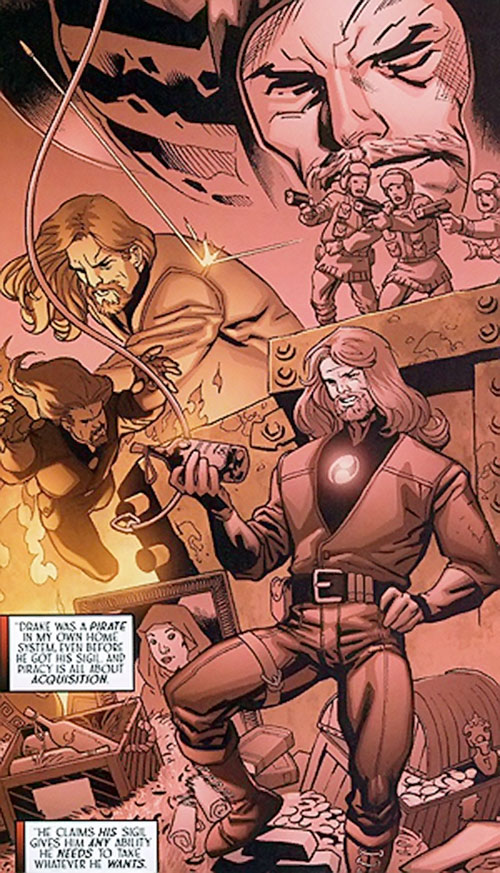