Merc is extremely fast and gifted with modern weapons – of which he carries plenty. He tends to vanish from the battlefield at superspeed, flank his opponents and shoot and grenade them from behind, picking his targets. When faced with tough targets he’ll make liberal use of the Auto Ammo rules, often combining them with Critical strike.

“Merc” (identity unknown) was in a South American war a few years ago when he was apparently struck by lightning. This burned away most of his memories and any sense of right and wrong he might have had.

He picked up the uniform of a nearby casualty, improvised a mask and won the battle for the side he now fought for.

He has since scrupulously avoided anything that might remind him of who he is – he prefers to stay without a past, free of any allegiance.

Merc has been quite successful, and is a rather wealthy man. He has worked for numerous amoral employees, and currently is a Crusher due to his hatred of the Enforcer, a heroic member of the Crusaders, a team often opposing the Crushers.

Merc’s uniform is almost military in its colour scheme. 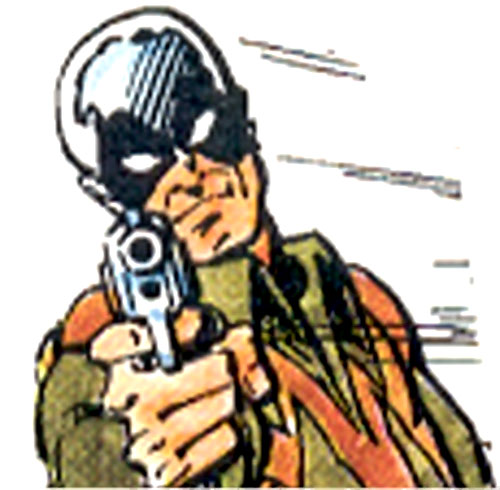