He’s just a thug with a silly-looking gimmick, but he’s surprisingly tough. That makes him interesting for Gamemasters with street-level RPG campaigns.

Metalhead is a powerful, very aggressive fighter. He sports a rock-solid musculature and lots of endurance. He’s a superior brawler and pragmatic martial artist. He could fight an exhausted, wounded Batman toe-to-toe.

Metalhead is fond of heabutting some hapless lowlife and standing there with blood over his head and face to intimidate the others. In DC Heroes RPG terms that’s Charisma (Intimidation) coupled with a Force Manoeuvre.

Metalhead wears a distinctive spiked costume, allowing him to perform murderous strikes. The gloves are spiked much like Classical cesti. But Metalhead’s main weapon is his spikes-covered hood. It allows for deadly head-butts or even bull-like charges to inflict grave, bloody wounds.

Furthermore there’s a heavy bladed lash on the top. Metalhead has obvious expertise at moving in such a way has to deliver heavy slashes with his head-lash. In terms of reach, effectiveness and the like it’s pretty much as if he was wielding some sort of bladed flail. Like many flails, this weapon is difficult to counter.

(The “Metalhead” moniker likely comes in part from this attack resembling headbanging  with long hair.)

One of Metalhead’s main assets is that body blows, even delivered by a strong and skilled person, are unlikely to have much of an effect. He’s too strong. Our game stats assume a mix of hard muscles and body mass, plus a subtly armoured costume. Though the later is not clearly demonstrated, it works well and remains simple.

Body blows having little effect, opponents will have to hit Metalhead in the head to bring him down. But the hood is heavily spiked, protecting against most blows and inflicting bad wounds on unarmed fighters. Thus, whilst hitting Metalhead in the noggin is not a Trick Shot but a normal attack, it can easily be a losing proposition.

Batman countered by using Trick Shots to rip the spikes away until he cleared enough of a surface to punch Metalhead out. This both prevented hurting his hand, and removed the armour.

Metalhead showed up in Gotham in 1992. Since he was a criminal wearing a mask, he wanted to join the False Faces Society of Gotham. He was looking for its leader, Black Mask. It is possible that Metalhead felt that he had outgrown whichever town he used to operate in.

As it turned out, Metalhead came to Gotham right during Bane’s plot to break Batman (Bruce Wayne). Many Gotham villains had been manipulated or hired to assault the Caped Crusader. Thus, Wayne had reached a dire state of exhaustion.

As part of these constant battles and crises, Black Mask had been defeated. Nobody knew where he was, or even if he was still alive. Metalhead’s brutal “investigation” of lowlives dens to find out where to contact Black Mask thus produced a lot of blood, but next to no lead.

His activities, however, attracted the attention of the wounded, fatigued Batman. He soon engaged Metalhead in a fight. This turned out to be a difficult fight for the diminished Batman. But the Caped Crusader eventually prevailed and the unconscious Metalhead was arrested.

Metalhead has not been seen since. Maybe his encounter with Batman convinced him to go back to his old turf, or maybe he’s still in prison after having been transferred to another state.

Less-than-bright but powerful thug. He solves just about every problem by hitting it until it ceases to be a problem. He’s proud of his own strength and skill.

He *hates* people mocking him. His DC Heroes RPG Rage Drawback reflects a very low patience threshold before he resorts to deadly violence.

He has no subtlety whatsoever. His idea of an “investigation” is to slaughter people in seedy bars until somebody talks.

“Great. Another comedian. I hate comedians…”

He’s got but one appearance and it’s difficult to assess how weak the wounded, exhausted Batman was when he met Metalhead. Thus these stats are inevitably speculative.

Our conservative stats assume that Batman would have eaten him alive had he been rested. But Metalhead might actually have higher stats (STR 05, in particular, is not impossible).

Metalhead will keep at least 15 Hero Points for LDD purposes, and more probably 20. 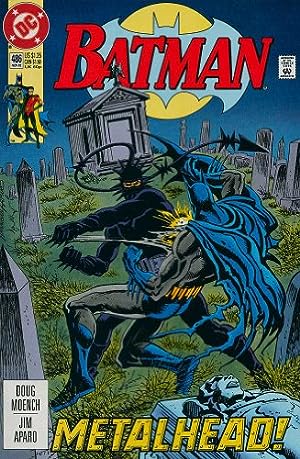 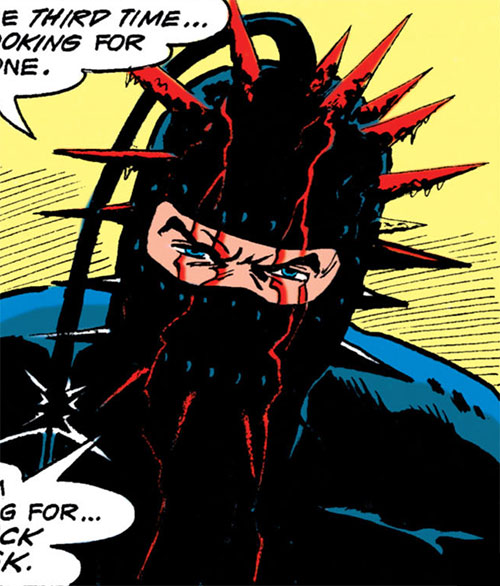 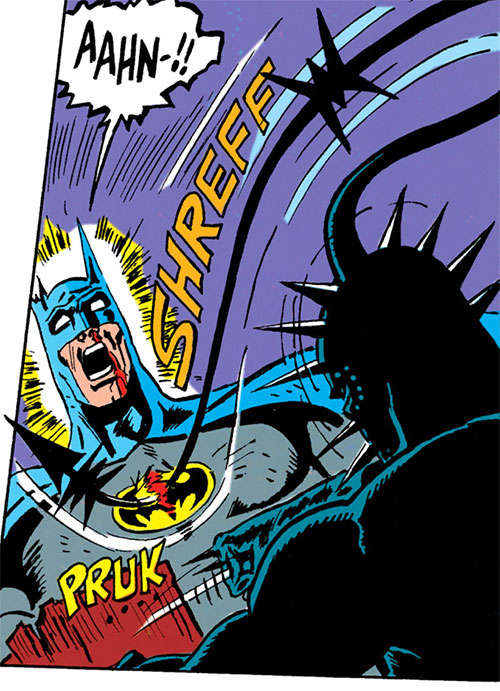