At the time of his arrest, Scofield was employed as a structural engineer at the prestigious firm of Middleton, Maxwell and Schaum located in Chicago, Il.

Inmate Michael Scofield, with no prior convictions, was convicted of armed robbery after attempting to steal over half a million dollars from the downtown Chicago branch of United Savings Bank. At the trial, Scofield pled no contest and requested to serve time in the Level One facility closest to his Chicago home.

Additional Notes: Inmate suffers from Type I Diabetes. Inmate has logged visits with Veronica Donovan, his attorney, and is approved for monthly conjugal visits with Nika Volek, his wife.

Official (I think) promo/trailer video for the first season of the show.

Michael Scofield is a creative genius skilled in architecture. He is capable of laying out complex yet structurally sound plans, as well as some backup plans. Scofield is exceptionally perceptive, too much so in fact, and is unable to filter out information like most people are.

Besides being a competent architect he understands exactly how most machines are constructed. He has also displayed acting skills good enough to fool the guards, reasonably good climbing skills, and okay social skills. He has learned to be real sneaky and has a real knack for keeping objects hidden on his body even when being checked.

Small objects could also, in fact, be surgically implanted into his arms or legs, to be taken out later when needed.

Scofield has a real weakness in being strongly empathic. The pain of his surrounding is his pain. Also, he sometimes tends to get into sort of a mental overdrive where it is impossible for him to stop thinking, although he will soon be back to normal again.

The whole upper part of Scofield, including the chest, back and arms, is covered by patterned tattoos. These beautiful tattoos look like Gothic stylized battling demons and angels, plus texts and church motifs, but are in reality a complete architectural map of the prison. It has been said that memorizing the complete plans would be like memorizing the phone book.

However, whenever Scofield needs to know some plan detail, where tunnels go, etc. he can get the information from the tattoos by looking at them (sometimes through a mirror) as if he possessed the Area Knowledge (Fox River State Penitentiary) Advantage.

In addition, the body tattoos also contain details about the continued escape outside of the prison, i.e. backup plans about terrain and other things. At points, the GM is urged to allow Scofield to use the Area Knowledge Advantage as if he had it about any given area he resides in. After studying the tattoos for a few minutes he can then roll a Perception Check about the area details as usual.

Michael Scofield is a slenderly built young man with crew-cut hair. His upper body is completely covered with beautiful tattoos. He appears to be calm, unafraid and focused.

Clinically diagnosed with low latent inhibition, Michael Scofield is unable to block out periphery information. He instead processes every aspect and detail of any given stimulus. This, combined with a high IQ, theoretically makes him a creative genius.

Due to a feeling of abandonment during childhood, Michael developed very low self-worth making him extremely empathetic and altruistic towards other peoples’ emotions, as he is unable to block out their suffering. This explains Michael’s desire to make huge sacrifices to help others.

The last year Scofield has planned the prison break in perfect detail to allow for him to escape with his innocent brother. As an adult Scofield has had to play big brother to his big brother. Clearly, he has spent all his time into planning, and spent a great deal of energy in the matter. Today, he is well-trained, focused, disciplined and exceptionally goal-oriented.

When driven towards a well-planned goal Scofield normally appears as a calm and rational man. He moves calmly and talks in a friendly manner, because he knows exactly what he is doing, and can easily become friends with just about anyone as soon as he has found out what the other one wants. His calm, focus and mental alertness are so strong that others can easily see this.

His ’crew‘, for example, accepted him as the defacto leader, and immediately expected him to come up with a backup plan whenever something would go wrong, and usually he did do just that. He has few natural friends, every minute of his day spent planning the next move.

The only people close to him are his brother, his cellmate Sucre and the Prison doctor, Sara Tancredi, with whom he had a developing romantic connection.

But the cool is but a rational mask. When his actions are completely blocked, as in being kept in isolation, his mind goes into overdrive and eventually, unless a solution is found, he will turn non-rational. For example, when in an isolation cell he tried to remember a map to further his escape, but had no paper, so he crushed his own hand and used blood as ink on the wall.

Nothing, not even the corruption of his high morals, can stand in the way of the planned prison break. He is ready to do lots of sacrifices to succeed. Although he is basically a decent man, circumstances too often force him to abandon his high morals, all for the sake of the goal at hand.

Perhaps due to his fanatical mindset he seems to possess a very high pain threshold and so where others would scream out in pain he will usually not. The fear of pain that debilitates others does not really affect him much.

Lincoln Burrows had, unbeknownst to his brother, financed Michael’s college by doing short jobs for a mobster named Cobblepot. In the end Lincoln tried to get out of the rackets, but was caught in action by the Huntress before he could get himself clear. As a result Lincoln ended up serving in Blackgate beside the mobsters he had betrayed. No one expected him to live out the year.

Two years before the events of Batman: No-man’s-land Michael Scofield was hired to modernize the prison at Blackgate. He updated the 150 year old castle-like structure to modern security standards.

When Lincoln was sentenced there Michael quickly arranged to follow him by stealing the payroll truck from a Lexcorp construction site (Gotham construction workers by long tradition were paid in cash). What would have happened under normal circumstances we will never know.

Six days after Michael’s arrival there the city of Gotham and the Prison at Blackgate both fell into anarchy. Gotham was declared a disaster area and beyond federal jurisdiction. During the No-man’s-land events Nightwing was sent by the Batman to bring the prison under control.

At the same time the criminal known as the KGBeast, also incarcerated at Blackgate, was hired to kill Lincoln. Michael Scofield and Nightwing involved themselves in a week long campaign of manipulation and control of the prison itself (the week-long campaign reflected the quality of a season of 24).

Scofield knew how to get places and find things; Grayson was a strategist and combatant that few could equal inside the prison walls. In the end Lincoln was given the Mark of the Bat and was considered protected in exchange for Michael’s work in securing the prison.

Nightwing left the helipad door open behind him in a parting gift to Michael Scofield who stood just inside. Michael would not leave without Lincoln. He locked the door and returned to the prison floor.

Michael and Lincoln remain imprisoned while planning. They are no longer hunted by the psychotically violent killers of Blackgate, but Lincoln bears a larger than ever enmity from Cobblepot because of the face he lost in failing to have him executed.

Before entering the penitentiary Scofield has carefully studied the prison blueprints, as well as the surrounding area, using his Scientist skill. It is safe to assume that he received full RAPs on those rolls. In principle, the RAPs are already there, but he will have to remember it (which the tattoos often facilitate).

He will know which structures are possible to weaken by engineering tricks (i.e. lower their RV so that they become passable), the existence of tunnels and so on according to GM judgement or by allowing him a new Analysis roll.

As explained under his Terrain Mastery Shtick, Scofield can alter his environment at a reduced cost. The success of an Analysis roll should indicate which alterations are allowed, and then performed at half price up to the maximum cost according to the Shtick (8 HPs tops). Scofield rolls for his Analysis skill at least once per adventure.

Although Scofield has the capacity to plan complex plans complete with backup plans, he seems to be hounded by bad luck. Despite the fact that he is a very skilled man, he still fails due to circumstances beyond his control. Examples from the series are: if he had weakened a certain structure earlier to be able to bypass said structure later, the structure would have been exchanged with a new piece just prior to his bypass attempt, or an important map area hidden in his tattoos got damaged and unreadable just prior to interpretation.

In game terms, Whenever success seems assured the GM should change some parameter, thus severely increasing the OV/RV of the planned attempt, and then judge that Scofield has just suffered his Unluck Drawback for that adventure.

Scofield often then, after brief planning, tries to counter or invent a backup plan using his Terrain Mastery Shtick. Unfortunately this costs him HPs, which means he sometimes really gets stuck in his plans. Scofield also seems to intuit which people are useful to his plans, and always comes up with some way to make them cooperate with him regarding information, materials or work; this is represented by his Connection to the inmates.

He has also sometimes used various people outside the prison walls, at which point the GM might allow him to purchase needed Connections using a very temporary Omni-Connection Advantage. 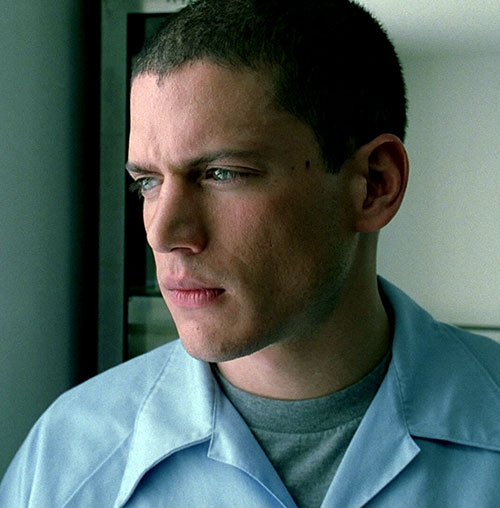 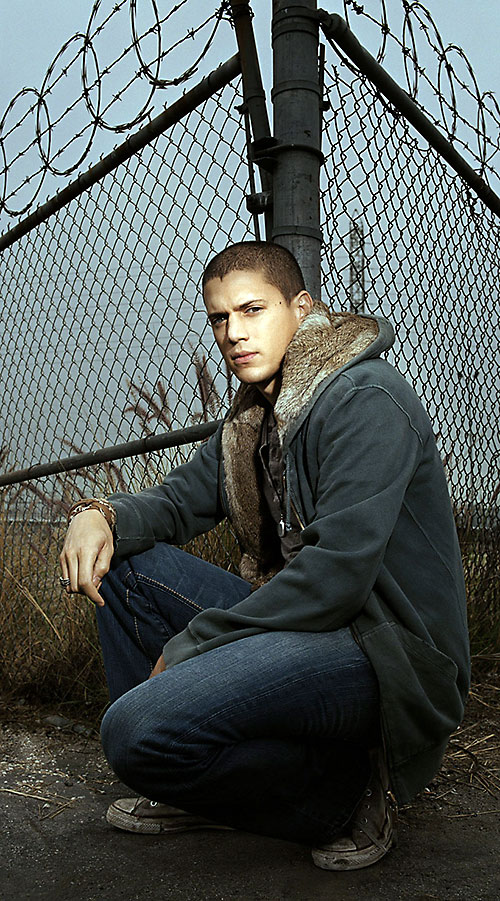 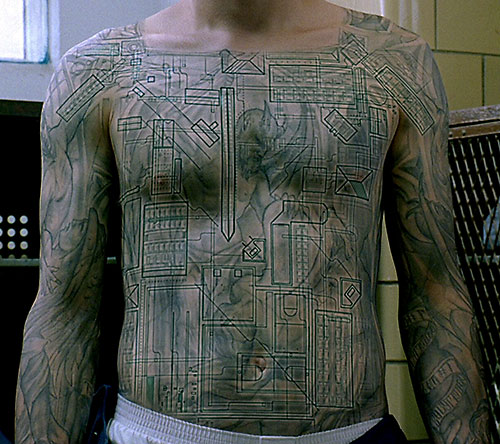