Vaughn is an experienced CIA agent, with extensive tactical, undercover, and analytic knowledge.

As well as expertise in intelligence gathering, he has had extensive combat experience, including leading teams into hostile situations. He is skilled in the use of most modern firearms.

He is also a good ice skater and hockey player. He has worked for a while as a French teacher.

Mr. Micheaux was a follower of Rambaldi. As such, he became involved in decryption work for the organisation Prophet Five. They gave portions of the code to a number of different individuals. But when the work was nearly completed, Micheaux realised that Prophet Five were killing the others.

He warned fellow target Luc Goursaud, and they both fled with their work and their families. They also changed their names. Thus, little André Micheaux became Michael Vaughn, though he was too young to remember that he used to have another name. His father became William Vaughn. Bill Vaughn joined the CIA, but was killed by KGB agent Irina Derevko, while Michael was still young.

When he was old enough, Michael joined the CIA himself. There he developed a strong friendship with fellow agent Eric Weiss.

After a few years he was contacted by Renée Rienne. She was a terrorist on the CIA’s most wanted list. She was also the daughter of Luc Goursaud, and filled Vaughn in on their fathers’ histories. They formed an alliance to discover information about Prophet Five.

His investigations into Prophet Five led Vaughn to be part of the Agency’s investigation of SD-6 and the Alliance of Twelve. When SD-6 agent Sydney Bristow came to the CIA to offer herself as a double agent within the organisation, Vaughn managed to get himself assigned as her handler, despite being too junior for the role.

He oversaw her counter missions, and they grew close during their time together.

Sydney began to have suspicions that her father had been a KGB spy. Vaughn’s investigations revealed that the agent they believed him to be had murdered a number of CIA agents, including Bill Vaughn. Taking it to the CIA, they were told the truth. It had been Sydney’s mother, who was believed dead, who had been the spy.

Vaughn and Sydney struggled to keep their feelings for each other in check. But they couldn’t be seen together for fear of SD-6 finding out about it. When they finally took down the Alliance, they were finally able to advance their relationship. Their happiness was short-lived, however, as Sydney was soon apparently killed by a mole working for Arvin Sloane.

Devastated by this, Michael left the CIA. He eventually became a French teacher. He also met and married NSC liaison, Lauren Reed.

Vaughn was recalled by the CIA a couple of years later, when Sydney was discovered alive. He was sent to Hong Kong to determine if it was really Sydney. Distraught at not remembering the time since her apparent death, she was angered when she learned that he was now married. Their relationship became strained.

Michael returned to the CIA, and resumed working with Sydney. Lauren operated as NSC liaison to the operation. The relationships grew strained as Vaughn realised that he still loved Sydney. Eventually he decided to leave Lauren.

However, Vaughn had to halt his departure when it was discovered that she was a spy for the Covenant. He stayed with her, getting what information he could. But she eventually learned that he knew, and went to ground.

Vaughn soon learned that Lauren was involved with Julian Sark, her partner as head of the Covenant’s US operations. But he managed to escape them after they interrogated him for information.

Becoming obsessed with Lauren, he accepted Jack Bristow’s offer. Thus, he could use use of one Mr. Bristow’s cache’s for disposing of her body. He tracked her down, and took her captive. But before he could kill her, he was stabbed in the back by Katya Derevko, Sydney’s aunt. She too was working for the Covenant.

Waking in hospital, he learned that Sydney had gone after Lauren. She did not know that Katya was an enemy, although she did realise this in time. Vaughn raced to catch up with them. He arrived just as Lauren had the upper hand in the fight. He shot and killed her.

Following this he burned down the house they’d shared, and apparently left the CIA again. In actuality, he’d been recruited to APO, a black ops division of the CIA. Thus, he again worked with Sydney and many of the personnel from his previous posting, under Arvin Sloane’s command. Vaughn and Sydney resumed their relationship.

When visiting his dying, comatose, uncle, Vaughn came into possession of a journal in his father’s handwriting. It held entries from three years after his supposed death.

Michael’s investigation put him in contact with someone who claimed that his father was still alive. They also could provide his location. Confiding in Sydney, Vaughn stole the object of an APO mission for his mystery contact. He then went AWOL from APO.

He took part in a mission they had organised to steal an artefact from a CIA convoy. But when he realised they’d lied about his father being alive, Michael turned on them. He brought both objects back to APO.

He was part of the mission that entered Sovogda when it had been infected by Rambaldi technology. On the way, he proposed to Sydney. She accepted, and soon after they went for a vacation to Santa Barbara. During the ride there he began to tell her the truth about his father and Prophet Five. But their car was run off the road before he could finish.

Vaughn woke to find himself held by Prophet Five. They wanted information his father had taken from them. He managed to escape. But when he made contact with Sydney, he learned that the CIA considered him a possible traitor, and wanted him in custody. Sydney misdirected the CIA and met up with him, as they followed leads. While searching, Sydney found out that she was pregnant.

They eventually got in touch with an acquaintance of his father. But when Vaughn went to talk to him while Sydney waited in the car, Prophet Five agents arrived, shooting the pair.

Sydney got Vaughn to a hospital before he died, but he was still in critical condition. Knowing Prophet Five wouldn’t stop coming after him, Jack arranged to fake his death. He had Vaughn sent to a secret location in Bhutan, where he could have the time to recover.

He was still there when he received the news of his daughter’s birth. It was a little over a month later when Sydney appeared to arrive. She told him that he had a chip in him they believed would complete the one they dug out of Renee’s dead body. They found the chip in him. However, Michael soon worked out that it wasn’t Sydney who had come to him.

He played along, and travelled with her to find his father’s hidden files on Prophet Five. He confronted her, learning that she was really Anna Espinosa, and they fought. She got the better of him, but when she went to shoot him, she was killed by the real Sydney, who had just caught up with them.

The couple had a brief reunion. But then Sydney had to pretend to be Anna, to infiltrate Prophet Five. Rescuing Sydney after Prophet Five deemed Anna expendable, Vaughn finally got to return home and meet his daughter, Isabelle.

When Sloane took over Prophet Five, and blew up the APO offices, Vaughn joined Sydney and Jack as they tracked him to Rambaldi’s tomb, in Mongolia. Sloane was apparently killed in the incident. Vaughn and Sydney were forced to leave the mortally wounded Jack, to follow Sark, who fled with a precious Rambaldi artefact.

They tracked him to Hong Kong. There he rendezvoused with Irina, who was planning to initiate global war. While Sydney confronted her mother, Vaughn went after Sark to prevent a nuclear strike against Washington, D.C. and London.

After a brief fight, Sark, not really interested in mass destruction, offered Vaughn the deactivation codes in exchange for being allowed to leave. Vaughn agreed, and the launches were averted.

Vaughn and Sydney left active CIA service shortly after, got married, moved to a remote beachfront home, and had another child, Jack. They were occasionally drawn back into action, but were otherwise happy living a quiet life.

When working, Vaughn is serious, stiff. He can get highly-strung and emotional. Outside of work he tends to be more relaxed, especially around Sydney.

He has trouble suppressing his feelings, even if they sometimes get in the way of work, and his relationship as Sydney’s handler was sometimes complicated by the mutual attraction they shared.

Weiss: “Was a little overkill, though. C’mon… burning your house down ?”
Vaughn: “It wasn’t a happy home.”
Weiss: “Yeah, but still… fire.”
Vaughn: “Yeah, well, you kill your wife after learning she’s a vicious, homicidal double agent, and see how rational you are.”

As an agent of the CIA, Vaughn has access to their resources when on missions. Sometimes his job requires that he kill those who present a threat to his country, and the CIA provide a measure of protection from legal repercussions (and loss of HP awards), so he has the ’Licence to Kill‘ Advantage (found in the literary James Bond character profile on WORG).

Prior to Season 4 his Dex was 4 APs, and he only had 20 HPs. During the first season he had the Secret Identity Drawback, as he had to keep his job secret from sometimes girlfriend, Alice.

He only has his current Dependants Drawback from the middle of season 5, but during Season 3 he had the (0pt) Drawback for Lauren. 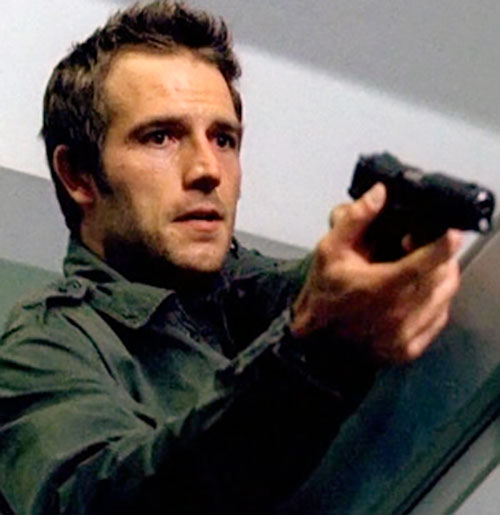 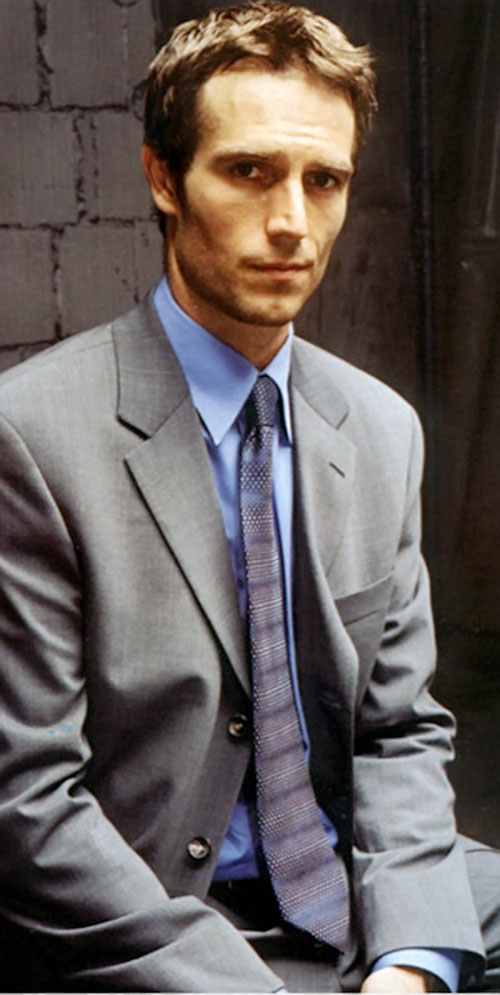 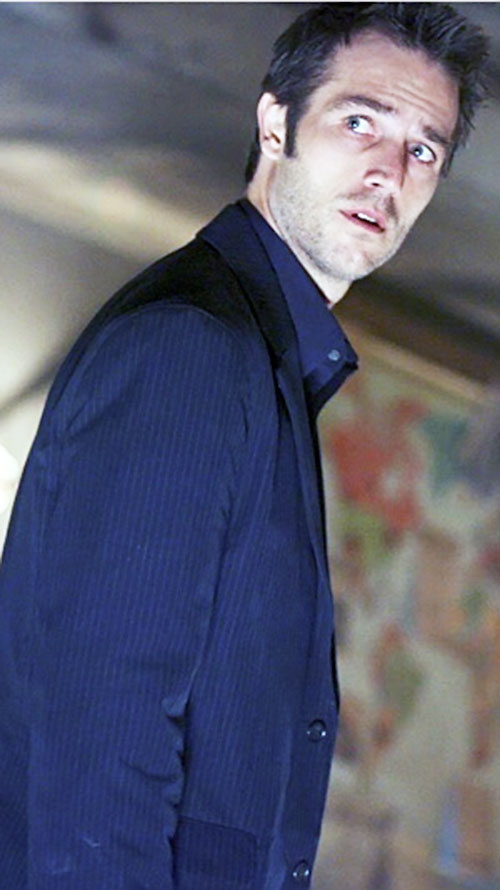