If you’re not familiar with the material, check our Teenage Mutant Ninja Turtles team profile first.

Michelangelo has the species wide adaptions that one would find in reptiles classified as turtles (chelonians).

Though it has yet to be confirmed, Michelangelo’s mutation has most likely converted him into a warm-blooded organism (unlike normal turtles).

Michelangelo is a formidable hand to hand combatant. Over his short lifetime, he has mastered of both the kobudo  and qigong  martial arts styles. He has displayed a level of skill in both that one can only find in cinematic  martial artists.

In addition, he is a superb athlete and world-class acrobat.

Finally, Michelangelo has mastered the art of ninjutsu. His skills of stealth and deception are so polished that he can virtually hide in plain sight.

Of the four Turtle brothers, Michelangelo is the most physically gifted. If he trained as hard as Leonardo or had the raw intensity that Raphael possesses, he would achieve a level of skill and prowess that surpassed the others.

Michelangelo wields a pair of nunchakus in battle. Other than his “chukkas,” Michelangelo keeps a reserve of shuriken on his person at all times.

(A general history of the Teenage Mutant Ninja Turtles can be found in the team’s own WORG entry.)

Like all of his brothers, Michelangelo appears to be a large bipedal turtle. His body is hairless, his skin is deep green colour and he has no visible nose or ears. Both his hands and feet are three fingered/toed, and his eyes are jet black.

Unlike a normal turtle, his eyes point directly forward and are distinctly human in appearance (if not unusually large).

Michelangelo has a large and pronounced shell situated in the centre of his back. It is clearly a part of his body, and extends across the entirety of his torso. The portion of the shell that covers his chest, stomach and crotch area is a light brown in colour.

With his shell protecting his modesty as well as his vitals, Michelangelo doesn’t normally wear cloths unless he is attempting to hide his mutated features from humans.

The only clothing that he normally wears is a battered leathern belt that he utilizes as a harness/holster for his weapons, light strips of cloths around his joints (wrists, elbows, knees, and ankles) and a red strip of cloth that he wears around his eyes when expecting combat.

The cloth resembles a domino mask while on, but in truth does little to protect his identity.

Michelangelo is the quintessential fun-loving “dude”. He has a gentle (yet mischievous) nature and would rather be out just fooling around rather than fighting.

This isn’t to say that he doesn’t enjoy a good brawl; he enjoys the rough and tumble stuff as much as any of his brothers. He just doesn’t enjoy the constant training that his father (and Leo) expects of him. Fortunately for Mikey, his natural athletic prowess and luck make up for any lack of discipline he exhibits.

Mikey’s personality in the Mirage series was starkly different that in either the IDW series or cartoons. In IDW he was the youngest brother and acted like it, often being depicted as exuberant yet immature… almost to the point of being “cute.”

The TV series made him a party dude who made the phrase “cowabunga” famous.

The Mirage series’ Mike wasn’t a wanna be surfer or a kid. He was a kick-butt warrior who had lack of focus issues. He had his moments of immaturity and liked toys, but not to the extent of the television series or the current iteration of the Turtles.

“Hah ! Heard ya coming, pal ! What did that good for nothing bum, the Shredder, teach you guys anyway ? Too bad I can’t stop to give you a few pointers ! Bye, Bye NOW !” [crack !]

Splinter: “Michelangelo ! Stop fooling around ! The manriki-gusari is not a weapon to be trifled with !” [macks Michelangelo with his staff]
Michelangelo: “OW !”

“And as for you ’Mack the Knife‘… your blade’s a lot sharper than you are !”

“Don’t worry. No one will hurt you as long as we’re alive !”

Differentiating Mikey from his brothers was difficult. In the original series, Mikey was supposed to be the Turtle with the most physical potential but also the laziest. He can best Raphael in simulated combat but at times needed as much (or more) rescuing as Donnie.

I tried to model this by giving him the highest DEX of the four and Lightning Reflexes but leaving his actual Martial Artist and Weaponry skills in line with his brothers (hopefully modelling the fact that he could be better but chose to use his natural athletic prowess instead of working hard). 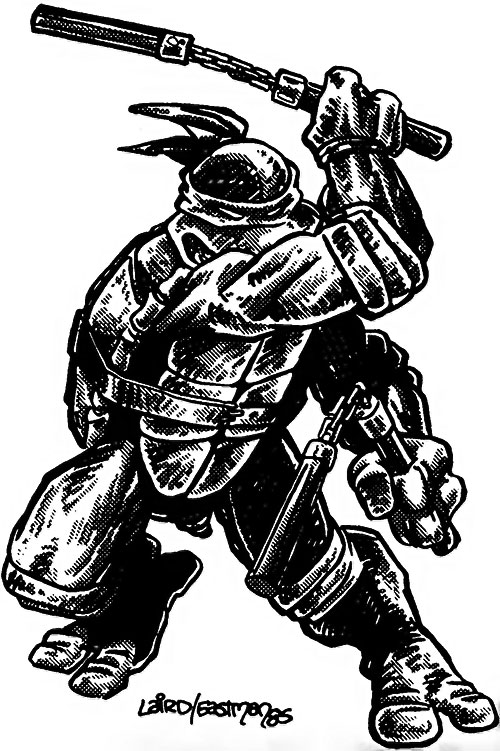 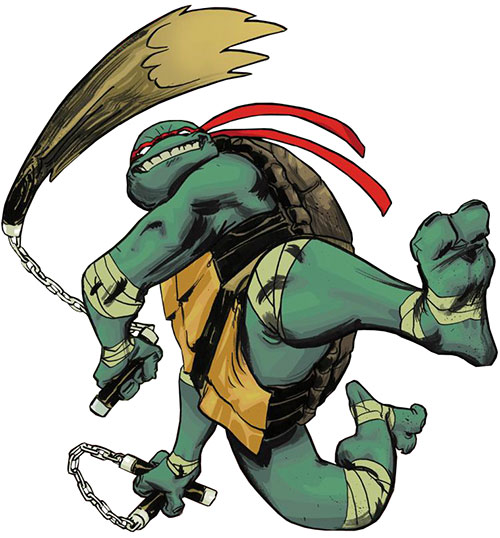 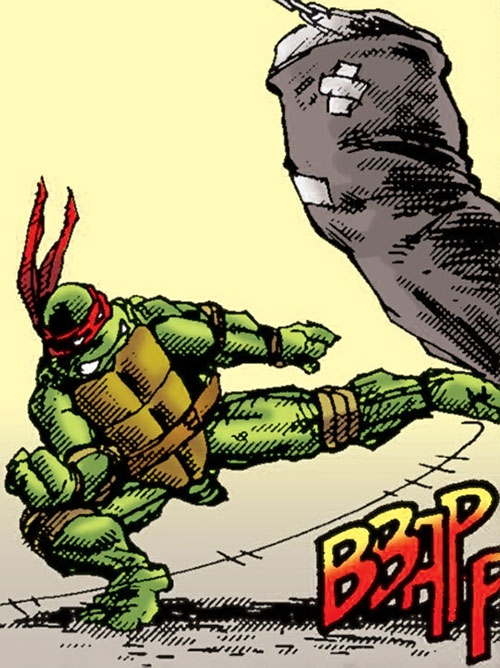 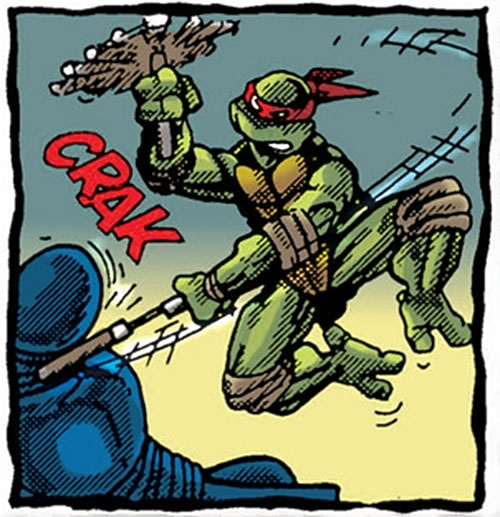