Osamu Tezuka (1928-1989) is probably the most seminal author in Japanese comics, and is often called “the father of manga” . Astro Boy, Black Jack or Kimba are among his creations.

His Metropolis manga, with Michi as its main character, was published in 1949. In this profile I generally refer to Michi as “he”, for in spite of being genderless, he takes male form for most of the story.

Michi’s visual designs is one of the classic examples of the influence of Walt Disney in Osamu Tazuka’s work.

Michi is an artifical being, given life by the omothenium sunspots the Red Party created.

Thanks to various secret apparatii Dr. Lawton placed within his body, Michi has “10,000 horsepower” superhuman abilities. By breathing deeply, he can convert the oxygen in his lungs into helium, allowing him to fly fast enough to easily overtake a futuristic jet plane (his method of propulsion is unstated). Gills within his ears permit Michi to breathe underwater.

However, it is his strength that is most notable. Michi is shown tearing the wings off a plane, then crumpling the plane and throwing it away as though it were made out of paper. He’s also seen breaking skyscrapers in half with one blow.

Bullets and Metropolis’ magnetic cannons prove useless against Michi. Even a lack of omothenium sunspots took nearly a day to destroy him.

For a synopsis of Metropolis, see the Wikipedia entry  before it gets pared down.

Michi was modeled after a statue known as “The Angel of Rome”, which is widely regarded as a masterpiece, with the most beautiful face in the world. As such, in either gender Michi has angelic features that charm many people who look upon them. People actually often mistake Michi for being a girl even when he’s in male form.

Since Michi’s meant to appear as a child of about 10 or 11, the most reliable way to tell if he’s in male or female form is by the length of his hair.

At first, Michi was an very charming child, quite innocent, brave, and pure of heart. Everyone he encountered grew to care for him quickly. Although he had been sheltered prior to Dr. Lawton’s death, he quickly embraced the life of a normal boy. 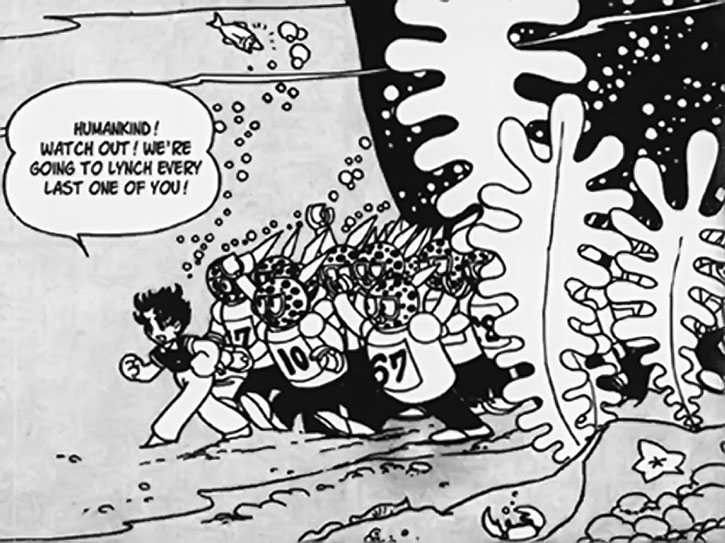 However, even the love of his friends wasn’t enough to mitigate Michi’s desperate desire to learn more about himself and his real parents. This became particularly true after he found out about his powers.

This longing eventually led to his abandonment of his friends and normal life so that he might wander the Earth seeking some trace of information about them. When by sheer chance Michi ended up on Duke Red’s ship, his desire to see the bad guys defeated dissipated the second Red seemed to know something about him.

After Duke Red revealed Michi’s true nature, the shock and despair of discovering that everything he had believed about himself was false and that he was not and could never be human, combined with learning about how cruelly humans had treated his fellow artificial beings drove Michi over the edge and filled him with sheer, violent hatred toward all of mankind.

Not even Kenichi, formerly his closest friend, was able to awaken any, well, humanity or compassion within Michi.

Michi is essentially genderless, and doesn’t appear to think of himself as male or female, or to particularly notice when other people refer to him as a boy or girl.

(One of his friends is being harassed at school)
Emmy: “I didn’t realize school was such a lonesome place… I’ll never come back again !”
Michi: “Emmy, no, you mustn’t leave ! Who did it ?! Who was picking on Emmy ?!”
(Michi grabs three bullies, flies up, and hangs them from the school roof by their shirts)
Michi: “Even if she lives in a slum, even if her sister’s a bad person, has Emmy done anything wrong ?! Well ?!”
Bullies: “We’re sorry ! Please let us down !”
Kenichi (watching): “How can I believe that’s an artificial being ? He’s a splendid human ! No, he’s more human than humans !”

(Duke Red reveals Michi’s true nature to him.)
Duke Red: “Michi! what an amazing coindicental meeting this is ! I’ve been searching for you for a long time ! When you were born, I was right there watching patiently. And I know all about your special powers !”
Michi: “Wha-what ?! If you’re my father, please say so !! You’re my father, aren’t you ?!”
(Michi embraces Duke Red, crying.)
Michi: “F-F-Father ! I so wanted to meet you…”
Duke Red (shoves him away harshly): “Hmph, ridiculous. I’m not your father !”
Michi: “Not my father !?” (Imploring) “Then who ?! Who in the world are my parents ?!”
Duke Red (Scornfully): “Hah hah hah hah ! You don’t have any parents, because you’re an artificial being !”
Michi: “Huh !?!”
(Michi collapses to the ground in shock)
Duke Red: “You’ve been a slave of the Red Party since you were created ! You were made to help the Red Party in its work !”
Michi: “…I’m an artificial being… yes, I see… I AM an artificial being !”
(Michi rises and glares at Duke Red)
Duke Red: “From now on you’ll follow my orders unconditionally – Why are you looking at me like that ?”
(Michi pounces on Red)
Michi: “H-How dare you ? How DARE you !? How dare you do this to me !? You villain !!”

“Humans ! I will not leave even one of you alive !”

(Addressing an army of his fellow robots)
Michi: “Did you see that ? The way they toyed with us ? That is the way humankind too will end ! Now it’s our turn to turn the tables and make mankind beg for mercy ! Everyone, advance on Metropolis !”
Robots: “To Metropolis ! To Metropolis !”
Michi: “Humankind ! Watch out, we’re going to lynch every last one of you !”

With T.O. Morrow and Profesor Ivo running around? Sure! It would be easy for one of their experiments to escape and make a life for himself before his true nature is revealed and he flips out.

Can the heroes somehow restore the innocent child the android used to be, or will they be forced to kill him in order to protect humanity? What happens if they do somehow restore his old self and then realize the sunspots that are keeping this child alive are also throwing the rest of the world into chaos ?

Bonuses and Limitations:
Flight requires Michi to breathe air, and so cannot be used underwater.

Advantages:
Attractive, Lightning Reflexes, Misc: Michi’s apparent gender may be changed by a switch in his throat. (Michi is unaware of this.), Misc: Although Michi possesses Self-Linked Gadgetry, the devices that give him his power seem to be so cleverly designed that they’d probably only be noticed via a medical examination.

Note:
Attractive isn’t sexual or romantic in nature, and is effective against people of either gender (“What a beautiful child !”).

Note:
After the truth was revealed to him, Michi rejected all of his former Connections as his SIA changed to CIH (Humans), and he gained Catastrophic Rage, as well as a High Connection to his army of rebellious robots. (But not Leadership, as they made him their leader due entirely to the fact that the was the strongest robot of all.) 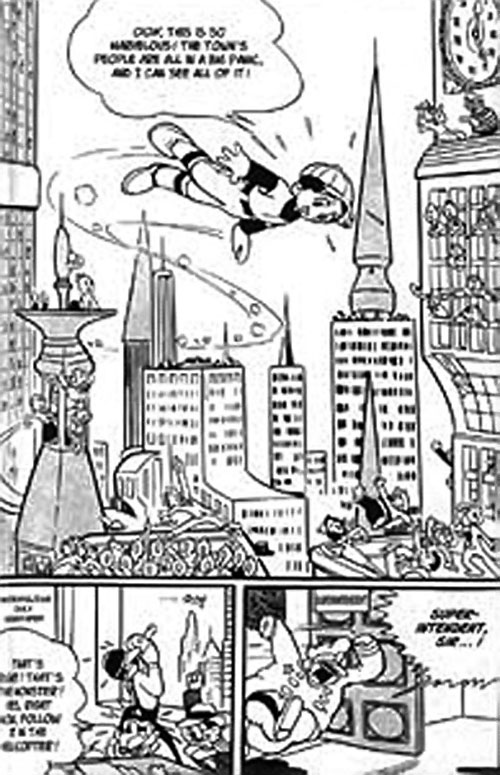 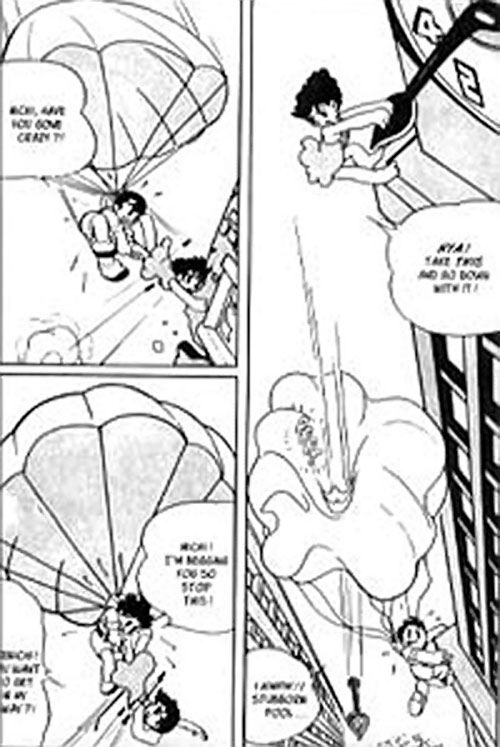 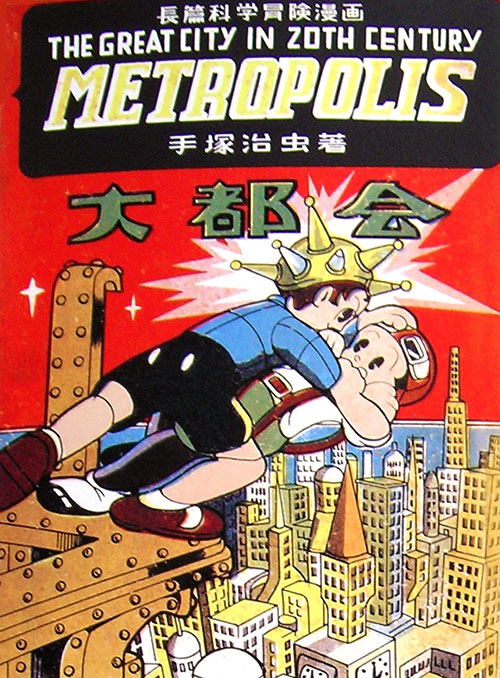