Extremely agile, Midnight Devil has an acrobatic combat technique. He is capable of superhuman feats of jumping.

His tail, over which he doesn’t appear to have any particular level of control when attached, can be detached at will. It then becomes a three foot rigid weapon. It also releases a gas on detachment, which can slow down those in proximity.

While his full origin is unrevealed, he claims to have died. Whether Midnight Devil was revived in some manner, or is, in fact, still dead, is not known. His current form, dark red skinned with white horns and a tail, does not appear to be a costume.

While patrolling New York he witnessed the kidnapping of Nikita Dragonryder. Devil arrived in time to rescue her partner, Rascal, who had been knocked unconscious. Rascal had been left floating to the ground in a parachute, and was chased by the mercenary Rottweiler. Devil accompanied Rascal to try to rescue Nikita.

Hail, hail, the gang’s all here

Finding the local warehouse used as a staging ground by the mercenaries, they burst in to find themselves surrounded by a small army of thugs. Yet they managed to hold their own until the other members of Rascal’s team, Strikeback (Purity, Sherman, Short Fuse and Jade Cobra), arrived.

During the chaos of the fight, Midnight Devil and Jade Cobra spotted some mercenaries. These were loading Nikita onto one of their ships. The pair managed to leap on board before it took off.

Misinterpreting one of Midnight Devil’s quips to mean that he could fly the vehicle, Jade Cobra proceeded to kill the mercenaries. Only then did she learn they no longer had a pilot. The plane came down near the Grand Canyon, with Doberman and some of his more loyal mercenaries soon catching up to them.

They fought the mercenaries, but were soon overwhelmed, and taken to Dragonryder Island.

He awoke to find Nikita arguing with her father, the notorious Mars Dragonryder. Mars was the one who had arranged the kidnapping. Devil found himself more of a guarded guest than a prisoner, and stayed close to Nikita as she learned the truth of where she came from. He kept an eye on her when she agreed to undergo a procedure which would restore her memories. 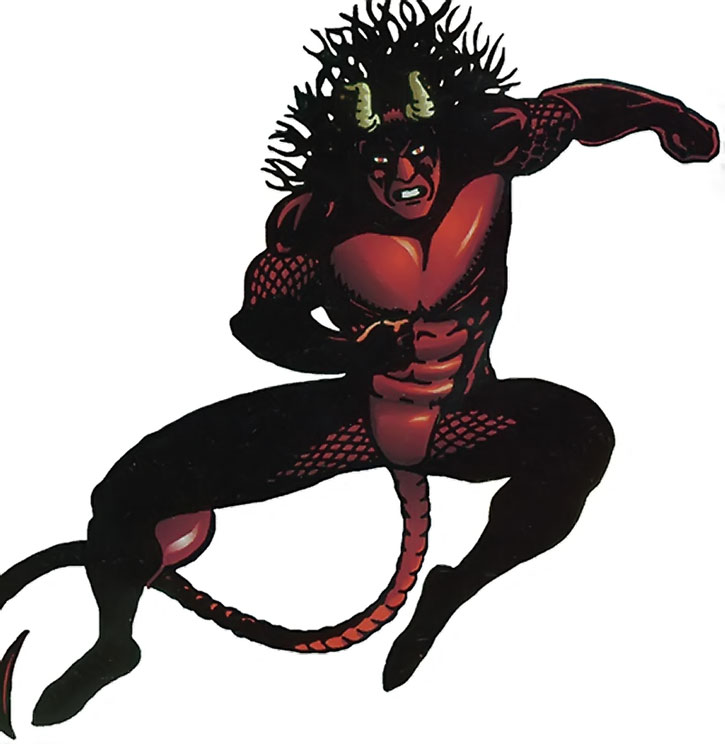 The rest of Strikeback arrived soon after. Their attack put the base on alert. It also accidentally turned off the barriers which prevented Monster X, the creature which had forced the Dragonryders from their home dimension, from breaking through. Monster X soon began rampaging in the complex.

When Strikeback reached them, they saw Midnight Devil standing alongside Mars. Nikita was strapped down with something being done to her. The team thus assumed that Midnight Devil had betrayed them (especially Jade Cobra, who had taken an instant dislike to him). Devil had to fend off Jade’s attacks until the situation could be explained.

Strikeback reluctantly teamed up with Dragonryder’s forces, to deal with Monster X, but not before it had killed Sherman.

The fighting done, Nikita announced that she’d be returning to her home dimension with her parents to find out where she’d come from. She promised to return.

Midnight Devil is later seen with the other members of Strikeback. So it seems that he joins the team at some point.

It’s unclear whether he’s in a suit, or whether he actually looks like that. But I’m inclined to think that’s supposed to be his natural appearance.

Quick-witted and cheerful, Midnight Devil wise-cracks his way through most situations. Yet he has an even-tempered manner, and is always ready to talk rather than fight.

When forced to fight, however, he’ll usually annoy his opponents with mockery, while leaping around them.

During his initial search to understand his new condition he met Deadman a few times.

They’ve worked towards an understanding, although Deadman still seems cautious around him. Midnight Devil believes that his ally may know more about his condition than he’s admitting.

Prior to the events covered in History, he doesn’t have the Connection. 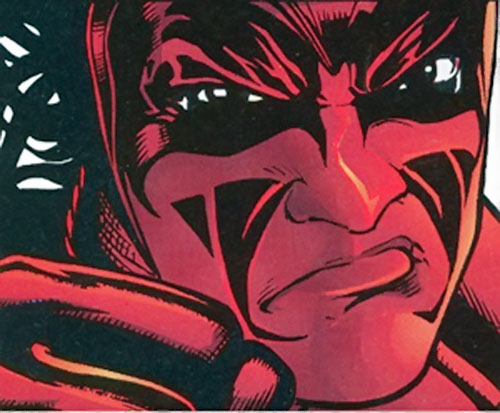