Midnight’s Fire repeatedly demonstrated the ability to jump inhuman distances and shatter Night Thrasher’s armour with his unarmed strikes. This leads one to strongly suspect that he has low-superhuman strength. At one point, he punched right through Night Thrasher’s skateboard (in DC Heroes RPG terms STR, Martial Artist, Unfettered Fist Schtick).

Some of his remarks also make it evident that he has an highly developed sense of smell – most likely superhumanly so.

Midnight’s Fire is a highly efficient acrobat and martial artist. He exudes raw physicality and confidence in his prowess. He’s quite able to engage superhumans in hand-to-hand combat. Rank-and-file human opponents are but an annoyance for him. He was seen doing hundreds of push-ups – with one hand, on his fingertips, with his body vertical.

Midnight’s Fire carries a number of spikes with a pommel at their base. He has used them to stab and slash as knives, as punch daggers, and as throwing knives.

While Night Thrasher was originally too afraid of Midnight’s Fire to spend Hero Points  against him. Once he overcame that fear and started tapping into his HPs, he turned Midnight’s Fire, once a grave threat, into a manageable opponent.

Less martially adept — and less heavily armoured — characters may not be so lucky.

Midnight’s Fire is, along with the Silhouette, the child of Viêt-Nam invasion veteran Andrew Chord. He was born as part of the Pact. The Pact was a centuries-long ritual that culminated in the birth of a generation that would have the potential to access great mystical power.

One of the requirements for the Pact ritual was that the gifted generation should be a merging of the East and West. Thus, when an American LRP team stumbled on the temple, hidden deep in Cambodia, they were invited to father children. In Chord’s case, the woman selected for him was the only daughter of Tai, the grand priestess of the temple.

Andrew Chord lost contact with his children when they were very young. But both the boy (who later named himself Midnight’s Fire) and the girl (Silhouette) stuck together. They grew up in the street, learning how to develop their superhuman powers. Both Midnight’s Fire and Silhouette thought that their parents had died when they were but babies.

In their teens, the super-powered siblings acted as vigilantes. They focused on fighting Asian-American street gangs. Thus they ran into young Dwayne Taylor, who was himself starting his career as a vigilante.

After a short misunderstanding (as Silhouette was making a drop for a sting operation), the three youths joined forces. They operated together for a few months. Taylor (who had begun to call himself Night Thrasher), gave them access to his facilities. Taylor and Silhouette even started a relationship during that time.

Ironically, the overseer of this base was Andrew Chord. He didn’t seem to recognise his children – but disliked Midnight’s Fire’s cocky recklessness and careless use of violence.

During another sting operation by the trio, a cop stumbled on the scene. Midnight’s Fire produced a throwing spike from his sleeve. Night Thrasher instinctively prevented him from throwing it, refusing to kill a cop. This gave time to a nearby gang member to open fire, downing the cop but being himself shot by return fire.

Silhouette was caught in the crossfire and shot in the back at point-blank. This seemingly killed her, but actually crippled her for life. Mad with rage and grief, Midnight’s Fire slashed Night Thrasher in the face and fled with Silhouette in his arms.

Abandoning his ways as a vigilante, Midnight’s Fire instead became a gang leader. He now saw himself as a protector for marginalized South-East Asian youths. His gang, the Concrete Dragons, became a force to be reckoned with. However, he always took great care of presenting them as a way to protect the neighborhood, a fraternal society.

Midnight’s Fire desire for vengeance against Night Thrasher still consumed him. Yet for years the two men didn’t cross paths. Taylor was afraid of Midnight’s Fire, knowing that the brash young man was faster and stronger than he was.

In 1990, Fire killed three policemen. He then left clues incriminating Night Thrasher, hoping to get the heat off him and avenge himself at the same time. Night Thrasher conquered his fear, and he and Fire had a showdown in front of Taylor’s supergroup, the New Warriors.

During this fight, Midnight’s Fire pretty much destroyed Thrasher’s armour. However, his dealings in illegal weaponry and cop killing were exposed. This turned the neighbourhood against him. Some of the Dragons, who were armed with heavy energy weapons, were defeated by the New Warriors. Lastly, Taylor discovered that Silhouette was still alive.

Seeing that his brother had turned power-mad, Silhouette rejected him as family and left the Concrete Dragons. Night Thrasher seemed on the verge to kill Midnight’s Fire, but instead slashed his face to give him a scar like his. Taylor then handed him over to the cops.

The Circle attempted to forcibly recruit Dwayne Taylor. But they were not faring well until Midnight’s Fire intervened and took down his former friend. Knowing Taylor well, Midnight’s Fire convinced him to work along with the Circle. He told him that they would learn more about his parents.

In Cambodia, Fire learned that he was the son of Andrew Chord and Tai was his grandmother.

The Folding Circle and the New Warriors ended up fighting along with each other at the Cambodian temple against Tai. As the fight ended, the Folding Circle fled in a stolen Quinjet. They left without the Left Hand, whose plan all along had been to hijack the power of the gifted generation for his own benefit.

Since none of the remaining members of the Circle could really pilot an airplane, their flight ended in a crash in Madripoor. The Circle quickly adapted to the highly criminal environment, and Midnight’s Fire took the leadership by default.

As he wrestled with the local mobs to gain control of more business, Midnight’s Fire still burned with the desire of avenging himself. As a result, he sent photos implicating Silhouette with the Concrete Dragons to blackmail her.

Both Silhouette and Night Thrasher went to Madripoor to track Fire down. This led to their entanglement in the turf war between the Folding Circle, Tiger Tyger and Aardwolf. Silhouette was kidnapped by Fire after Aardwolf ambushed her and Night Thrasher. This created a situation where she was forced to accept the help of the Folding Circle against Aardwolf in order to free Thrash.

While Midnight’s Fire seemed threatening, he didn’t lift a finger against his sister. That was despite her accusations of :

Ultimately, the Circle, who was secretly allied with Tiger Tyger, used the damage done by Night Thrasher to Aardwolf’s enforcers to bring Aardwolf down. The feral crimelord fled to Tiger Tyger, with whom he thought that he had an alliance. But he had been played and fall in the Folding Circle’s hands.

The Folding Circle was left in a precarious position, having alienated two key players in Madripoor and having been publicly defeated once.

Proud, reckless, fiery-tempered, confident, very physical. His taste for power and his desire for revenge eventually twisted him. As a result, he warped his once-sincere stance about protecting “his people” against the establishment and crime. This gave birth to what was basically another mob and protection racket.

He was easily corrupted by riches and the feeling that he had pull and mattered.

Midnight’s Fire considers Taylor to be his “mirror brother”. Deciding he was a sort of evil twin of his former best friend, comrade-in-arms and the lover of his sister helped him rationalise his own fall.

Thus, in his mind’s eye he hadn’t been corrupted. He was simply fighting against everything Night Thrasher wanted out of love for his poor sister, conveniently forgetting that he once held the same values.

After Silhouette renounced him as her brother, he was very bitter. But his great self-confidence and pride softened the blow.

Midnight’s Fire remains unwilling to face the mistakes he made in his past. He is rushing forward into the future with ambitious, vicious plans to make himself a big man with a large power base, using both violence and guile. Yet he lacks professionalism, being reckless in his manoeuvring and not caring much about the consequences of his will to power.

Drawbacks:
MIA toward Avenging himself against Night Thrasher. 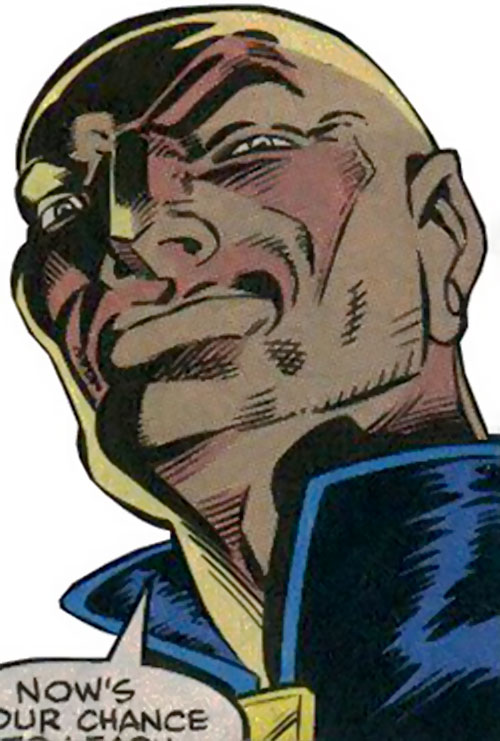