Midnight Men was a 1993 mini-series by Howard Chaykin for Epic, a Marvel Comics imprint.

I seem to remember that it had originally been pitched as the script for an action/thriller movie. Then became a comic book.

In any case, this vigilante story has a definite cinematic flow to it. But it stays relatively realistic and low-powered.

Pasternak is a top-flight cat burglar. As such, he’s able to circumvent expensive security measures and to crack open even highly secure safes.

Since he often operates at a height, he is skilled with climbing and rappelling.

He’s also a charming, handsome, witty, personable guy. He likes to be liked and possesses a certain aplomb — or, rather, chutzpahExtreme self-confidence or audacity — and grace under pressure.

Mr. Pasternak is a social animal. Even in the dangerous spheres he works in, people trust him… to an extent. He also uses these talents for social engineering and investigation.

Though he never seemed to consider himself a good fighter or man of action, Barnett handles himself well in a fight. He is surprisingly good and resourceful in combat.

Yet he knows when he has bitten off more than he can chew. Such as trying to take on three persons – or on a much bigger guy.

When adrenaline starts flowing he’s quite athletic. In this state he may pull off some stunts that look mighty dangerous. 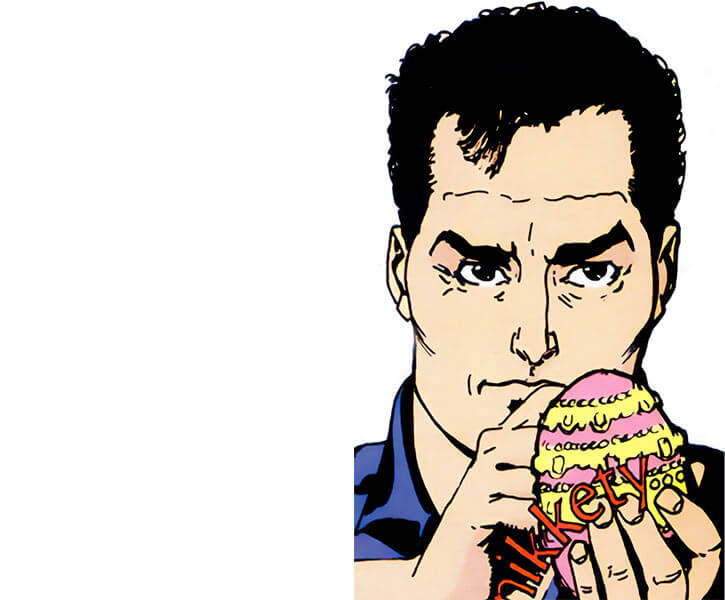 Let’s go with the obvious pick.

Well, “obvious” if you’re into bass-heavy, groovy 1980s Australian pop music. Which on second thought might be niche.

(Though apparently this tune was a 1984 hit in Germany, so there’s that).

Barnett Pasternak is a professional safecracker and cat burglar. He has strong ties with the Jewish New York City mobs.

His father Buddy Pasternak also was a thief, and Estelle Pasternak seemingly was a full-time liberal activist. Barnett admired his father, and always sought to follow in his footsteps.

The Pasternak family has been damaged by issues of alcoholism. Buddy was a heavy drinker and, emulating him, Barnett hit the booze for years. This likely played a role in Estelle divorcing Buddy.

Estelle ran an Alcoholics Anonymous-style support group. Barnett eventually became a member. It worked – by the beginning of the story, he has been dry for a year.

In 1993, Buddy was killed by a serial murderer. The killer had been dubbed “the Surgeon” by the tabloids. Because he extracted the thyroid gland of his victims.

Now in his 30s, the distraught Barnett flew to L.A.. He was reunited with his mother – and with colleagues of his and his father’s. These chiefly were Jewish operators and gonifsA shady person with underworld connections, but who’s not an outright criminal.

He also dated one Kim Ryan. Kim’s mum Rosalyn was a fixture of the Jewish underworld Angeleno scene.

Although he was to fly back to NYC for a job within days, Pasternak was hired by his friend Lorraine (his father’s ex) for a local job. One hundred grands to crack a safe and steal a Fabergé egg  .

The end client was Dwight Youngblood, the illegitimate son of ex-movie star and influential power broker Noble Youngblood. Youngblood claimed that he owned the egg.

The theft was successful. But as the three criminals were about to leave one of LA’s urban legends, black-clad vigilante the Darkangel burst into the room. Running away with the egg, Pasternak accidentally defenestratedFalling off a building through a window himself.

Throwing a swingline, the Darkangel swept in and grabbed Pasternak in mid-air. But in doing so, the rescuer accidentally impaled himself to death on a broken flagpole.

The Darkangel was a part of an unbroken tradition of urban vigilantes. These had been trained and equipped by the manager of a trust fund called Midnight Men, Inc..

MM, Inc. had been set up in the mid-1800s by a gold rush miner who had struck it rich. Out of perceived altruism, he became an independently wealthy vigilante – and ensured there would always be such a Midnight Man. 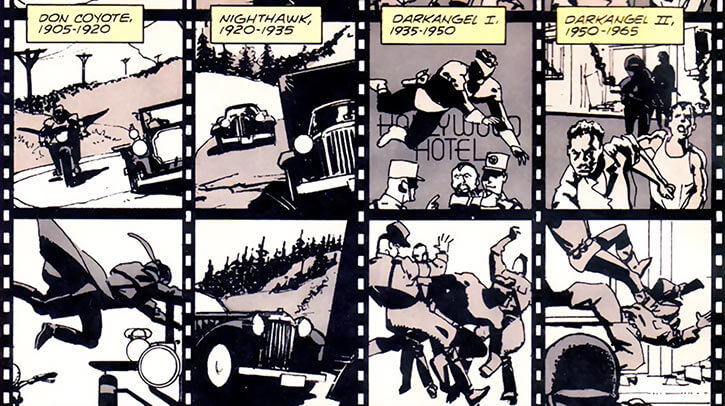 Darkangel IV was a man named Kevin. An alcoholic, he had been drinking before going into action as Darkangel. This likely is what killed him.

Darkangel III had been Virgil Lockhart, a lawyer. A crippled leg had forced him to retire from the field, and instead operate the Mightnight Men, Inc. base and fund. He also recruited and trained Kevin.

Coincidentally, Kevin also had been Estelle Pasternak’s lover. And she knew Virgil as a fellow liberal activist. They often worked together in defending neighbourhood causes.

Lockhart, in his Darkangel costume, kidnapped and interrogated Barnett – thanks to a tracer in the stolen Midnight Man costume. He was investigating Kevin’s death.

Mr. Lockhart had also been investigating the Fabergé eggs. And already knew that these held microfilms with information in Russian.

Pasternak escaped. But he soon overheard Lockhart say something he had also said as the Darkangel.

To prove that Lockhart was the Darkangel, Barnett Pasternak broke into his legal clinic. He did find stockpiles of equipment. And memorabilia about a century and a half of Midnight Men, Inc. activities.

Lockhart came back and they fought. The older man eventually managed to hold Pasternak at gunpoint. 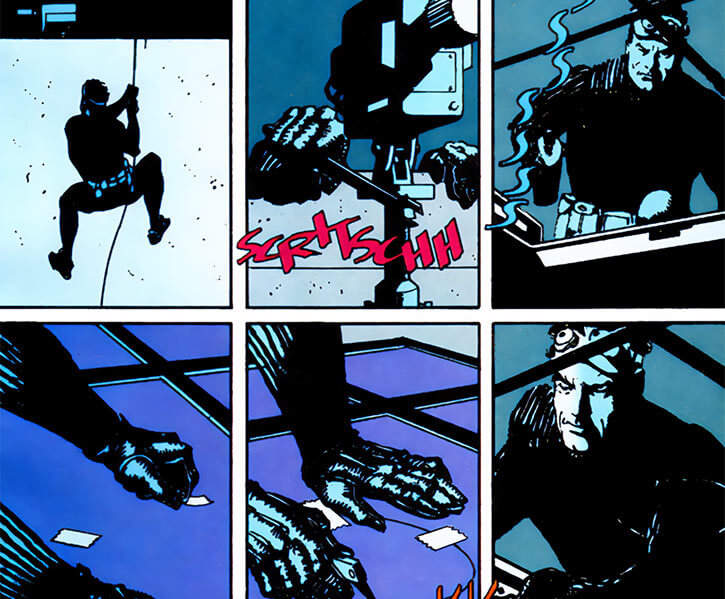 By that point, Lockhart knew a fair bit about the plot around the elder Youngblood and the Fabergé eggs.

The info on the microfilms described an experimental, unethical anti-ageing treatment. Determined to have it at any cost, the older Youngblood had procured the microfilms, then the Russian researchers who had designed the treatment.

The Surgeon serial killings were part of this. One of Youngblood’s enforcers was procuring thyroids as research material for the ex-Soviet medical torturers. Thus, Noble Youngblood was responsible for Buddy Pasternak’s death.

Kim Ryan was also caught in the plot. As an immigration official, she had been approached by Youngblood to “facilitate” the entry of the Russian doctors. But Kim had refused, then launched an investigation in Noble Youngblood’s activities.

As Virgil and Barnett now realised, this meant that Kim would likely be murdered by The Surgeon.

Low on options, Virgil Lockhart offered Barnett Pasternak 50 grands to become the new Midnight Man. But to his own surprise, Pasternak was more interested in rescuing Kim than in the money.

The thief took the offer, and the Darkangel equipment allowed him to save Kim in the nick of time. After fighting off The Surgeon and his helpers, Pasternak and Ryan retreated to Lockhart’s base.

But meanwhile, Dwight Youngblood slew Barnett’s friend Lorraine. He then turned the murder into a Surgeon killing.

Wearing the Darkangel body suit and he distinctive El Lobo bandanna mask, Pasternak assaulted Dwight Youngblood at a bar. But Youngblood was stronger. He captured Barnett and took him to his father Noble Youngblood.

Seeing that the elder Youngblood did not trust his son, Pasternak pretended it was all about the payment for the Fabergé egg theft. And in fact, Dwight had never paid Barnett or Lorraine.

Disgusted by his son’s poor business manners, Noble Youngblood gave Barnett the money. Plus what had been owed to Lorraine. But he demanded the microfilms.

Pasternak tried to negotiate. But Youngblood was all too willing to murder Pasternak’s and/or Ryan’s relatives and friends.

Caving in, Barnett took the Youngbloods to the Midnight Men, Inc. base, where the microfilm was.

Once at the base, Barnett grabbed Kim to run away with her. But he couldn’t fully betray Mr. Lockhart. He flung a shuriken into Dwight’s wrist, to prevent him from gunning Virgil down.

As Barnett and Kim ran, Virgil engaged the Youngblood father and son in a gunfight. But Dwight produced a disposable rocket launcher from their car, and blew up the legal clinic.

Lockhart was reported dead. But the corpse the authorities found was actually Kevin’s. Virgil had been keeping it in cold storage until he could dispose of it.

Kim was recaptured, though Barnett managed to escape.

Reflecting, Barnett decided to follow in his mother’s footsteps – rather than his father’s. He gave Estelle an airplane ticket and the Youngblood cheque. Then Pasternak became the Midnight Man, and stormed the Youngblood home.

The Midnight Man managed to rescue Kim, then destroy the two copies of the formula. He also killed off the Russian doctors, whose track record had been compared to Mengele’s  .

Kim and Barnett fought their way out. They were nearly stopped by Dwight Youngblood… until Virgil came to the rescue. Estelle, who had not left the country and now worked for Virgil, then got everybody away.

Meanwhile, her son was reflecting on his new life, his newfound conscience as he was stepping away from emulating his father, and what it meant to be the Midnight Man. 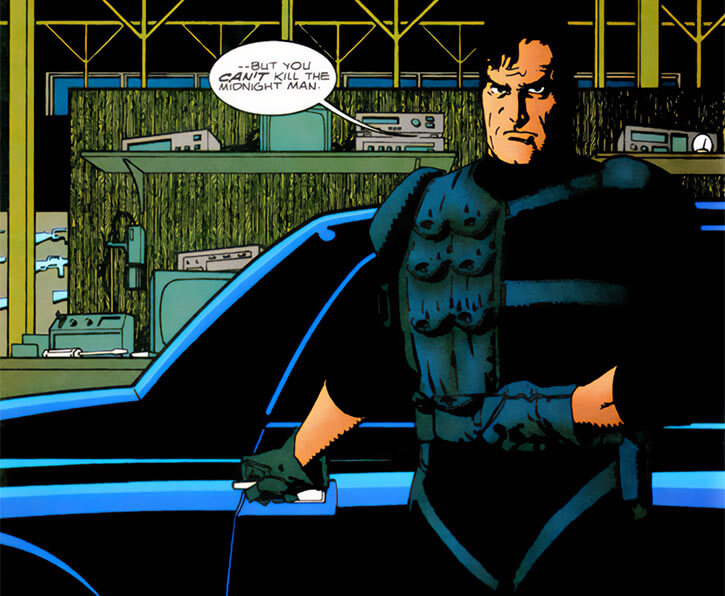 Originally Pasternak was a smooth rogue, suave operator and witty thief. He was fascinated by making very technical, very illegal pursuits look easy – just like his father did.

He enjoyed showing off his B&E and safecracking-fu. And being a highly reputed professional who could acquire whatever he wanted.

However, Barnett did not consider himself a crook. In his view he was much more an artist than a squalid and violent criminal. He seemed proud of doing his job with no collateral damage.

Though he pretended that it had not affected him, Pasternak was hurt by the sudden death of the father he idolised. He was left without a role model, making his criminal activities a tad meaningless.

Then he gravitated more toward his mother’s humanitarian ideals. Discovering the virtues of being a hero in Estelle and Kim’s eyes, he started developing a conscience fairly quickly.

This is when he decided to start using his skills as the new Midnight Man, and to be a full time hero.

Barnett is not a killer, and will almost never engage in cold-blooded murder. He still sees himself as an artist, not a thug. Ideally, he works using subterfuge 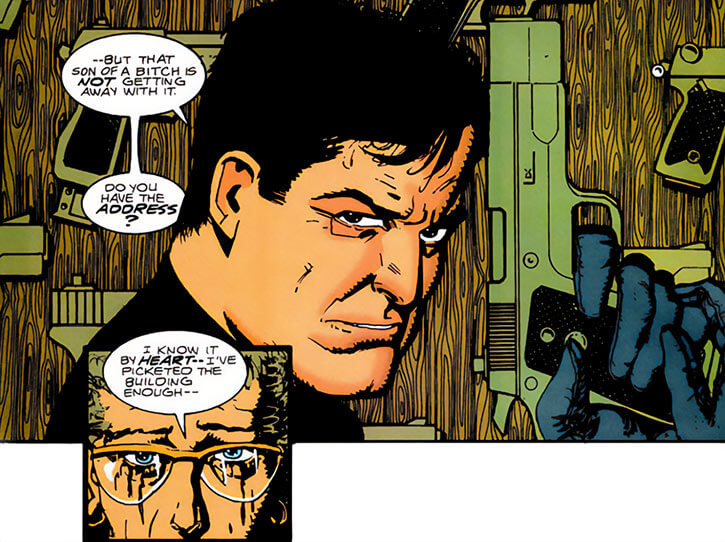 “I watched [my father] boost that [toy] sword — in broad daylight. That’s when I knew what I wanted to be when I grew up.”

“You can’t kill the Midnight Man.”

(Ogling at Kim’s cleavage) “Y‘know, when I look at you — I know how Genghis Khan felt, with Western Europe laid out in front of him.”

(Reusing Lockhart’s chatchphrase) “Do not mistake honour for weakness.”

Mistrust, Misc.: Pasternak is a former alcoholic and has to be careful around booze.

Barnett almost always wears the COSTUME and packs a half-dozen Pellets. But his Gadgets loadout varies from outing to outing.

Source of Character: Epic’s Midnight Men Limited Series (1993), which take place on a slightly cinematic version of our Earth.