M’Nai is a secondary Master of Kung-Fu character, who appeared in one notable story but was killed at its conclusion.

Then he promptly and unexpectedly returned as an undead in an Avengers story, and from there had a curious career as a revenant.

Midnight was the equal of Shang Chi, himself the greatest living master of kung-fu. In fact, he was considered slightly better in empty hand combat – perhaps because of his greater height and weight. But Shang Chi was slightly better with weapons.

Another set of world-class talents was M’Nai’s affinity for darkness and silence. He was practically undetectable through normal senses when operating in the darkness or approaching from behind. He also had peak human night vision.

M’Nai was born in a village somewhere in Africa. This place was in the thrall of the dreaded Fu Manchu. Special mushrooms were being grown there to further the plans of the devil doctor. However, Britain’s MI-6 service learned about the village. They raided it, killing many of Fu Manchu’s servants and setting the crops on fire.

Fu Manchu himself happened to be nearby and came to examine the damage. During his inspection of the burning village he spotted a crying orphan, who had been hideously disfigured by the fires.

The village’s chief, Fu Manchu’s servant, was about to execute the infant for disturbing them. But the devil doctor stopped his hand. He had noticed that M’Nai was not shedding tears, but crying out of hatred for whoever had deprived him of his parents.

Hatred is the path to the dark side

Seeing much potential in such hate, Fu Manchu brought M’Nai back to China. The boy was to be raised with the same class as his own son, Shang Chi.

M’Nai perpetually wore a full mask to hide his disfigurement. But despite his handicap soon proved to be one of the very best pupils along with Shang Chi. Both boys grew close after they fought a duel at age seven. They came to consider themselves as best friends and eventually brothers.

During this secluded life of constant training and education, some wine was stolen from the reserves of the monastery. Fu Manchu accused M’Nai of the deed, and sent his brother Shang Chi to “arrest” him. They fought, as M’Nai rebelled at this injustice and Shang Chi sought conciliation but obeyed their father.

After they beat each other up at length, M’Nai persuaded Shang Chi to ally with him to catch the real thief. Which they did.

I kill at the devil doctor’s will

Later, as an adult now wearing his full costume as Midnight, M’Nai was sent by Fu Manchu to enlist brilliant Vietnamese scientist Half-Face. After breaching Half-Face’s automated defences, M’Nai made the scientist an offer one should not refuse.

Yet the embittered Half-Face rejected him, as he would serve no-one. He then explained his defiance by telling him about the loss of his family in war, his disfigurement and his fate as a man who had lost everything. Empathising for a man whose life tragically matched his own, Midnight left.

When Shang Chi defected from his father’s service, Fu Manchu sent M’Nai to Manhattan for a duel to the death. Brother clashed against brother — the two greatest living masters of kung fu on Earth.

The fight brought them on top of a construction crane. Through reflex action, Shang Chi swept Midnight’s foot, making him fall. Before the man in black could control his fall, the hook of the crane caught his cape and broke his neck.

Midnight’s body was procured by Kree spies, apparently before an autopsy could take place. The corpse would decades later become Midnight Sun.

M’Nai usually sets his hat and cloak aside when entering a fight. Under that he wears a black, featureless jumpsuit covering him from head to toe, with only two eyeholes. Through his face was said to be a vision of horror, it was never actually seen. Even by Shang Chi, and even unto his death.

Early on, it was thought possible that Fu Manchu had lied about how bad the disfigurement. But this now seems unlikely. The Silver Surfer was, much later, shocked by the unmasked appearance of a superhuman clone of M’Nai.

Set apart by his terrible disfigurement and his negritude , M’Nai was the equal of Shang Chi in the martial arts. Perhaps due to his reclusive and extremely disciplined nature, he was wiser and slightly more mature than his adoptive brother. At least before Shang Chi defected.

While M’Nai hated injustice, he was as deeply in the thrall of Fu Manchu as any other servant. Or arguably more, as Fu Manchu had accepted him as his son. As he never went through Shang Chi’s experiences and did not have as keen an intuition, M’Nai remained convinced Fu Manchu was a good and just man struggling to save a decadent world.

“I warn you, my brother — remain in your light, and come no closer to the darkness which is mine.”

“No my brother, you are wrong. It is not weakness I fear… It is the submission to injustice ! And it is injustice I will fight – to my death !”

“No, honorable one. Everything I am may be laid to your wisdom and generosity. Without your intervention, I would be dead — or, at best, an uneducated jungle savage ! I am your slave, now and forever. I will kill [Shang Chi].”

“In the outside world, my brother, men hate Fu Manchu and his glorious work, just as they hate ugliness, disfigurement and men from foreign lands ! I shall never walk a path through such filth !”

“Hate drives my attack, my brother — hate that twists the already-twisted face under the mask into a sight that could kill you in itself ! You spoke of love before — for you and your father — but love is not mine to have, let alone to give ! You eased my days as a youth, yet I do not need you for the remainder of my days ! I need no one ! I am alone ! I understand it now ! I am no man like other men ! I cannot be that ! I am a weapon !”

Bonuses and Limitations:
Ultra-vision is limited to normal darkness, and is Form Function.

Note that Shang Chi has continued to grow since his early confrontation with Midnight. But back then, their stats were about identical, except for the HPs and Midnight’s Thief (stealth).

Dark kung-fu masters from out of time and death !

Midnight was part of the first Legion of the Unliving. Those legionnaires were pulled from the timestream, and Midnight in particular was picked in 1973, moments before his death.

However, like seemingly all members of all Legions — time-displaced or undead — the Legionnaire Midnight did not seem as powerful as the real one. My personal hypothesis would be that those guys were actually Space Phantoms.

“Midnight” had the following stats:

Bonuses and Limitations:
Ultra-vision is limited to normal darkness, and is Form Function. 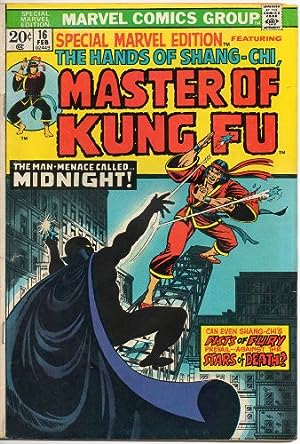 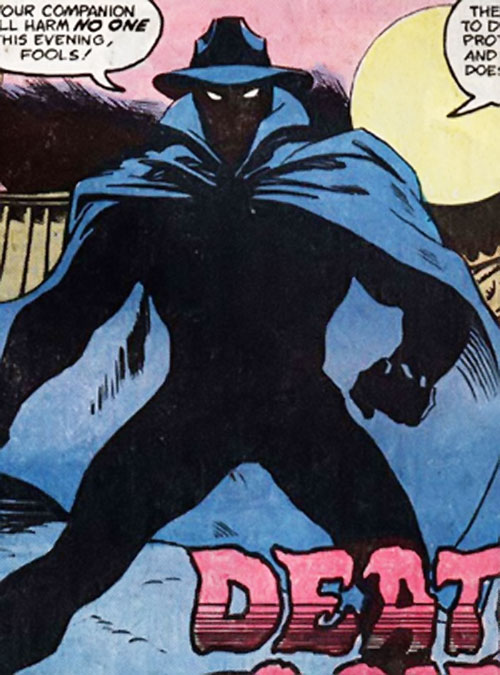 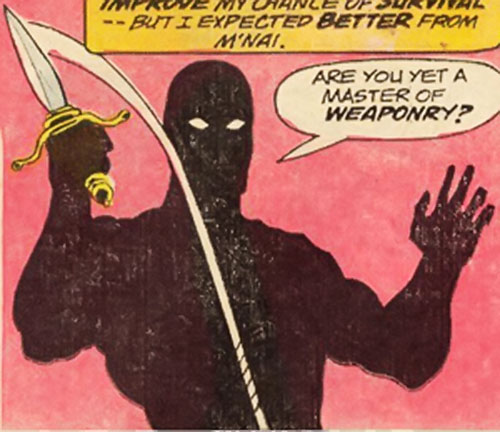 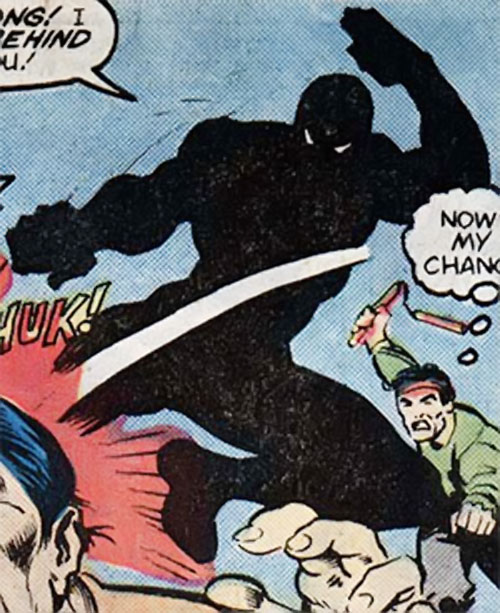 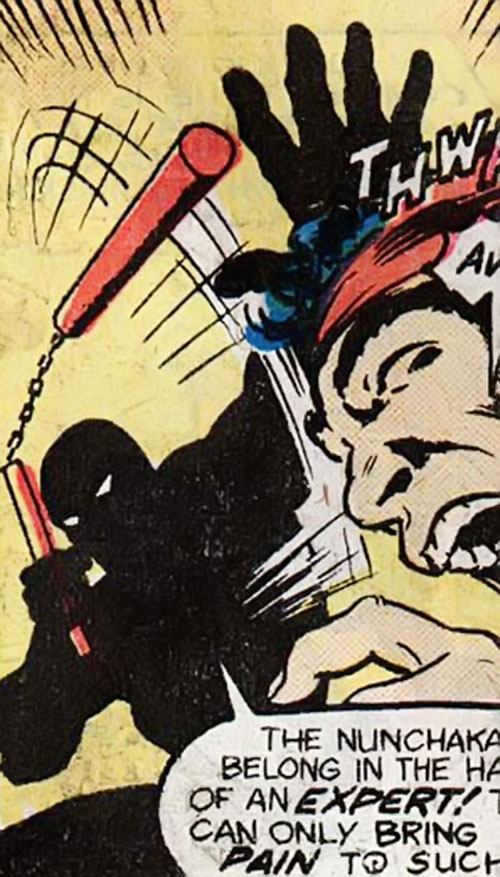