Midnight II is an excellent thief, as well as a professional-level athlete and martial artist.

He later was turned into a superhuman combat cyborg – see the game stats section for more about his capabilities.

Jeff Wilde is the son of the Midnight Man, Anton Mogard, an old opponent of the Moon Knight. He knew who his father was, but he never saw him during his early life. However, Mogard would send checks with no return address to support the raising of his son. Although his mother disapproved, Jeff began collecting press clippings about the exploits of the Midnight Man, whom he considered to be a genius.

When Wilde was 16, he finally met his father – but in an hospital. The chemicals which had altered the Midnight Man’s face had given him cancer, and he was dying. During the time they could spend together, Mogard told his son everything. He even taught him his secret techniques and transmitted his experience as a master criminal.

Wilde chose to wear the costume of the Midnight Man as the second Midnight (Midnight I being the now-deceased master of kung fu called M’Nai), but not as a villain. While he started by committing numerous burglaries in high-security Spector holding, his goal was too attract Spector’s attention. Wilde knew from his father that Marc Spector was actually Moon Knight.

After narrowly escaping the Moon Knight during a pursuit; Midnight II showed up at Spector’s home. He offered to become his partner in adventure.

Spector was less than enthusiastic at the idea. He mostly treated Wilde as an idiotic, bumbling kid whom he hoped would get out of his way but couldn’t manage to keep down.

After a week or so, despite Moon Knight’s warning, Wilde got involved in his investigation into the Secret Empire. During a battle with this dangerous conspiracy, Jeff took a force blast from a Secret Empire power dagger. The impact destroyed much of his body and nearly killed him.

Moon Knight sought to rescue Jeff. Eventually he captured the Empire’s head man, code-named Number One. He insisted that Midnight had died as a result of his injuries. Thus, Moon Knight stopped his search for his friend.

In fact, Wilde had not died. He had been made the subject of a cruel experiment. The Empire wanted to construct an army of cyborg super agents and Wilde was to be the prototype. He was used as a Guinea pig to see how much he could endure both physically and mentally. He also served as a test bed for more and more powerful weaponry.

A pain-inducing device was wired to Wilde’s spinal cord to insure his cooperation and modify his behavior should the need arise. Wilde did not wish to serve the Empire at first. But eventually, seeing their open aggression as more honest than what he had come to view as Moon Knight’s false professions, he relented.

His first assignment for the Empire was breaking physicist Elliot Franklin out of jail. Franklin’s services had been retained by the Empire to provide them with more advanced weaponry and to better enhance cyborgs like Midnight. It was while freeing Franklin that Midnight first encountered the super hero, Darkhawk.

During a battle which also involved Spider-Man, Midnight was temporarily captured and unmasked. Spider-Man had known Midnight briefly before his conversion, but believed he had been killed. Distracted by both Wilde’s story and a sneak attack by Franklin, the heroes allowed Midnight and the doctor to escape.

Spider-Man contacted his fellow Avenger Moon Knight and informed him that his former partner was still alive.

We serve the Secret Empire

Here they met up with the Punisher. Together the four battled upwards of 15 standard Empire soldiers, three armored hired-guns called the Seekers, and Midnight. After a brief exchange, the Empire’s forces pulled out.

But eventually, Spider-Man, Moon Knight, Night Thrasher, and Punisher were able to track Nova’s helmet transceiver signal. This is how they breached the Secret Empire’s main headquarters located on Manhattan’s Upper West Side.

Meanwhile, a conspiracy within the Secret Empire, fronted by one Lynn Church, enlisted Wilde. They also neutralised his pain-inducing compliance device. In the ensuing coup attempt, Number Seven was killed.

Fall of an empire

The Council of the Secret Empire was forced to flee, but not before the Punisher had overpowered Number Three and hidden on-board their escape rocket. Disguised as Number Three, Punisher found Nova and sabotaged the power shackles which were holding him. This allowed the heroes to regroup and attack anew.

Meanwhile, Lynn Church revealed that she was the first of the Empire’s cyborg soldier and headed the Empire’s last stand. Church, Midnight, the Seekers, Eliot Franklin in his new Thunderball armor, and a slew of heavily-armed Empire thugs faced off against a team of heroes. These included Spider-Man, Darkhawk, Nova, Night Thrasher, Punisher, and Moon Knight.

When Midnight learned that Church allowed herself to be turned into a cyborg voluntarily, he became disillusioned and quit the fight. Church then revealed that she had not removed Midnight’s pain-inducer, but had merely changed the frequency. Seeing a chance to grab some power for himself, Thunderball tried to get the pain-inducer away from Church.

Midnight decided he would rather die than continue being a slave to pain, or to anyone who could control that pain. Thus, he started smashing the building’s support columns.

Church attempted to stop him while the heroes gathered up their fallen allies and enemies alike and head for safety. Thunderball and the two cyborgs appeared to have been crushed to death under tons of debris.

However, Thunderball had been spared by a support column. He managed to hammer his way out of the wreckage using Midnight’s and Lynn Church’s robotic arms, still locked in their”death grip. Spider-Man delivered Midnight’s epitaph, but as his body was never recovered, Midnight may not be gone for good.

At first Midnight was an overenthusiastic kid. He had uncertain morals, but a lot of confidence in himself and his worth. He was out to have fun and be a costumed guy, but wasn’t clearly a hero. Even early on he was starting to be tempted by the easy money of villainy, such as his father’s.

Wilde tended to take irresponsible, exuberant risks as if living in some cheap action movie. He tried to deliver his best one-liners as a cool, funny tough guy. A number of those were pop culture, slightly geekish references.

As a cyborg, Midnight was distraught and brooding the loss of his humanity. He hated Moon Knight for his perceived betrayal and somehow came to accuse him of the death of his father.

(Noticing that his car is being tailed) “This is gonna be great ! Warp speed, Mister Sulu !”

Equipment:
Midnight drove a black Corvette with a MIDNITE vanity plate and had a swing line [BODY 06, Note : 3 APs long].

Midnight II as a cyborg

As a cyborg super-agent of the Secret Empire, Wilde had the following stats :

Drawbacks:
Minor Rage, SPR (Midnight II has a remote-controlled pain implant from the Secret Empire to ensure his obedience). 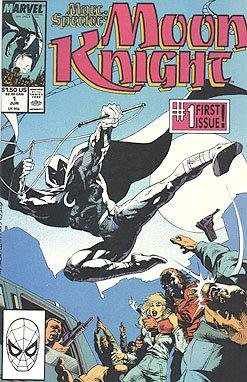 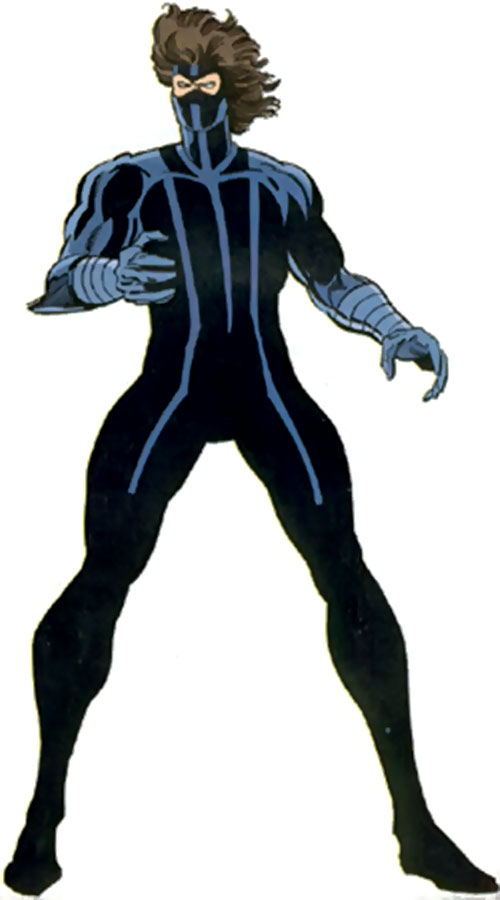 Before becoming a cyborg : 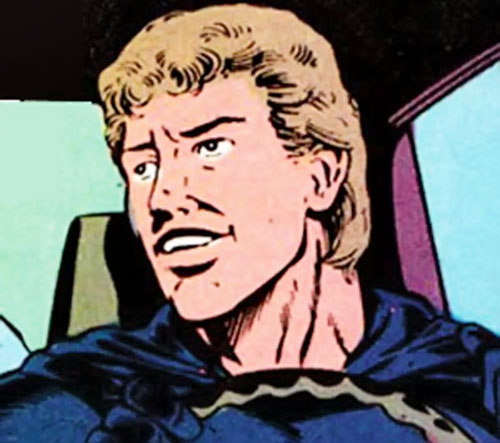 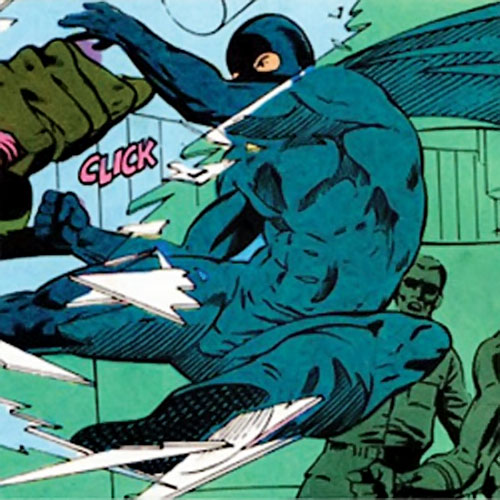