The Midnight Sun clone magnifies Midnight’s strength, speed, coordination, martial skills, etc. to a tremendous degree. Even in the depths of space, he’s capable of overtaking the Surfer himself with unbelievable skill, speed and precision. At least as long as the Surfer is not spending Hero Points  and Midnight Sun is.

Midnight’s affinity for darkness has likewise been magnified. He basically turns invisible in the dark – even to the Surfer’s cosmic senses.

His mentally activated disks can each propel him at formidable speed in the direction opposite that which it is facing. Midnight Sun uses them with great coordination, as if space was an infinite series of vantage points he can bounce off of, pivot on, leap from or stand on. This agility would likely prove disconcerting to somebody not experienced with this form of combat.

The corpse of the master martial artist M’Nai, also known as Midnight, was soon stolen by a Kree cadre of spies.

Those spies were employed by Kree scientist Kar-Sagg as part of a special program. Its goal was to study the bodies of the Earth’s “marvels” — superhuman or highly gifted costumed adventurers. The corpses were stored in a base called Bodoni-20.

This small, somewhat flakey program may have been motivated by fascination for humanity’s genetic potential, as it contrasted with then-stagnant Kree DNA.

When Kar-Sagg was ordered by Imperial Minister Nenora to kill the Silver Surfer, he reanimated the corpse of Midnight. His reasoning was that Midnight was not only a great fighter but also a master of darkness. The latter could be used in a plan to counteract the Silver Surfer’s Power Cosmic, which Kar-Sagg theorised came from the stars.

Midnight’s dead brain was reanimated. Kar-Sagg used hypertronics programmed with a simple and convenient personality. That and a body seed, carefully tailored to conserve Midnight’s motor skills, were the base of a superhumanly powerful clone of the deceased martial artist.

When a new major battle in the Kree/Skrull war erupted, the Silver Surfer tried to stop the Kree fleet. They launched Midnight Sun against him. The reanimated master of kung-fu outfought the Surfer. But despite his monstrous strength he did not have the raw power necessary to truly batter his cosmic opponent.

Midnight Sun was mostly meant to keep the Surfer occupied. Meanwhile, a starlight-deadening dust cloud was spread around the two combatants. It would theoretically cut the Surfer off from his source of power.

In the darkness that ensued, Midnight Sun was invisible even to cosmic senses. He resumed beating the Surfer up. But his opponent focused on the electronic emissions of Midnight Sun’s disks and finally nailed him with a cosmic blast. The Surfer then used his superior strength to hold the clone and fly outside of the dust cloud. 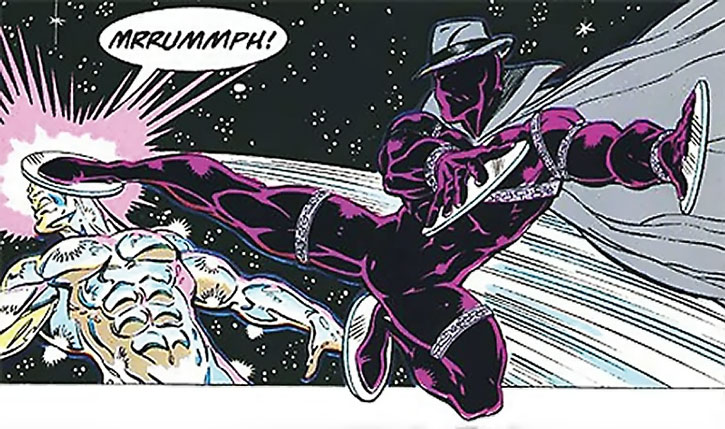 Without support from the Surfer, the Skrull forces had been losing to the Kree. They fell into a rout after their brilliant commander, the pirate Reptyl, was backstabbed by the traitor Clumsy Foulup. Hit by Kree batteries, the Surfer dropped Midnight Sun. M’nai’s clone was caught by a tractor beam and repatriated.

Though the Surfer was forced to fight alone, he eventually defeated the Kree offensive. It was too late, though. The Skrulls had lost far more military assets than they could afford. Even the Empress S’Byll barely survived the battle, masquerading as a space debris to save herself. The delaying action fought by Midnight Sun had been decisive.

Midnight Sun was then redeployed with the defences of the Kree capital world, Hala. That was in case the Silver Surfer would come and attack. And this is exactly what occurred within days of the previous battle.

The Surfer taunted Midnight Sun to fight him alone, which his opponent thought was ridiculous. But the clone’s programmed compulsion to fight and destroy the Surfer overrode his tactical wisdom. It forced him to fly out of the Hala defensive perimeter to engage the silvery stalwart.

This time the Surfer, who was familiar with Kree science and understood his opponent’s nature, was ready and defeated him. While the Kree defenders were watching the fight, the sneaky and superskrullianly powerful S’Byll sabotaged their guns.

The daring raid by the Surfer and S’Byll took them all the way to Kree leader Nenora, whom S’Byll exposed as a renegade Skrull impostor. This devastating revelation ended this phase of the war.

Back to the lab again yo

Midnight Sun was recovered by Kar-Sagg and his staff. They were disappointed in his performance and perplexed that he was recovering his ante mortem memories. They decided to reboot the clone and erase his current mentality.

However, M’mai’s contemplative train of thought had led him to the conclusion that, while the Surfer was a good man who fought with honour, his masters were not. M’Nai also wanted to recover his full memories beyond scattered flashbacks.

Determined to learn whom he actually was, Midnight Sun impossibly rose from the cybernetic operating table before his mind could be erased. He easily defeated the guards who poured in. As he faced his creation, Kar-Sagg realised that the automaton he had built was now an actual, sapient  being and that shutting him down would be murder. Thus, he told him to leave.

Surfing with the alien

Midnight Sun established himself on an asteroid near Earth. He hoped to remember whom he was. But he was aware that he had no way to communicate, lacking vocal cords and being unable to move his fingers.

After some months, he spotted the Surfer flying off Earth. Midnight Sun impulsively engaged him, perhaps as an aftereffect of his previous programming. He tried to stop the Surfer from flying away, but could not communicate his desire to learn about himself.

Fighting a delaying action in the hope that he would find some way to express his intent, Midnight Sun brought the Surfer to the surface of the Moon. There the clone was accidentally unmasked and reacted violently to this. The fight was broken up at this point by the powerful Black Bolt, King of the Inhumans.

Sensing a kinship with the mute warrior, Black Bolt, through Karnak, invited Midnight Sun to become a resident of the nearby Inhuman hidden city of Attilan. He hoped that the Inhumans could find a way to communicate with him and perhaps heal his disfigurement. Midnight Sun agreed and thanked the Surfer as he could.

The reanimated kung-fu fighter has not been seen since. One might theorise that he eventually managed to communicate with the Inhumans through computer interfaces, learning about his full past and Fu Manchu. In this scenario, he then decided to leave for the pristine darkness of deep space.

Midnight Sun seems to have the full memories of M’Nai. In particular he remembers his death, then nothing, then resurrection. In time, his memory started coming back, including his childhood with Fu Manchu and his brotherly ties with Shang Chi.

The hypertronic reprogramming did not work too well. His personality is still that of a calm, extremely proficient martial artist who knows exactly what he is doing and counts pitch darkness as his best ally. While he cannot talk, he definitely can think. This train of thought is usually contemplative and Taoist in nature, in a warrior-monkish way.

Midnight Sun was originally programmed with an overriding compulsion to fight and destroy the Silver Surfer. This overtook his maturity and tactical acumen. He’s now rid of that, and his main goal has become finding out about who he is, what he is about and what he should do with his new chance at life.

It is likely his Seeking Justice Motivation has reasserted itself, especially since Midnight Sun sees himself as a just and honourable warrior.

Perhaps he now roams space, silent and cloaked in darkness, as a Chinese-style knight errand equipped with an imperfect Inhuman translator computer.

Bonuses and Limitations:
Martial Artist is Contingent upon his DEX, STR and BODY — though it cannot be brought below 10 by the Contingency Link.

Advantages:
Expertise (Chinese classics), Iron Nerves, Language (Mandarin Chinese, possibly others), Lightning Reflexes, Sharp Eye, Misc.: Midnight does not register on Life Sense for some unexplained reason, as if he were an undead being.

Drawbacks:
Strange Appearance, SPR (Unable to emit any vocal sound), SPR (The disks are permanently grafted to his body – among other things it deprives him of the use of his fingers). His hypertronics were originally programmed with a CIA toward Fighting and killing the Silver Surfer, which was largely erased when he recovered his free will. 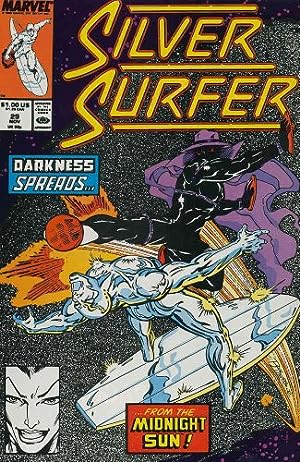 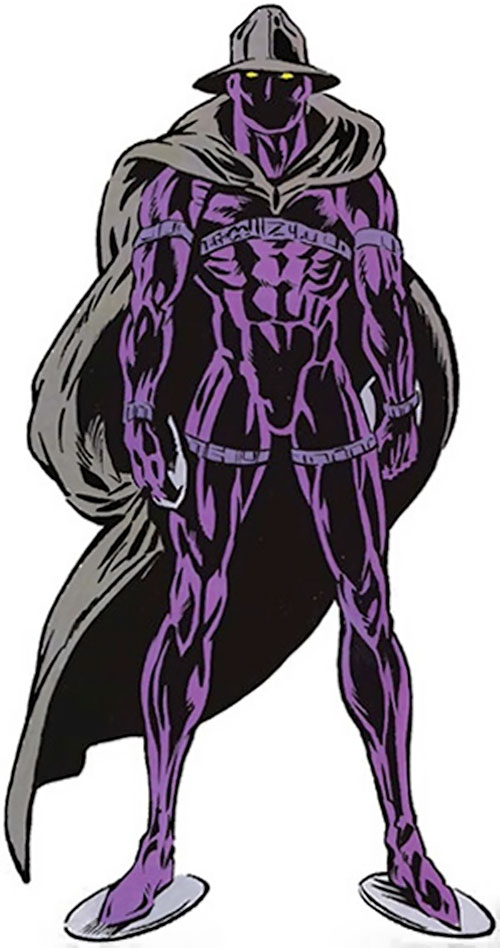 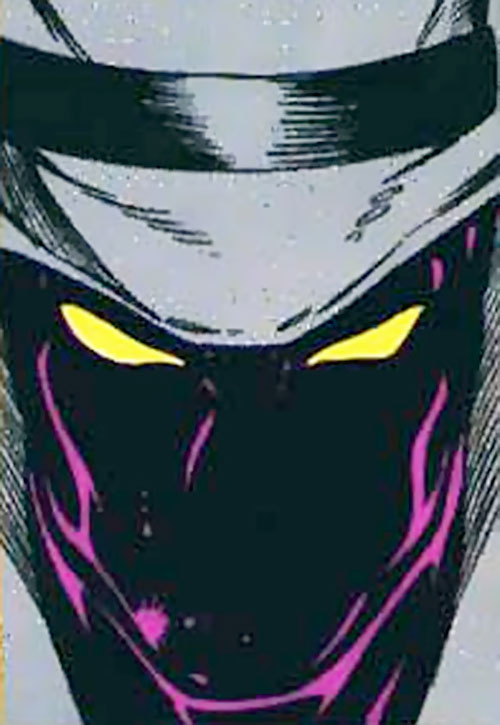 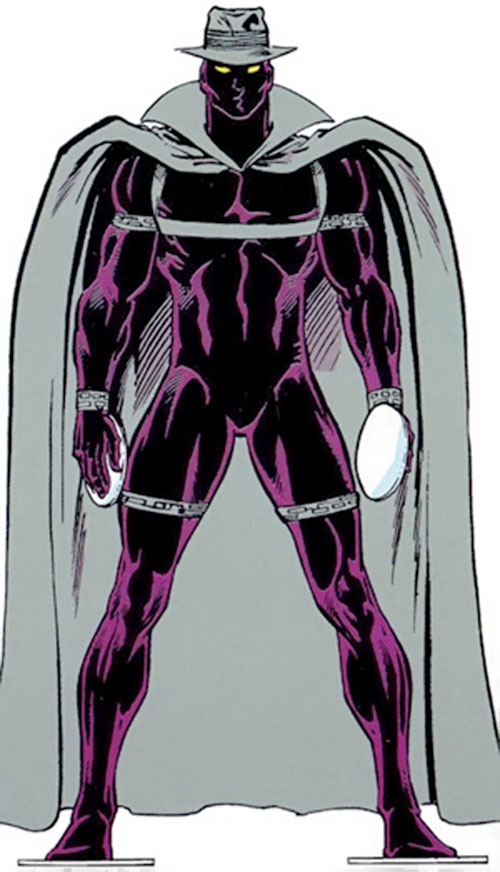