Midnighter’s abilities were designed by Bendix to give him an all encompassing advantage in close-combat and tactical scenarios. In addition to mild superhuman strength, he has great reflexes (and moving speed when necessary), healing, senses, aim and various other enhancements.

He is said to have multiple redundant systems to keep him fighting in the worst of conditions. One example of this is a backup heart. Midnighter can also turn his pain receptors on and off so he can keep fighting when the pain would stop a normal man.

The pain is not totally cut off though, so his healing factor  is also very helpful. He’s fought with, and healed from, a broken neck, broken limbs, holes through his chest, having his whole body set on fire, contracting various viruses (including AIDS), and other things.

About his superboosted immunity system: a cold cannot stay in his system for more than a few minutes, and he beat AIDS completely in 6 weeks. He can also function perfectly in anaerobic environments when necessary, although only for a relatively short while.

The Midnighter’s most famous ability is the power to predict how a battle will happen before it starts.

His fight implants include a combat computer that allows him to run through a given combat situation millions of times in his mind. This almost instantly covers nearly every possible result before the first punch is even thrown. He uses this information to predict the actions and or reactions of his foes, counteracting their moves almost before they even think to make them.

According to Midnighter, his powers also work by letting him see the outcome of the battle he wants, and working backwards, following the right steps to get there. All of this allows for the perfect response and counter attack, and therefore superior combat results. 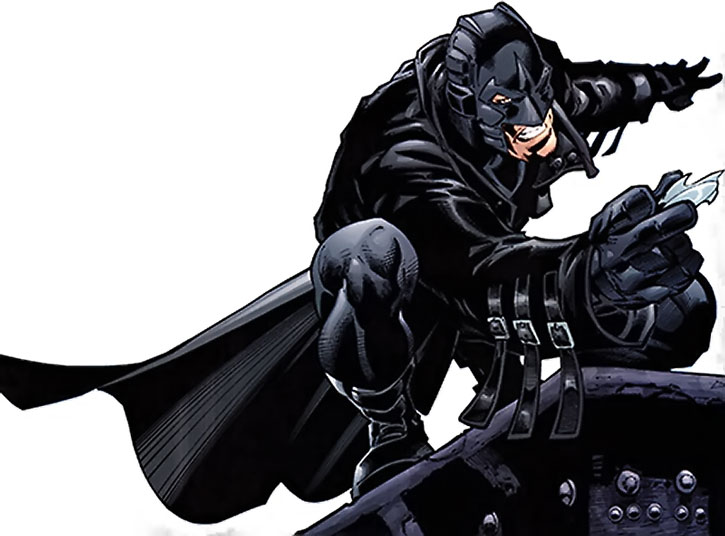 Midnighter’s body has also been altered to give him inhuman balance. He also has faster nerve endings so he can move and react quicker than any human and many super humans. He normally moves at slightly above human speed but can move so fast that enemies with super speed can’t see him.

Midnighter’s senses allow him to detect any modifications or powers in anyone he looks at, as well as how they work, so he can defeat them. His other senses are so powerful that to trick him, his creator needed to find an alien that could not only change its appearance, but its scent and DNA.

While his powers are his best assets, he is rather well-rounded and also adept at intimidation, interrogation, tracking, demolition, lockpicking, piloting and driving.

The Midnighter wears his trademark black leather and a long coat. He wears a symbol on his chest like a sickle moon and an executioner’s hood. The public considers him a dangerous, masked vigilante, but also know him well for his global actions with the Authority.

The Midnighter will mostly be found in costume onboard the Carrier or fighting street crime, but has been known to wear stylish civilian clothing at times.

The Midnighter is said to be Night’s Bringer of War. That means that he is a cynical and very angry man. One might say that he specializes in excess brutality. He personally feels that he is not really a lover, a father or a friend, but a killer… and that’s what he is bred to be: a casual killer.

He is not beyond torturing opponents for information, and only occasionally keeps his word. However, he will never kill children under any circumstances and is also rather strongly opposed to animal cruelty. 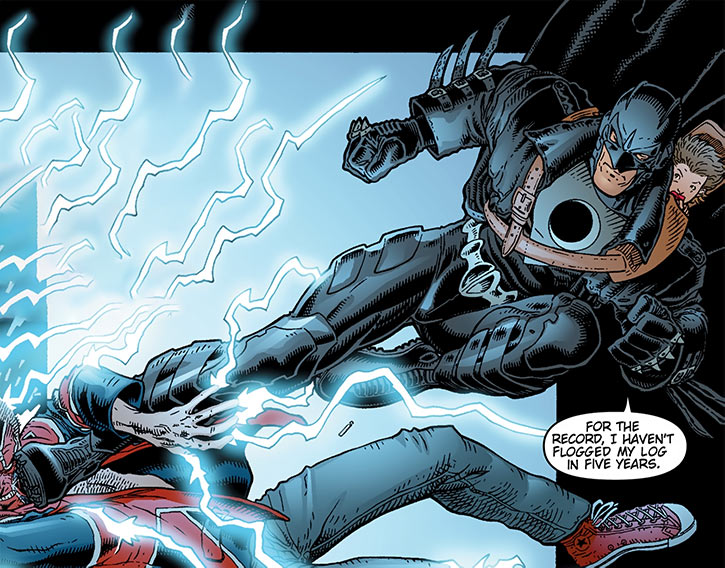 The Midnighter is one of the few characters that is as bad-ass as he talks. He is no person for anybody to model himself after, but rather he is feared by those who know what he is, and justly so. While he appears to be perhaps the most human of the Authority members, this is far from the truth. His enhancements have made him far more than that and he knows it.

He has done many questionable things, but he doesn’t really care as long as justice as he sees it is served. With extreme brutality he regularly cuts down supers with relative ease.

He used to like beginning fights by announcing his ability to calculate millions of combat scenarios before the first punch was even thrown. He has since gotten bored enough with the speech to have it printed on business cards, which he can leave for absent opponents (or by killing them by throwing the sharp-edged cards).

He is also good at leaving at least one alive for questioning, although this is not always the case. He is, of course, the type to enjoy poetic justice, and will track down any perceived evildoers. He does enjoy some initial verbal sparring with his opponents.

In his spare time, he enjoys a good workout, spending time with Apollo or tracking down criminals anywhere in the world. In fact, he is almost always in costume and awaiting the next global threat.

The Midnighter feels like an outsider, but still tried to live a normal life as Lucas Trent in the city of Harmony in Indiana together with a hacker named Mindy. The experience sort of failed and he has since returned to live mostly on the Carrier.

However, even after he found out that Trent couldn’t have been his real former identity, he is sometimes seen in Harmony, perhaps to keep an eye on the Anthem organization or Mindy. In general, he stays away from societies until it’s time to stop another threat. The Midnighter is much smarter than one would expect from appearances.

His relationship with the other Authority members is somewhere above neutral. He doesn’t really see eye to eye with Jack Hawksmoor, but they tolerate each other. Swift is ok, while Jenny Sparks offered him and Apollo a new lease on a productive life, and for that he will mostly follow her advice. The Doctor and the Engineer are seen as useful allies and basically considered friends.

Apollo, his husband, is the light in his life and one of the most important persons in the world to him. Still, they have no problems doing their stuff independently and over relatively long times until another happy reunion. The other important person is his adoptive daughter Jenny Quantum, and perhaps he considers taking care of her return payment for what Jenny Sparks gave him.

Most other people in the world are seen as either opponents or innocents. His one main, redeeming quality is, even if some people see him as a psychopathic nutcase, that when it comes to humanity and society at large his heart actually is in the right place and he genuinely wants a better world.

“We’re building a better world, remember ? One the bastards can’t remake in their image. If that’s not something to be proud of, I don’t know what is.”

“I know what special abilities you have. I can see the enhancements. I can detect the increased electrical activity in your brain. I know what moves you’re preparing to make. I’ve fought our fight already, in my head, in a million different ways. I can hit you without you even seeing me. I’m what soldiers dream of growing into. I’m what children see when they first imagine what death is like. I’m the Midnighter. Put the child down. [Opponent hesitates and is beaten down – hhekkgggk] Told you so.”

“Fucking typical ! As soon as we take over the world, it starts to fall apart at the seams…”

(To Kyle Rayner) “Hey, Ring Boy, or whatever the hell you call yourself…don’t come back.”

“Sleeping in boxes and eating leftover pizza for the past 12 months has built up a lot of negative energy in me, Apollo. Treating these dirtbags to a little eye-gouging and neck-breaking for a few minutes might be just the kind of cathartic exercise I was looking for.”

“All those super-Gods — Apollo, Jenny Quarx, Engineer, Zealot, Majestic, Spartan — but it was some grouch in a leather jacket that terrified them. So just get the Hell over yourself, tough guy.”

“He makes a lot of noise and heals fast, but if you mortally wound him every couple of seconds it seems to do the trick.”

“I’m fed-up with everybody thinking I’m some kind of psychopath, Apollo. You’d better shut up and let me do the talking when we’re on Conan O’Brien next week.”

“Leave this to me. You said Kriegstein’s creations are simultaneously attacking every capitol city in the world, Hawksmoor. Like it or not, that means the only way to we’re going to beat him is to split up and defend each country individually. Besides, the day I can’t mutilate 30 radioactive teenagers is the day I hang up my coat for good.”

Drawbacks:
Married (Apollo, 0 pts), Misc. Loss Drawback (During phases when Weakness Detection is rendered non-useable the AV and EV of all his offensive moves drop by two column shifts each).

He has already won, but you don’t know it yet !

Enemies commonly underestimate the Midnighter as he seems to have no powers. His powers, however, are tactical and defensive, and in combination make him into an extremely lethal opponent. He sees and calculates the outcomes of all possible combat scenarios whenever facing an opponent, and can then choose any one of the scenarios leading to his victory.

In this manner he can defeat vastly superhuman opponents despite only being borderline superhuman himself. His uncanny world view is well demonstrated by the following quote:

“See, I’m one of those jerks who always skips ahead to the last page of a book before he reads it. I find a closing scene I love, then work my way back to the beginning to figure out exactly how it all went down. It’s the same way my crazy brain processes every possible outcome for a battle before the first punch is even thrown. So let’s cut to the chase, shall we ? I’ve already run through a trillion potential versions of this entire day in my head, including the spectacularly banal conversation we’re about to have. And I’ve settled on the finale that leaves your sick operation toppling like a house of cards…and me making love to my husband.”

This means that he can and does mow down groups of supers in short order and is capable of, for example, by striking at the weakest points, beheading bulletproof opponents with little trouble. However, his abilities seem to be relatively useless against god-like opponents such as Mr. Majestic, Seth etc.

As is rather typical for members of large, international superhero groups, he fights less effectively on his own. Whenever adventuring on his own, as in the Midnighter books, his HP total is temporarily reduced down to 050. 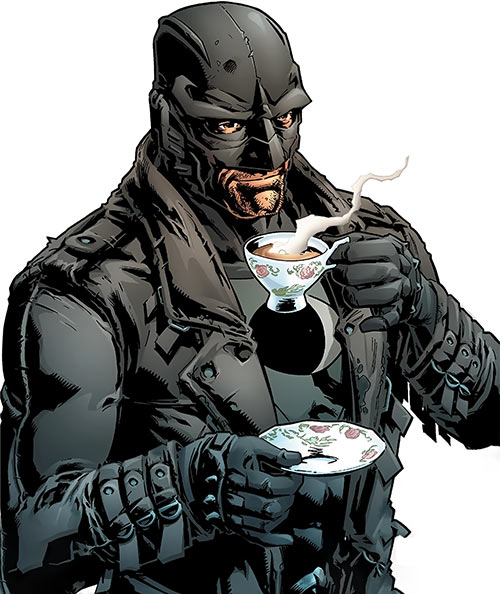 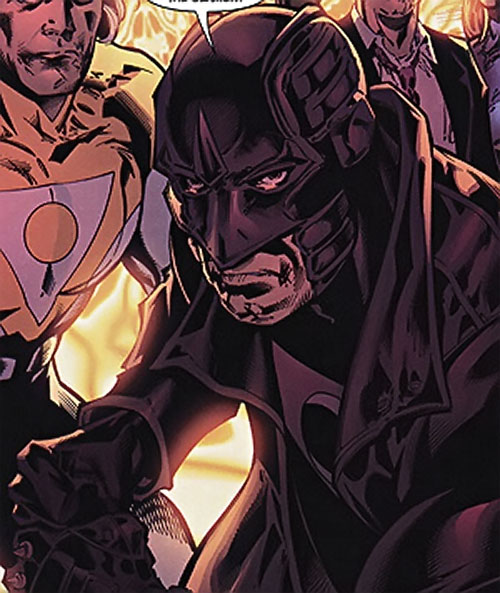 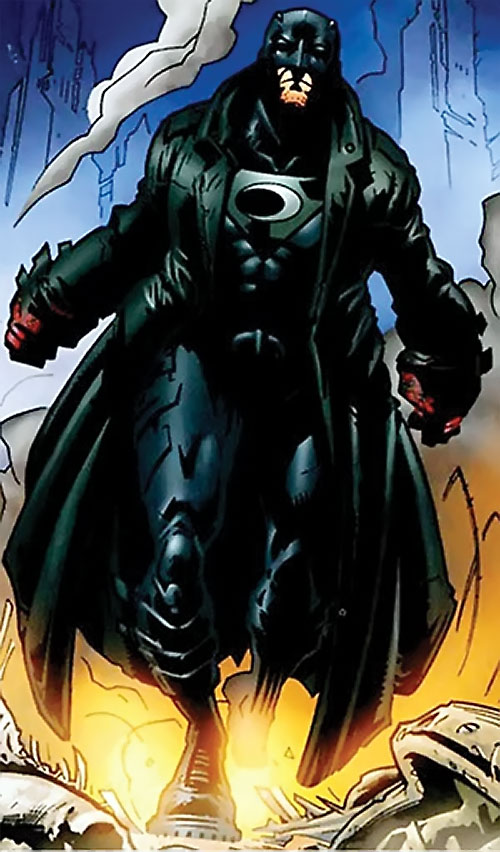 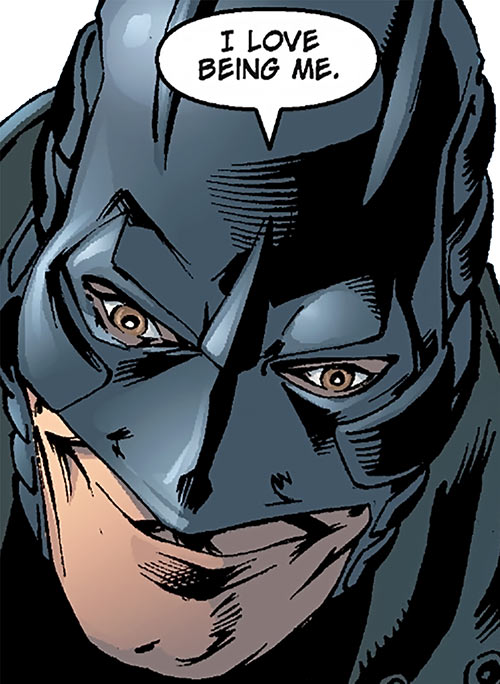 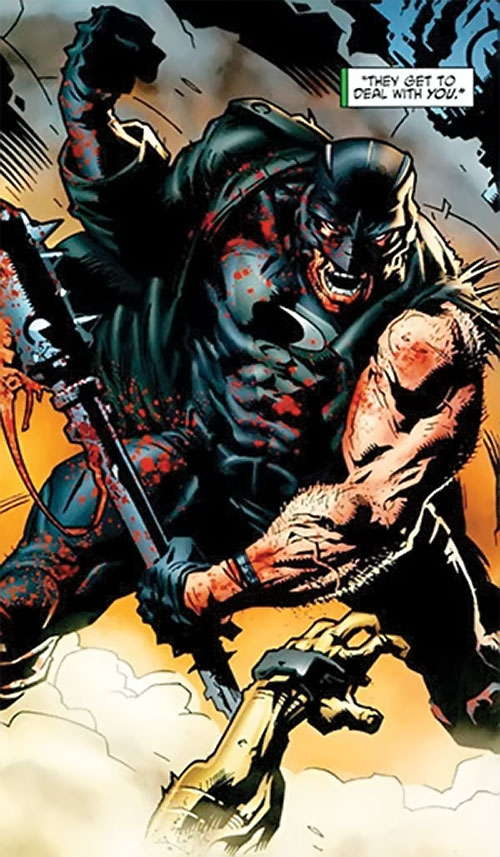 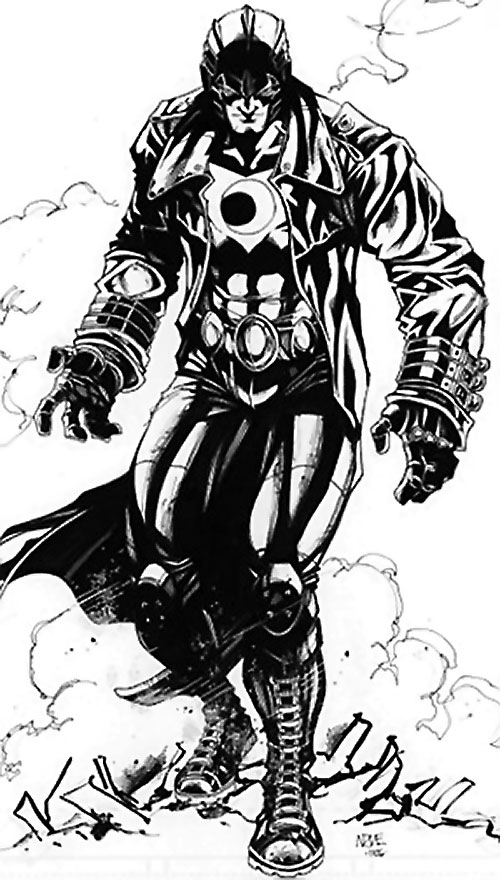 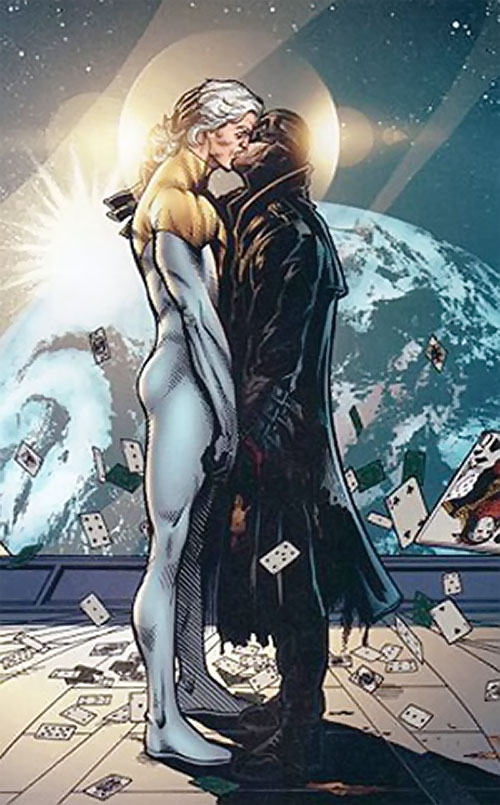